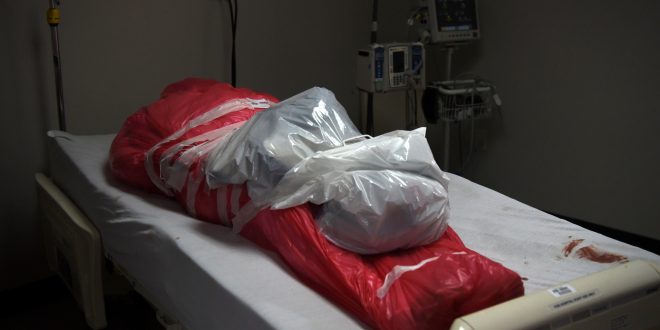 How scientists know COVID-19 is way deadlier than the flu

For James Scott, the worries began in late May. It was about a month after Texas began relaxing restrictions on businesses and public gatherings, and Scott was looking at a model he had developed to predict COVID-19 deaths using cellphone mobility data. As he watched the dramatic rise in people visiting restaurants, bars, gyms, and concert venues, he felt it was only a matter of time before the state’s cases surged—and the deaths wouldn’t be far behind.

“It’s like Bob Dylan said: You don’t need to be a weatherman to know which way the wind blows,” says Scott, who works at the University of Texas at Austin, where his model is assessing whether changes in mobility patterns can predict coronavirus mortality.

Texas is just one of the states that has experienced a surge in coronavirus cases over recent weeks after relaxing its physical-distancing guidelines. However, while the death toll so far hasn’t risen to match, experts caution that the coronavirus has not lost its deadly kick. For one, the disease takes a while to kill, and humans take even more time to record the pandemic’s fatalities due to administrative red tape. The people who are dying today were likely infected three to four weeks ago. (See where cases and deaths are growing and declining.)

What’s more, scientists today have a better sense of how to measure COVID-19’s lethality, and the numbers are alarming. Using a more sophisticated calculation called the infection-fatality rate, paired with the past few months’ worth of data, the latest best estimates show that COVID-19 is around 50 to 100 times more lethal than the seasonal flu, on average.

This means that the U.S. and other countries seeing case surges need to brace for a very deadly summer and autumn if tactics don’t change.

“You don’t need to do a lot of calculations to know that 128,000 deaths is an extreme number of people who have passed away,” says University of Wollongong epidemiologist and self-described health nerd Gideon Meyerowitz-Katz, citing the current death toll in the U.S.

How to measure COVID-19’s lethality.

The question is, How bad will things get?

Now, after months of studying the pandemic’s ebb and flow around the world, scientists are turning to a similar but more comprehensive metric: the infection-fatality rate. This statistical tool uses data on known infections, including best estimates for undiagnosed and asymptomatic cases, to put numbers on how likely it is for an infected person to die from the disease. This kind of calculation is done every year for seasonal influenza.

Scientists can use two strategies to estimate the infection-fatality rate, explains Meyerowitz-Katz. They can estimate the number of infections using serology studies, which test people for antibodies against the coronavirus. These tests can reveal whether a person has been infected even if they don’t show symptoms. Or, researchers can use statistical methods to infer the total number of infections based on what’s known about the number of confirmed cases and the estimates for asymptomatic infections.

Using a statistical model, epidemiologists at Columbia University estimated the infection-fatality rate for New York City based on its massive outbreak from March 1 to May 16. Their results, published online as a non-peer reviewed preprint on June 29, show that the coronavirus may be even deadlier than first thought. According to their data, the COVID-19 infection-fatality rate is 1.46 percent, or twice as high as earlier estimates (and much higher than a misinformed rate being widely shared on social media). This risk varies by age, with those older than 75 having the highest infection-fatality rate, at 13.83 percent.

In an informal analysis published on Medium, Meyerowitz-Katz compared the infection-fatality rates from influenza to several calculated around the world so far for COVID-19. Like COVID-19, influenza also has a high number of mild and asymptomatic infections. These cases are not accounted for in the majority of calculations of influenza severity made by the U.S. Centers for Disease Control and Prevention, which rely instead on hospitalizations. For the flu, doctors and hospitals are less concerned with mild cases that don’t require major treatment.

Using the handful of studies that have calculated infection-fatality rates for seasonal flu, Meyerowitz-Katz determined that somewhere between 1 and 10 people die for every 100,000 that are infected. For COVID-19, that number ranges between 500 and 1,000 deaths per 100,000 infections. By his calculations, the coronavirus is likely to be 50 to 100 times more deadly than the seasonal flu, which supports the Columbia University findings.

These numbers are somewhat academic, Meyerowitz-Katz says. “It’s not like we don’t know what a really bad situation could look like.” But they are still valuable for communicating the situation to a public that is straining under social-distancing rules.

Part of the problem with communicating the true death rate is that COVID-19 fatalities have been especially challenging to track in a timely manner. Registering that a death has occurred and determining its cause are two basic functions of public health. Even in situations less chaotic and slower-moving than COVID-19, it can take several days for state officials to receive notification of a death. States then forward their data to the CDC’s National Center for Health Statistics, where the death and its cause are logged.

Due to the significance of the COVID-19 pandemic, the CDC has added an extra step in which the agency uses humans instead of computers to verify the information on the death certificate before they formally add it to their tally. Although the CDC has gotten much faster at performing this task since March, it is still taking around a week to formally record a coronavirus death, says Kirk Bol, manager of the Vital Statistics Program at the Colorado Department of Public Health and Environment.

This bureaucratic delay exists on top of the natural biological processes of illness, says Jennifer Nuzzo, an epidemiologist at the Johns Hopkins Center for Health Security. If someone is infected with the coronavirus today, they generally won’t start to show symptoms for four to five days, on average, but it could take up to two weeks.

A CDC analysis found that severe difficulty breathing began about five to eight days after the start of symptoms, and admission to the ICU happened 10 to 12 days after they first became sick. COVID-19 patients from California and Washington State were hospitalized an average of 12.7 days before they died. Add everything up, and it could take more than a month to go from infection to death. (Here’s how to stop the virus from winning.)

The young and the restless?

In addition, age may factor in the current death lag. More young people under 35 are becoming infected now compared to the last few months of the pandemic, and these individuals are less likely to die than their elderly counterparts. What concerns University of South Florida epidemiologist Jill Roberts isn’t just the growing number of infections in young people, but also the fact that they are likely to pass the virus to their older, more vulnerable contacts.

In a June 19 survey of 4,042 adults, the CDC found that 43.1 percent of those ages 18 to 29 said they would feel safe if social-distancing orders were lifted, compared to 19.2 percent of those over 65. Roberts and Nuzzo also note that workers in the hospitality industry have traditionally been younger, and as those businesses have re-opened, workers may no longer be able to self-isolate.

Although younger people continue to be at a lower risk of dying of coronavirus, many will require hospitalization at a time when these facilities are already overwhelmed with their older counterparts. Back in March, adults under 50 made up a quarter of all hospitalizations in the U.S., but this share has increased by 10 percent since the beginning of May

“But the more people that need hospital beds, the harder it is to deliver quality care,” Nuzzo says. “And all of the clinical workers have been working nonstop for a really long time.”

So, the latest run on medical centers may potentially increase mortality rates for all age groups. What all of this means, says Scott of UT Austin, is that it’s likely only a matter of time until the death rate begins to rise rapidly.

Previous Fact Check: Hospital Ward or Seminar Room, the Truth of Modi’s Visit to Injured Soldiers
Next Horseshoe crab blood is key to making a COVID-19 vaccine—but the ecosystem may suffer.