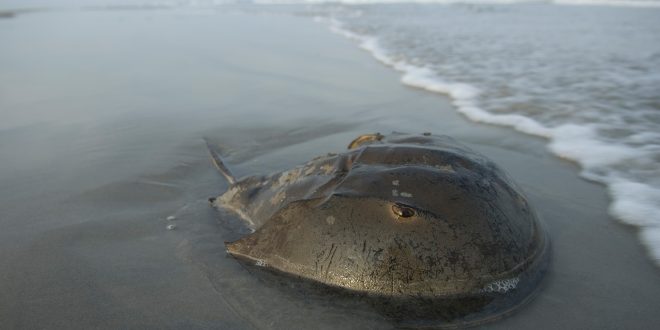 Horseshoe crab blood is key to making a COVID-19 vaccine—but the ecosystem may suffer.

Each spring, guided by the full moon, hundreds of thousands of horseshoe crabs clamber onto beaches across the U.S. mid-Atlantic to lay their eggs. For hungry birds, it’s a cornucopia. For drug companies, it’s a crucial resource for making human medicines safe.

That’s because these animals’ milky-blue blood provides the only known natural source of limulus amebocyte lysate, a substance that detects a contaminant called endotoxin. If even tiny amounts of endotoxin—a type of bacterial toxin—make their way into vaccines, injectable drugs, or other sterile pharmaceuticals such as artificial knees and hips, the results can be deadly.

“All pharmaceutical companies around the world rely on these crabs. When you think about it, your mind is boggled by the reliance that we have on this primitive creature,” says Barbara Brummer, state director for The Nature Conservancy in New Jersey.

Every year, pharmaceutical companies round up half a million Atlantic horseshoe crabs, bleed them, and return them to the ocean— after which many will die. This practice, combined with overharvesting of the crabs for fishing bait, has caused a decline in the species in the region in the past few decades.

In 1990, biologists estimated 1.24 million crabs spawned in Delaware Bay, a main egg-laying spot and prime collection point for the companies. By 2002, that number had dropped to 333,500. In recent years, numbers of Delaware Bay spawning crabs have hovered around the same amount, with the 2019 survey estimating about 335,211. (The pandemic canceled the 2020 crab count.)

Catching crabs and harvesting their blood is time-consuming, and the resulting lysate costs $60,000 per gallon. In 2016, a synthetic alternative to crab lysate, recombinant factor C (rFC), was approved as an alternative in Europe, and a handful of U.S. drug companies also began using it.

But on June 1, 2020, the American Pharmacopeia, which sets the scientific standards for drugs and other products in the U.S., declined to place rFC on equal footing with crab lysate, claiming that its safety is still unproven.

Human health and safety, especially for something as high stakes as the coronavirus vaccine, is paramount, says Brummer. But she and other conservationists fear that without rFC or other alternatives available, the ongoing burden on horseshoe crab blood for COVID-19 vaccines and related therapeutics may imperil the crabs and the marine ecosystems that depend on them.

A written statement from Lonza says that testing the company’s COVID-19 vaccine will not require more than a day’s worth of lysate production from the three U.S. manufacturers.

One of those three—Charles River Laboratories, based in Massachusetts—gave National Geographic the same statistic. The laboratory’s John Dubczak explained in an email that to make five billion doses of the COVID-19 vaccine, 600,000 tests will be performed, which will use the amount of lysate created in a single day.

Nearly unchanged for hundreds of millions of years, horseshoe crabs have some unusual traits. Despite their name, these creatures are more closely related to spiders and scorpions than crabs. They also have nine eyes—two compound eyes and seven simple ones. (Read more about how horseshoe crabs evolved.)

Scientists eventually figured out how to use the amebocyte lysate to test drugs and vaccines, and in 1977, the U.S. Food and Drug Administration approved horseshoe crab lysate for this use.

Since then, each May the helmet-shaped creatures are brought en masse to specialized labs along the U.S. East Coast, where technicians extract the blood from a vein near the heart before returning them to the sea. (Their blue blood comes from the metal copper in their oxygen-transporting proteins, called hemocyanin.)

In the 1980s and through the early 1990s, the process seemed sustainable. The pharmaceutical industry claimed that only three percent of the crabs they bled died. Population surveys showed that the crabs were plentiful, and conservationists didn’t place much value on the species, says Larry Niles, a biologist with the Conserve Wildlife Foundation of New Jersey.

But by the early 2000s, the picture began to shift. Annual horseshoe crab counts during spawning season revealed smaller numbers, and a 2010 study found that as many as 30 percent of the bled crabs ultimately died—10 times as many as first estimated.

“What we’re fighting isn’t just a battle about horseshoe crabs. It’s about keeping ecosystems productive,” says Niles, who has spent his career researching the environment and species of Delaware Bay.

Lonza, the Swiss corporation, says it is “committed to protecting the welfare of the horseshoe crab,” for instance by “actively supporting conservation efforts.”

According to the statement from Lonza, Charles River Laboratories and another lysate maker, Associates of Cape Cod, Inc., raise horseshoe crabs in hatcheries and release them into the ocean. Lonza reports that in 2019, the Cape Cod company reintroduced 100,000 juvenile crabs into the waters around Massachusetts and Rhode Island.

Lonza’s statement says the company would also prefer to use lysate alternatives and has trademarked its own rFC, called PyroGene. But, as the American Pharmacopeia decision illustrates, “regulatory hurdles remain. We remain hopeful that the barriers preventing drug developers from using the synthetic alternatives are starting to fall,” the statement says.

Meanwhile, conservationists are monitoring the impact to the species that rely on horseshoe crab eggs as vital food sources.

Sport fish that once were numerous, such as striped bass and flounder, have plummeted in number in the region, in part due to fewer horseshoe crab eggs, Niles says. Diamondback terrapins, a type of reptile that’s vulnerable to extinction, also depend on this seasonal buffet.

Both Niles and Brummer are particularly concerned about migratory shorebirds, such as red knots and ruddy turnstones, which stop at Delaware Bay on their 9,000-mile journey from iTierra del Fuego in Chile to Arctic breeding grounds. These birds need tremendous amounts of energy for their long-distance flights, and calorie-rich horseshoe crab eggs are the perfect fuel. (Read how climate change is shrinking red knots.)

During their two-week sojourn on Delaware Bay, red knots nearly double their body weight to prepare for the final leg of their voyage. This year, however, cool temperatures delayed crab spawning, and only 30,000 red knots stayed in the bay, a drop from an estimated 40,000 birds in 2019.

Niles cautions that a weakening of one link in the food chain can reverberate, with potentially disastrous consequences. The depletion of horseshoe crabs could ultimately eliminate benefits that tourists, fishermen, and others get from enjoying the bay.

“The value of a natural resource,” he says, “doesn’t belong to companies that are exploiting it. It belongs to us.”