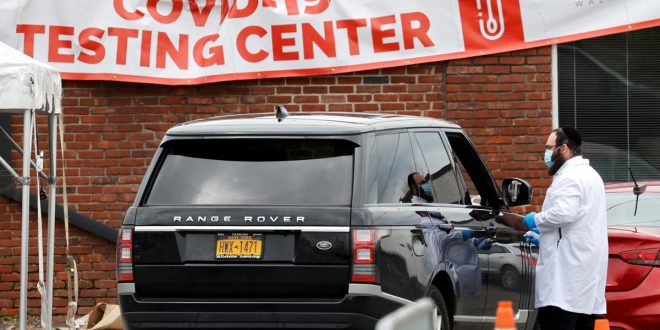 (Reuters) – Health policy experts say the United States must dramatically increase the availability of tests for the coronavirus if it is to safely reopen its economy.

U.S. regulators have moved speedily to authorize many new tests, but concerns still remain about tests’ accuracy, and some policymakers say new testing technologies need to proliferate to fully contain the virus.

Molecular diagnostic tests show who has contracted the virus. Most rely on samples collected from patients using nasal swabs. The samples are then analyzed using a method called polymerase chain reaction (PCR), which detects viral RNA. These tests can be highly accurate, in some instances detecting the virus in 95% of cases.

The first diagnostic tests to get U.S. regulatory approval required that a sample be shipped back to a laboratory to be analyzed, slowing the speed at which patients could receive results. More recently approved diagnostic tests can be conducted at the same location where the sample is taken and provide results in minutes.

Authorized for use by U.S. regulators in March, Roche’s website says it is currently shipping around 8 million tests per month. It requires a sample taken by nasal swab be sent back to a lab for analysis. Roche says studies show it can detect very low levels of the virus with 95% accuracy.

Approved in late March, Abbott’s rapid, point-of-care molecular diagnostic test can provide results on site to patients within minutes. As of May 4, Abbott said it is producing 50,000 of these tests per day, and plans to ramp up to 2 million by June. A study conducted by the Cleveland Clinic showed the test detected the virus in around 85% of cases.

Earlier this month, U.S. regulators authorized the first antigen test, a new category of diagnostic test. This type of test scans for proteins that can be found on or inside of a virus. They test samples taken from the nasal cavity using swabs. Antigen tests can detect the virus very quickly and can potentially be produced at lower cost.

The U.S. Food and Drug Administration says antigen test production can potentially scale to millions per day. But they produce false negatives at a higher rate than molecular diagnostics tests.

Authorized for use earlier this month, Quidel said the test picks up around 80% of COVID-19 cases.

Antibody tests take small samples of patients’ blood and scan them for antibodies, which the immune system produces in response to a virus. They can be conducted in labs or through on-site tests that provide results in minutes.

Antibody tests, also known as serological tests, are not as effective as molecular diagnostic tests in catching COVID-19 at early-stages, when patients may not yet be producing antibodies. But they can confirm if patients previously had the virus and have antibodies that might protect them against future infection.

The FDA recently tightened rules on serological test developers after a proliferation of unauthorized tests raised questions about their reliability. Researchers have not confirmed whether recovered patients who are producing antibodies are fully immune to COVID-19.

Researchers at the University of Washington School of Medicine say the test, which Abbott launched in April, has a specificity of 99.9% and a sensitivity of 100%, suggesting very few false positives and no false negatives. Abbott has already shipped more than 10 million antibody tests to hospitals and labs.