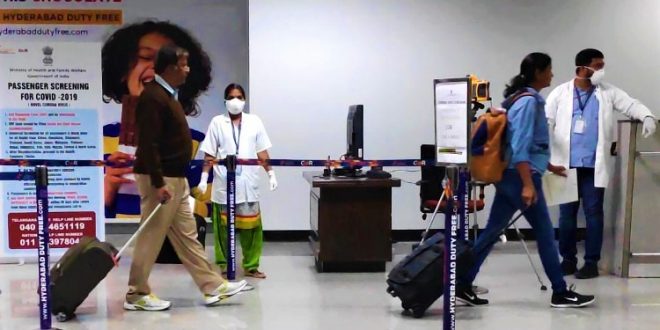 Telangana also recorded its first COVID-19 death as the total number of cases in the state rose to 67 on Saturday.

Four people, who were among the health personnel deployed at Hyderabad’s Rajiv Gandhi International Airport (RGIA) for screening passengers who returned from foreign countries, were among those who tested positive for COVID-19 in Telangana this week.

Speaking to reporters, Telangana Health Minister Eatala Rajender said that the four personnel are now in isolation wards and are undergoing treatment. A family member of one of the affected persons also contracted the virus, the minister said.

Telangana also recorded its first coronavirus death on Saturday. A 74-year-old from Khairatabad in Hyderabad with a travel history to Delhi, who was tested after he had died on Thursday, was found to be infected with COVID-19.

The 74-year-old was admitted at a private hospital with pneumonia-like symptoms. However, he didn’t respond to the treatment and succumbed. Health authorities were later informed about the death, and following an examination, authorities tested the body and confirmed that he had died due to coronavirus. Authorities have already traced the contacts of the 74-year-old and kept them in isolation, the Minister said.

Including the death, eight new cases of COVID-19 were recorded in the state taking the overall count of cases to 67. Taking the death into consideration, there are 65 active cases in the state, as one patient had previously been discharged.

According to the Minister, besides the 74-year-old, five other patients who tested positive on Saturday were family members. However, he did not specify further details. The Health department is yet to issue a medical bulletin with the details.

The minister said that the state witnessed as many as 22 cases because of four families– a family in Hyderabad’s old city, one from Nampally, a doctor couple from Quthbullapur, and a family living in Khairatabad.

However, in a silver lining, the minister also informed reporters that 10 patients who were availing treatment, had tested negative. “One more round of tests will be conducted on Sunday and if their tests come negative again, they will be discharged,” Eatala Rajender said.

Responding to the news about the “red zones” in several parts of Hyderabad and Rangareddy district, the minister said that they don’t have any such zones, and instructed the authorities to remove those boards.

However, TNM has confirmed that at least seven areas in Ranga Reddy district, which covers a large part of Hyderabad including the IT sector, have been marked as ‘containment zones’. This includes specific areas in Miyapur, Chandanagar, Gachibowli and Kokapet to name a few.

This means a radius of 1 km is marked as containment zone and movement is restricted. Other than surveillance and contact tracing, authorities also do perimeter control to ensure there is no outward movement from the zone and no influx of population.

The state had reported its first positive case on March 2. The patient was discharged two weeks later.

The Health Minister said the number of persons under quarantine had come down from 20,000 to 13,000 and this is likely to drastically come down in 4-5 days.