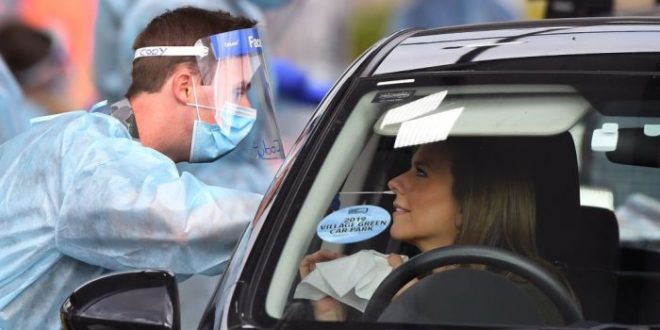 Getting a COVID-19 test? Don’t get caught out by misinformation on social media

Melbourne is in the midst of a testing blitz to control the latest coronavirus outbreak.

But on social media, this increase in testing has been accompanied by a rise in misinformation and conspiracy theories focusing on the reliability and safety of COVID-19 testing procedures.

Among other claims, some posts incorrectly suggest that a common type of COVID-19 test is unable to detect the virus or may be harmful.

These tests detect the presence of the SARS-CoV-2 virus and can involve having a swab inserted up one or both nostrils, or into the back of your throat. Some people find this method uncomfortable, but they’re not dangerous.

In Victoria, a Department of Health and Human Services spokesperson said 1,068,000 COVID-19 tests had been processed to date.

“PCR tests are used in Victoria and are one of the most common ways to test for coronavirus,” he said.

“They are considered to be the most reliable and are regularly assessed for efficacy as part of the validation studies in laboratories.”

Yet there are people are refusing to be tested, despite the spike in locally acquired cases in some parts of Australia.

It’s unclear if the misinformation circulating online is causing any of those in hotel quarantine or residents in Victoria’s lockdown suburbs to refuse tests.

But a DHHS spokesperson later told The Guardian this had not emerged as a reason for people refusing tests.

“People have declined a test for reasons such as not wanting to do nasal swabs and showing a preference for saliva testing, and language barriers — which our massive team of door-knockers try to overcome,” the spokesperson said.

David Sommerville has been frustrated by seeing people he knows spread misinformation about the tests on Facebook.

He fears that confusion about the tests will lower testing rates and put vulnerable people at risk of illness or death.

“I’ve seen them shared by friends and acquaintances, who are promoting scaremongering and false information — some of it clearly written in America because they use terms like Q-tips,” Mr Sommerville said.

Articles containing misinformation have been seen by tens of thousands of people and may lead to baseless doubts about the PCR test’s effectiveness.

Data from social media analytics company BuzzSumo shows that five of the top 10 test-related pieces of web content in the past month, in terms of driving the most engagement, were articles falsely claiming that the inventor of PCR, Nobel laureate Kary Mullis, denied the test could effectively detect infectious viruses. Websites promoting this claim include independent news publishers and anti-vaccine blogs.

According to Reuters Fact Check, this is not true. The quote was misattributed to Mullis and was not about COVID-19 testing.

Despite being incorrect, posts citing these claims with text like “COVID-19 Test A FRAUD?” have spread widely through Australian Facebook groups and have been promoted by anti-vaccine campaigners.

Colin Klein from the Australian National University has researched how conspiracy theories spread and grow online. He said it makes sense that groups who doubt the seriousness of COVID-19 would latch onto new, related conspiracies.

“You’re already primed to believe something like this,” Dr Klein said.

Another version of the misinformation shared in Australian conspiracy-theory Facebook groups incorrectly claims PCR tests can “break the blood-brain barrier” and allow “bacteria & other toxins to enter your brain & infect the brain tissue which can lead to inflammation and sometimes death”.

That post has been marked as false information by Facebook and debunked by the Associated Press’s Fact Check team, which confirmed the swab does not touch the blood-brain barrier.

First Draft, which tracks misinformation trends, has also observed text circulating in English, French and Spanish from early July that calls the test into question, without basis.

One version of the misleading “leaky brain” post links to a page on the Mindd Foundation, an Australian alternative health group, which discusses the blood-brain barrier but makes no mention of the coronavirus.

According to Crowdtangle data, the link has been shared by dozens of Facebook pages associated with anti-vaccination and QANON conspiracy theories, a number of which have almost 200,000 followers.

Some of these groups promote seemingly conflicting claims, suggesting that COVID-19 is a hoax while simultaneously suggesting the tests aren’t effective at detecting it.

People who believe in conspiracies are motivated by distrust of authority and a belief they’re being deceived, Dr Klein said, which can override inconsistencies between theories.

Many reasons why people avoid tests

This surge in misinformation comes as Australia confronts the Victorian COVID-19 outbreak and tries to ensure public health messaging will encourage anyone with symptoms to get tested.

Jane Williams, a researcher from Sydney Health Ethics at the University of Sydney, recently wrote in The Conversation about why people might refuse COVID-19 testing.

She said we still do not know enough about the motivations of those avoiding tests — whether they feel confusion, fear or financial concerns — nor can we currently measure the impact of online misinformation on those decisions.

“If somebody showed up at my door and said, ‘I want you to do that COVID test now’, that would be quite confronting,” she said. “A test result is not a neutral thing.”

Dr Williams suggested it could also be useful to examine vaccination as a comparison.

“Misinformation drives some to not vaccinate but the large majority of non- or under-vaccination is not due to beliefs but rather practicalities,” she said, such as the ease and cost of access.

Some of the Australian Facebook groups sharing misinformation about testing have a history of calling the virus a hoax, and spreading conspiracy theories about social distancing and the lockdown.

In recent weeks, he has observed increasing concern about tests and testing shared on social media.

Some are also spreading concern about the physical impact of testing. “There’s this strong line here of it being unnatural or risky,” he said.

In general, he’s so far observed that anti-test posts seem to have emerged largely from overseas, rather than Australia — but they are being shared here.

“A lot of the anti-test lines also come from people who are arguing one of two things: either, this isn’t really a condition — why take a test when there’s no need?” he said.

“Or people who are claiming that the medical profession and politicians are overstating the [situation] in order to make people scared.”