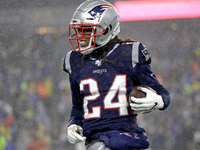 Gilmore becomes 1st CB to win DPOY in a decade

The first-team All-Pro and 2020 Pro Bowl selection earned the honor as a result of tying for the league lead in interceptions with six. His 20 passes defended also led the NFL in 2019.

With Gilmore essentially eliminating one side of the field, New England finished first in total defense (yards per game allowed) at 275.9 and interceptions (25). Gilmore also finished tied for second in interceptions returned for touchdowns (two) and third in passer rating allowed (47.4, per Pro Football Focus).

Five cornerbacks have won the award in its history, and it’s been 10 years since the last — Packers DB Charles Woodson — took home the honor. The other four came before the turn of the century: Deion Sanders (1994), Rod Woodson (1993), Lester Hayes (1980) and Mel Blount (1975). Troy Polamalu was the last defensive back to win DPOY honors (2010).

The 29-year-old Gilmore is the first Patriots player to win AP Defensive Player of the Year.