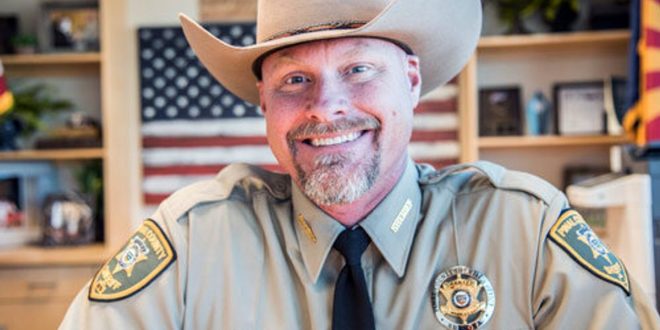 A Republican sheriff in Arizona who in April said he would refuse to continue enforcing the state’s coronavirus lockdown order has tested positive for the contagion during a visit to the White House.

Pinal County Sheriff Mark Lamb announced his positive diagnosis on Facebook Wednesday. Lamb said he likely contracted the virus at a campaign event Saturday. He was asymptomatic when screened at the White House on Tuesday, where he said he’d been invited to join President Donald Trump.

Trump on Tuesday announced his executive order on police reform.

Lamb said he would self-quarantine “for the next 14 days minimum.” The Pinal County Public Health Department is tracing everyone who came into contact with him following the campaign event.

“Unfortunately, as a law enforcement official and elected leader, we do not have the luxury of staying home,” he wrote. “This line of work is inherently dangerous, and that is a risk we take when we sign up for the job.”

Pinal County deputies would “educate and advise” business owners flouting the restrictions but would not make arrests, Lamb told the Phoenix New Times at the time.

“I’m not trying to change his policy, I’m just disagreeing with it, and I won’t enforce it. I don’t think it’s right,” said Lamb, who described the order as unconstitutional. “I don’t want to make criminals out of people who are just trying to keep their business from going under,” he explained.

Arizona’s statewide stay-at-home order was lifted on May 15.

This week the state experienced a record rise in confirmed cases of the virus.

At least 40,000 people in the state have now been sickened by the disease, according to the Arizona Department of Health Services. It has killed more than 1,200 people statewide.

The nationwide death toll is expected to pass 120,000 in the coming days.

President Donald Trump, meanwhile, is reportedly planning to attend a 2020 campaign rally on Tuesday at the Dream City Church in Phoenix.

The president will hold a similar event at the 19,000-capacity BOK Center in Tulsa, Oklahoma, on Saturday. Public health officials have warned against hosting the indoor rally, however, over fears it could supercharge the spread of the virus.