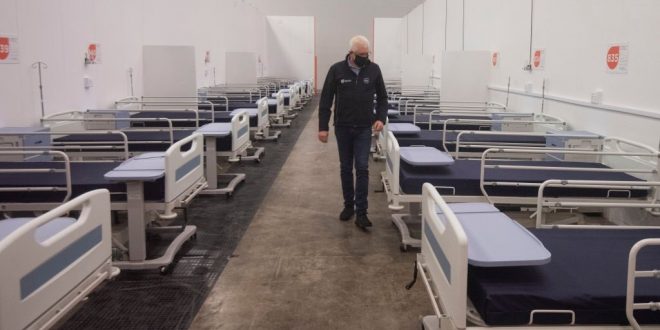 The Western Cape government has announced that it has cleared the province’s Covid-19 testing backlog.

The announcement, as well as several other significant updates, was revealed on Thursday at a weekly briefing led by Premier Alan Winde.

In recent weeks, questions have been raised about government’s testing strategy when it was revealed that there was a testing backlog of over 96 000.

As at 25 May, the Western Cape had a backlog of around 18 000 tests, while the Eastern Cape, KwaZulu-Natal and Gauteng each had backlogs of over 22 000 cases.

Last week, the National Health Laboratory Services told Parliament 105 023 tests were done in the first week of June. This is already almost half of the 232 862 tests that were done in the whole of May and more than April’s 94 203 tests.

The briefing also heard that in more than half (52%) of all Covid-19 deaths in the Western Cape the victims had been suffering from diabetes as a comorbidity (see slide).

High blood pressure was associated to 19% of the deaths as a comorbidity, HIV 12%, kidney disease 9%, 4% to previous tuberculosis (TB) suffers and 2% to people who were infected with TB at the time of death.

In a third major announcement, four Covid-19 patients have died at the new Hospital of Hope, located at the Cape Town International Convention Centre, said Dr Keith Cloete, head of department in the Western Cape Department of Health.

Cloete said there had been a total of 88 admissions to the field hospital, with 57 having been discharged. At the new Covid-19 hospital in Khayelitsha, there have been eight deaths – out of 72 admissions, with 36 patients discharged.

On the so-called “doubling time”, spoken about by President Cyril Ramaphosa during his address to the nation on Wednesday night, the briefing led by Winde heard the province uses the death rate as the basis for its own “doubling time” – as it believed this was a more accurate measure than the number of cases, which depend on testing rates.

In the Western Cape, the current death “doubling time” was eight to 10 days. The premier’s briefing heard this was low compared to several other countries such as the UK and Italy.

There was some indication the doubling time was slowing down but there were also some delays in the reporting of deaths, said the Western Cape Department of Health’s Professor Mary-Ann Davies.

Winde said everyone shared the responsibility to “slow the spread … as we’re getting closer and closer to the peak”. This was now expected as early as next week, said Winde.

Asked about the availability of dexamethasone, which has been reported to show positive results for patients either on ventilators or oxygen, Cloete confirmed the province had supplies of “injectable” forms of the drug, but not oral, and was “looking at availability”.

On alcohol-related cases in hospitals, since alcohol sales were unbanned under Level 3, Cloete announced there had been a total of “112 additional admissions at the five central hospitals we are tracking the data in”.

These cases were “competing for beds”, with Covid-19 cases.

READ | Hairdressers and restaurants: Here are all the businesses that will reopen

The province was monitoring alcohol-related trauma cases closely, and if these incidents escalated “we will have to come in with much stronger requests”, Winde warned.

He had also requested the police and City of Cape Town to focus on adequate deployment of police resources to crime hotspots and for the assistance of Covid-19 plans.

Winde praised the humanitarian response from “thousands of NGOs” which had carried by far the bulk of this responsibility.

He hoped the national relaxations on certain sectors – including tourism and personal care – would alleviate the humanitarian crisis, from new income.

Meanwhile, Cloete said the province was working closely with Afrox regarding oxygen supply.