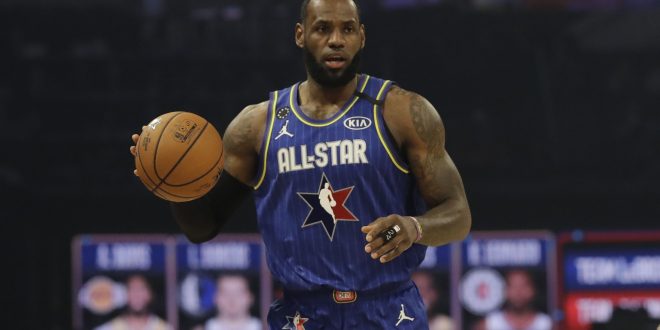 How Kobe Bryant is represented by four marquee All-Stars

LeBron James showed mercy, being fully aware of a reporter’s fumbled words but genuine intentions when she called him “Kobe” during the postgame presser Sunday night, while preparing to ask him his favorite memory of Kobe Bryant.

“I don’t mind being Kobe this weekend,” James said. “My mom might not like it, but I’m OK with it.”

James now takes Bryant’s place, albeit in such an unwilling manner, as basketball’s greatest evangelist. What better salesman was there for the game’s goodness, its perfections through struggles and the lessons it can teach? Although Bryant wasn’t as present at Laker games since his retirement, his presence was always looming. Whether it was his Mamba Sports Academy — where he was headed when he and daughter Gianna died last month — or showing up at Barclays Center last December, or his championing of women’s basketball through Gianna’s burgeoning career, he made no bones about his love for the game and his desire to push it forward.

Retired players, those who choose their exit or those who have the game make the decision for them, are in tough positions. Professional basketball moves swiftly through eras, which makes the look of it different from when players enter the league. It becomes younger and, in some players’ minds, more diluted.

So the ambassadors have to be secure with their place in the game when they leave it and embrace the generations to follow. Bryant in his later years seemed to enjoy that part as his body began to fail him, taking in the small victories. Even if James’ career path doesn’t wind down the same as Bryant’s, he’ll have to become basketball’s Yoda and gatekeeper.

Giannis Antetokounmpo getting that stamp of approval from James the way Bryant received it from Michael Jordan will be critical to not only how the Greek Freak is viewed by the fans but also in the weaving of this interconnected NBA story at large.

Bryant and James spent significant time together during the 2008 Olympic Games, when the so-called “Redeem Team” memorably took back the gold medal. Whether by accident or on purpose, they were the faces of American basketball and took their gospel everywhere.

James usually knows the right things to say, and especially most recently in his career, he has taken the appropriate tone in important moments that will be etched in history. When he retires, he’ll have to carry that same torch and tone to keep the game progressing.

Kobe’s trademark stubbornness almost got the better of him at times in Los Angeles. He was ready to leave the Lakers twice in his prime, once via free agency and the other by a 2007 trade demand that had the Detroit Pistons prepping a jersey with the No. 24 on it early in the 2007-08 season.

But Bryant and the Lakers reconciled, with Bryant getting his message across about getting better talent, and the acquisition of Pau Gasol leading to three straight finals appearances and two more titles.

Bryant took no quarter, and neither does Miami Heat star Jimmy Butler. Butler won’t be synonymous with any one franchise the way Bryant and the Lakers are, but their toughness, work ethic and expectations are the same. It takes a special kind of franchise to absorb a personality like Bryant or Butler, needing institutional knowledge and trust. Bryant was uncompromising at his best and worst, a trait Butler has in spades. Butler’s principles were too much for the Chicago Bulls, Minnesota Timberwolves and Philadelphia 76ers.

But they fit just right with the Miami Heat.

“He wants to win now,” Butler said Saturday of Heat czar Pat Riley. “You know, none of this is guaranteed. He realizes it, everybody in Miami, the organization realizes it. And we’re trying to make it happen.”

Butler is always in “go for it” mode. Either you’re going to work as hard as Butler or you’re going to get out of the way. There’s hardly any gray area with teammates or coaches, which makes him an acquired taste of sorts.

He didn’t want the Bulls to take a step back when they were transitioning, wanting them to make moves for Kyrie Irving or Kyle Lowry before they started their rebuilding process. He wanted the Timberwolves to get the best out of their young stars and the same in Philadelphia — there was no “process” in his mind, and there still isn’t.

They’ve both played through injuries that would leave others out for weeks at a time. Once in Chicago, Butler had been out with a knee strain, missing over a month in the 2015-16 season. But James Harden, the Houston Rockets and a nationally televised game on a Saturday night were on the menu.

So he threw himself out there against better judgment and tallied 24 points, 11 rebounds and six assists against the Rockets in a win — then had to miss the next three games because he overexerted himself.

Kobe Bryant didn’t have the same easy-to-process road as LeBron James, the basketball savant the world was preparing for since his sophomore year in high school. It wasn’t that Bryant was toiling away in the Philadelphia suburbs, but it was a different time in which players jumping straight from high school to the pros was seen as novelty and perhaps even foolhardy.

Kevin Garnett and Bryant were the pioneers in that sense, but their growth wasn’t preordained. They had to come in through the roof as opposed to the front door of stardom.

Giannis Antetokounmpo (No. 15 overall in 2013) was picked in a similar spot as Bryant (No. 13 overall in 1996), and although Antetokounmpo was given a cool nickname upon his arrival, no one knew what to make of the Greek Freak except for the fact that he could develop into a really good basketball player with time and effort.

The Milwaukee Bucks knew there was a chance Antetokounmpo could blossom, but they still selected a player at his position the very next draft in Jabari Parker. And it was Parker who everyone believed was the franchise savior, not the skinny foreign kid.

But Antetokounmpo had to prove to everyone who believed and especially those who didn’t that nothing was gonna get in his way. Antetokounmpo may not crave stardom in a traditional, attention-seeking sense, but his ambitions were clear with his stair-step improvement. Bryant had to outplay Eddie Jones before the Lakers were truly ready to move on from Jones, and Jones was a proven All-Star and dynamic two-way player.

Then Bryant had to show Shaquille O’Neal he was worth the same spot on the marquee and that he wasn’t a supporting character. That determination, taking it from the ground up, makes his road to stardom like Antetokounmpo’s — remarkable given their starting point.

Perhaps that was what Bryant saw in Antetokounmpo a few years ago, when the two forged a strong relationship followed by Bryant’s Twitter challenge for Antetokounmpo to win MVP — the challenge he took to heart and fulfilled last season.

“I’ve been trying to do what I’ve been doing since Day One, which is get better, be humble, help my teammates be great,” Antetokounmpo said Sunday night. “Whenever I have a chance to get out there, I just play with an edge.”

The All-Star Game’s competitiveness took a turn when Antetokounmpo picked up players full-court and his Herculean block of LeBron James’ layup late in the fourth quarter Sunday night harkened back to days when Bryant took the All-Star Game as seriously as he did the regular season.

In more ways than one, Antetokounmpo is following in Bryant’s footsteps.

Kobe Bryant seemed as much a fan of Phoenix Suns star Devin Booker as Booker was of Bryant, giving Booker his validation during his last go-round in Phoenix in 2016.

He compared Booker trying a leg-kicking fadeaway on him to himself doing the same thing with Michael Jordan during one of their matchups, impressed with Booker’s audacity. But Booker also took to Bryant’s penchant for high-scoring binges that border on unstoppable.

Booker topped 40 five times last season and crossed the 50-point mark twice. We all remember the 70-point game against Boston in 2017—the highest such mark since Bryant’s 81-point night against the Raptors in 2006.

James Harden has the 50-point games on his résumé as well, but the way he does it, with long range bombs and free throws, can leave one with an empty feeling. Bryant had a complete offensive arsenal, and an ability to demoralize an opponent by making impossible shots over good-to-great defense. Booker, like Bryant, is lethal from anywhere on the floor and his handle allows him to create requisite space to make up for his lack of otherworldly athleticism. Bryant, although compared to Jordan in terms of style, wasn’t the athlete Jordan was. He made up for it with supreme footwork and an insatiable will to take any shot, anywhere on the floor. Booker even surprised new head coach Monty Williams with his footwork and positioning. Booker came into the league as the NBA’s youngest player, like Bryant, and was also in desperate need of a mustache on draft night — like Bryant as well.

Previous Coronavirus Updates: Scramble to Track Cruise Passengers After Infection Is Reported
Next The PS5 Could Be Sony’s Last Gaming Console, Ever