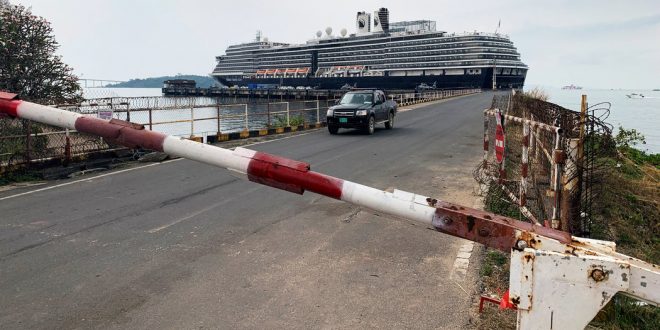 Fourteen Americans who were evacuated from a cruise ship in Japan on Monday were placed in segregated areas of a chartered flight after they were found to have the new coronavirus shortly before boarding the plane to the United States, American officials said.

The passengers were among more than 300 Americans aboard a cruise ship that was been quarantined in Yokohama for more than 10 days. United States officials initially said they would not allow infected people to board the evacuation flights, but appeared to reverse that decision early Monday.

“During the evacuation process, after passengers had disembarked the ship and initiated transport to the airport, U.S. officials received notice that 14 passengers, who had been tested 2-3 days earlier, had tested positive for COVID-19,” the State Department and Department of Health and Human Services said in a joint statement, referring to the disease caused by the new coronavirus.

The 14 infected passengers were moved into a specialized containment area on the evacuation aircraft, where they were to be isolated and monitored. They had been found to be asymptomatic and “fit to fly” before the evacuation, according to the statement.

At least one flight landed on Monday morning at Travis Air Force Base in Fairfield, Calif. All passengers on that flight will undergo a 14-day quarantine. Those that develop symptoms or test positive will be sent to “an appropriate location for continued isolation and care,” the statement added.

The United States has 15 confirmed cases of the new coronavirus. That number will nearly double when the 14 infected passengers arrive.

Number of new cases in China hits a three-week low.

The number of new coronavirus cases dropped to a three-week low, according to official data released on Monday. Experts said the dip was largely because of the lockdown measures the Chinese government has imposed on several cities to keep the spread of the virus at bay.

On Monday, the government of China reported 2,048 new infections — one-fifth the number of cases from a week ago — and 105 new deaths over the previous 24 hours. The number of new coronavirus cases reported in China had started to level off around Feb. 6, suggesting that the outbreak might be slowing. But last Thursday, officials added more than 14,840 new cases to the tally of the infected in Hubei Province, the center of the outbreak, after it changed the criteria for diagnosing patients.

The trend suggests that the epidemic that once seemed hopelessly out of control a few weeks ago could be contained — at least, for now.

“The measures taken have been extraordinary and we are seeing the effects,” said Raina MacIntyre, the head of biosecurity research at the Kirby Institute at the University of New South Wales.

China has sealed off several cities, threatened quarantine violators with stiff punishments and rounded up sick people in mass quarantine centers in Wuhan.

But public health experts caution that the worst is not over.

Some experts view the figures reported by China with some skepticism. The government has a history of covering up data that makes it look bad and has an incentive to underreport the figures.

Public health experts say the coronavirus is also extremely contagious, more so than the virus that caused the SARS outbreak of 2002-2003, and may be more difficult to curtail.

China to delay the annual meeting of its national legislature.

China signaled on Monday that it would postpone the annual session of its Communist Party-dominated legislature because of the coronavirus epidemic, a symbolic blow to a government that typically runs with regimented discipline.

The annual full meeting of the legislature, called the National People’s Congress, is a major event in China’s political cycle, when President Xi Jinping, Premier Li Keqiang and other leaders lay out their agenda for the year, issue the annual budget and pass major legislation.

Each March, with clockwork regularity, nearly 3,000 delegates gather in the grandiose Great Hall of the People next to Tiananmen Square in Beijing.

But delay is now virtually certain, judging from an announcement from the National People’s Congress Standing Committee, which oversees the legislature. The announcement said that the committee will consider delaying the congress.

That makes postponement a near certainty. The National People’s Congress is dominated by Communist Party politicians, and it would be extremely unlikely that the proposal would be up for formal approval unless Mr. Xi had agreed it was necessary.

A postponement would be the first time in recent memory that the annual legislative session has been delayed. Even in 2003, when China was battling the severe acute respiratory syndrome, or SARS, epidemic, the congress went ahead as usual.

The terse wording of the announcement gave no clue when the congress would convene.

Delaying the congress is unlikely to seriously derail Chinese policymaking, which is controlled by a small circle of party leaders.

Countries race to track cruise passengers after the coronavirus is discovered.

The cruise ship had been shunned at port after port for fear it might carry the new coronavirus, which causes the disease COVID-19, but when the Westerdam arrived in Cambodia on Thursday, the country’s prime minister greeted its passengers with flowers.

Amid assurances that the ship was free of the virus, hundreds of elated passengers disembarked, traveling to destinations around the world.

One, however, did not make it much farther than the thermal scanners at the airport in Kuala Lumpur, Malaysia. The passenger, an American, was stopped on Saturday, and later tested positive for the coronavirus.

With passengers already headed for destinations on at least three continents, health officials are scrambling to determine how a big a problem they now have — and how to stop it from getting bigger.

With more than a thousand passengers from the Westerdam headed for home, experts said, it may be harder than ever to keep the coronavirus outbreak contained to China.

It is unclear how well the passengers were screened before they were allowed off the ship. But the best approach to containing a broader spread of the virus from the Westerdam would be to track down all of the passengers and quarantine them for two weeks, experts said.

A heist at knife point and a manhunt in Hong Kong, all over toilet paper.

Three masked robbers appeared at dawn on Monday outside a Hong Kong supermarket. There, they held a deliveryman at knife point and made off with over a hundred dollars worth of one of the most sought after commodities in this city of seven million people: toilet paper.

Toilet paper has been sold out across the city for weeks after a run on the product was prompted by rumors that manufacturers in mainland China would cease production or that the border would be sealed as a result of the coronavirus outbreak.

Retailers have dispelled the rumor, saying there is no genuine shortage. But bulk packs of toilet paper are snatched off supermarket shelves almost as soon as they are restocked and city blocks are crowded with residents lined up at shops just to buy the product.

So short is the supply that lovers exchanged individual rolls on Valentine’s Day as a sort of pragmatic joke. Online, users have offered to barter surgical masks, which actually are in short supply, for a few rolls of toilet paper. And one hoarder was shamed on social media when neighbors spotted an apartment whose windows were crowded by a wall of toilet paper rolls.

The toilet paper stolen in Monday’s heist was later discovered stashed at a hotel, local news outlets reported, but the perpetrators remain at large. The police said two people had been arrested in connection to the heist, but they were looking for others.

Last week, the police arrested a man charged with stealing eight boxes of heavy-duty face masks, known as N-95 masks, from a parked car after smashing its windows.

China Inc. is slow to reopen its doors.

Travel restrictions and quarantines imposed in response to the coronavirus epidemic in China have produced a severe shortage of workers that has blocked many factories from returning to full production, an American business group said on Monday afternoon.

A questionnaire late last week by the American Chamber of Commerce in Shanghai that attracted responses from 109 manufacturers in or near the city in east-central China found that nearly four-fifths of them did not have enough staff to run their production lines at full capacity.

“We’ve got more and more factories getting open, but across the board, everybody is still struggling to find workers,” said Ker Gibbs, the president of the chamber. He cited 14-day quarantines that many cities impose on new arrivals or returnees from other towns and cities.

Almost two-fifths of the companies said they had trouble finding enough face masks to meet local requirements that factories needed to provide them to their workers.

Two-thirds of the companies that chose to respond to the questionnaire had already opened operations by the end of last week, while another fifth of the companies were planning to reopen this week.

The questionnaire had been sent to 612 members of the chamber, for a response rate of 18 percent.

Senator Tom Cotton, Republican of Arkansas, has repeated an unsubstantiated conspiracy theory that has spread from small-town China to the right-wing news media in the United States: The new coronavirus originated in a high-security biochemical lab in Wuhan.

In a television interview on Fox News on Sunday, Mr. Cotton suggested that a dearth of information about the origins of the virus raised more questions than answers.

“We don’t know where it originated, and we have to get to the bottom of that,” Mr. Cotton said on the program Sunday Morning Futures. He then raised the possibility that the virus originated in a “biosafety level-4 super laboratory.” Such laboratories are used for research into potentially deadly infectious diseases.

“Now, we don’t have evidence that this disease originated there but because of China’s duplicity and dishonesty from the beginning we need to at least ask the question to see what the evidence says, and China right now is not giving evidence on that question at all,” he added.

The Chinese authorities say the outbreak began in a market in Wuhan where wild animals were sold. The city is also home to a biochemical laboratory.

After receiving criticism for lending credence to what has been largely considered a fringe theory, the senator took to Twitter to say he did not necessarily think the virus was an “engineered bioweapon.”

That idea, he said, was just one of several hypotheses that included the possibility that the outbreak was a “deliberate release.”

He also said it was possible that the virus spread naturally, “but almost certainly not from the Wuhan food market.”