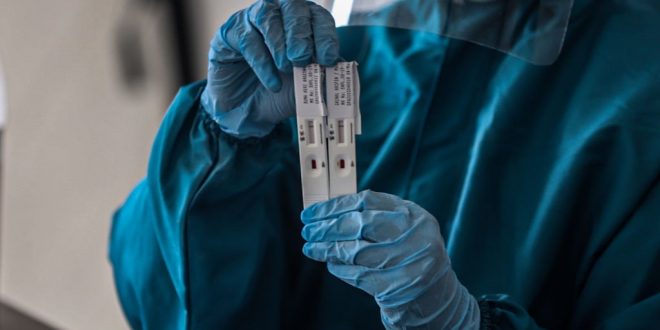 As an expected spike in Covid-19 cases looms, South African laboratories are facing a critical shortage of test kits and reagents needed to conduct coronavirus testing.

In the past two days, National Health Laboratory Service (NHLS) labs around the country managed to complete only 8 540 tests – compared to 13 896 tests done by private labs.

But both public and private sectors are showing a sharp decline in the number of tests conducted.

“As a country, we are now facing a challenge with the global shortage of testing reagents. We understand it’s becoming a challenge to many other countries,” Health Minister Zweli Mkhize said in his daily Covid-19 press release on Tuesday.

The shortages Mkhize referenced are clearly visible when reported testing data reported in by the Department of Health. A representation of daily testing data as reported by the Department of Health between 4 and 26 May for public labs, which shows sharp declines on 25 and 26 May. Graphic – Rudi Louw A representation of daily testing data as reported by the department of health between 4 and 26 May for private labs, which shows a decline on 25 and 26 May. Graphic – Rudi Louw

In a report on testing published by the National Institute for Communicable Diseases (NICD), containing testing analysis for the week of 11 to 17 May 2020, testing had increased significantly since early March, but in the past two weeks under review (4-17 May), testing had declined – particularly for the week ending 17 May.

This was likely to due to shortages of testing kits and backlogs in labs.

A rolling seven-day average graphic of the number of tests done across public and private sectors, shows the decline after a long and sustained increase. According to Health24, the report showed that laboratory delays, indicated by an increase in the number of days between the date the test is done and the specimen collected, and the reporting of the result, were more than six days for public labs. Professor Glenda Davison, head of the biomedical sciences department at the Cape Peninsula University of Technology, told Health24 that test kit availability would definitely be a reason for a decrease in testing.

“The test kits are acquired from a number of international companies and are most often imported which could result in delays. The reason being that countries throughout the world are doing these tests and the supply just can’t keep up with the demand.”

Davison highlighted that the NHLS was locked into using test kits from specific manufacturers, such as Cepheid in the US – the company that manufactures the GeneXpert machines and test kits.

News24 previously reported that the US State Department had denied claims made by Mkhize in Parliament on 27 April that the US was restricting exports of the GeneXpert test kits.

“The GeneXpert kits are actually produced in the US. Since the US has put a restriction on the stuff being exported… the other company is operating out of Sweden and they have got some challenges which they have reported to us.

“We are hoping that they will get over those challenges … they have promised that they will be increasing their supply to us. We are aware the whole continent is looking for the same kits, so there is going to be quite a challenge,” said Mkhize.

While the NHLS uses other machines as well, such as Cobas models made by Roche, the GeneXpert machines are a crucial part of its plans to ramp up testing capacity – which has been hampered by a shortage of kits from the start.

The GeneXperts are also fitted to mobile testing units procured by the NHLS, to be used in far-flung areas with no laboratory nearby.

The NHLS, responding to a query from News24, said it was experiencing challenges regarding extraction and test kits in that ordered supplied could not be delivered due to logistical challenges that were “outside the NHLS’ control”.