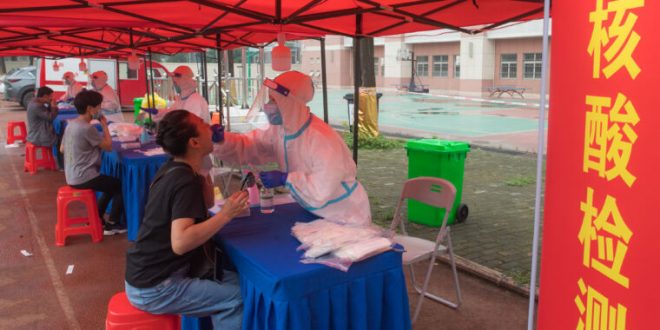 Proponents of the impressive effort say it will provide peace of mind.

When Chinese officials in the city of Wuhan discovered a cluster of just six COVID-19 cases around two weeks ago—the first cases there in more than a month—they quickly set an ambitious plan to test the entire city of roughly 11 million and crush a potential second wave of infection. And they initially planned to try to do it in just 10 days.

Ten days out, they nearly met that goal. Wuhan Municipal Health Commission swabbed more than 9 million residents and tested more than 6.5 million of those swabs for coronavirus genetic material between May 15 and May 24, according to state media.

Laboratories in the city went from conducting 46,000 tests a day to as many as 1.47 million in the screening sprint, according to The New York Times. The Times notes that in the US, New York tested 1.7 million people since March 4, a nearly three-month time frame, according to The Atlantic’s COVID Tracking Project.

Wuhan officials pulled off the mass screening in a staggered neighborhood-by-neighborhood sweep. Then they sped up swab processing by running tests in batches. That is, they combined material from five to ten swabs and tested the pooled sample all at once. If any of the pooled swabs were positive for the novel coronavirus, SARS-CoV-2, officials could go back to that handful of people and retest them. This type of batched testing works well to quickly go through a population when cases are rare.

So far, the testing campaign has identified 218 asymptomatic cases, Wuhan officials reported. Those cases are now in quarantine.

Now, with the bulk of the testing complete, city officials are working to “check the leaks and fill the gaps” to make sure no residents are missed.

Some residents have told the Times they opposed the testing campaign because it forced them to have more contact with others, potentially putting them at risk of an infection. However, others argued that the testing offered psychological benefits as people head back to work.

“This push to test everyone would improve the vitality of the city and provide a scientific basis for the resumption of work,” Yang Zhanqiu, a virologist at Wuhan University, told the Times. “It can also make people feel at ease and give everyone some peace of mind.”

Previous Chris Cuomo on his coronavirus recovery: It freaks me out a little
Next INFOGRAPHICS | Sharp drop in Covid-19 testing due to test kit, reagent shortage