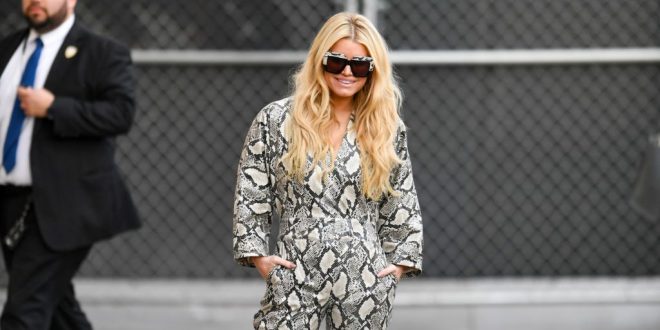 Justin Timberlake hasn’t received the best press as of late and Jessica Simpson just added to that. After he was caught on camera holding hands with his film co-star, rumors began swirling that he was cheating on his wife, Jessica Biel. Though Timberlake denied claims and insisted that nothing happened, he did issue a public apology to his wife for the embarrassment that he caused her. However, even after his apology, some of Biel’s fans weren’t too keen on forgiving him. Now, another story about Timberlake has surfaced involving Simpson, which certainly doesn’t paint the “Can’t Stop The Feeling” singer in the best light.

Simpson recently was a guest on the popular late-night show, Jimmy Kimmel Live! to promote her new tell-all book, Open Book. Whilst there, she mentioned that she and Timberlake kept in touch over the years even after she didn’t make the Mickey Mouse Club. She then went into detail about a seemingly awkward moment they shared. After [my] divorce [from Nick Lachey] and he was out of a relationship, he was, like, over at my house, we shared a nostalgic kiss, but I thought, ‘Oh, this is interesting,’” Simpson began about the experience.

Simpson and Justin Timberlake kissed after she divorced from her husband

However, things quickly got awkward when Timberlake broke away and immediately started texting. “And he took his phone out and started typing. And I was like, ‘Okay, I hope that’s not, like, another girl. Like, did I, like, stick my tongue out too much or, you know?’” Simpson recounted. But Timberlake wasn’t texting another girl, in fact he was texting his former Mickey Mouse Club cast member, Ryan Gosling, who also knew Simpson from when she auditioned for the aforementioned show.

A bet with Ryan Gosling

“But apparently him and Ryan Gosling had a bet on who would kiss me first when they were 12-years-old. And so, he texted Ryan and said he won the bet. And I was like, ‘Oh, okay. Um…So we don’t kiss again. That’s done,” Simpson confessed about the incredibly awkward situation. But, even though Timberlake won said bet, Simpson declared that when she was a kid she was always more drawn to Gosling.

“Ryan was the one that I was, like…when I was 12, I was, like, ‘This guy is so cool and he’s from Canada. I don’t know where that is on the map, but I really think that that’s amazing.’ And there was something so cute about him. But Justin won the bet,” the “A Public Affair” singer shared. Though Simpson herself seems to have moved past the awkward kiss, many fans were disgusted by Timberlake’s actions. They weren’t too upset about Timberlake and Gosling making stupid bets when they were kids, but Timberlake remembering it and going out of his way to text Gosling immediately after kissing Simpson seemed like a gross move to them.

People are outraged by what the interview revealed

“Every time I hear about him he’s being a piece of sh*t,” one person commented. “He held onto a stupid bet for 13 years? Justin Timberlake is such an a*s,” another declared. “I’m glad people are seeing Timberlake for the absolute as*hole and trash he’s always been,” one critic declared. “Everything I learn about him makes him more insufferable,” another person chimed in. Others cited Timberlake’s past behavior to show that he made a similar faux pas in the past.

“Justin also told Rolling Stone magazine he took Britney’s virginity when she was 15 so there’s that. He’s the definition of gross,” one person added, speaking of his past relationship with Britney Spears. We can certainly see why people are offended by Simpson’s story. Here’s hoping Timberlake has learned and matured in the years since this happened.