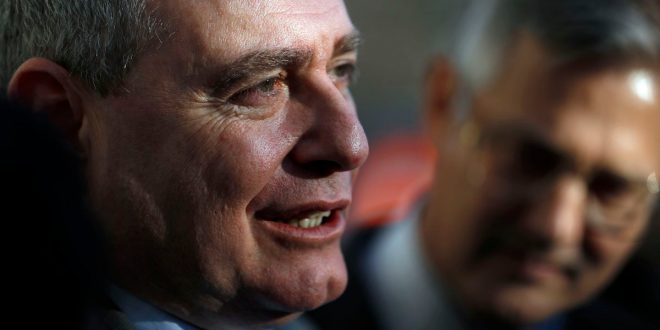 Ten days before Lev Parnas and Igor Fruman dined with President Trump at his Washington hotel, they were part of a small group of Republican Party donors who met with the president at Mar-a-Lago, his Florida estate, a new recording shows.

The two men — who later assisted Rudolph W. Giuliani’s efforts in Ukraine — were part of a gathering held in an ornate room of the property and also attended by Republican National Committee Chairwoman Ronna McDaniel, according to the video and people in attendance.

While it was known that Fruman and Parnas had attended an event at Mar-a-Lago, the focus of the event, the timing and who else was in attendance had not been made public.

The April 2018 meeting came days before the two men took part in a donor dinner with the president at his Washington hotel, an encounter captured on a video released last week by Parnas’s attorney.

During that dinner, Parnas told the president that the U.S. ambassador to Ukraine was agitating against him, prompting Trump to abruptly call for her firing.

The recordings of the two events undercut Trump’s repeated assertions that he does not know Parnas and Fruman, who were arrested in October on campaign finance charges. “I don’t know those gentlemen,” Trump said at the time. Last week, the president referred to Parnas as “a con man” and a “groupie.”

Taken together, the two recordings provide a window into Trump’s close interactions with high-dollar donors, despite his pledge to “drain the swamp.”

The White House did not immediately respond to a request for comment.

“On a given day, the Chairwoman greets hundreds if not thousands of people at events across the country,” RNC spokesman Michael Ahrens said in a statement. “This is nothing more than that.”

He declined to answer additional questions regarding the event, including about the guests in attendance.

In an interview, Parnas said the back-to-back events he attended with Trump shows the proximity they had to the president.

“When Trump would see us, he would call us ‘my boys,’ ” he said. “Me and Igor together? It’s not something you’d forget, particularly in that scene.”

Giuliani — who began working with Fruman and Parnas later that year — was not present at either gathering, people familiar with the meetings said.

Parnas had donated $50,000 to a joint fundraising committee for Trump’s campaign and the RNC in October 2016, campaign finance records show.

Parnas’s attorney, Joseph A. Bondy, provided the recording of the Mar-a-Lago gathering to The Washington Post. He said he had previously given a copy to House impeachment investigators.

Parnas and Fruman say little in the recording, but Parnas can be seen acting as a photographer for the group, snapping photos of other attendees on their cellphones before posing for a picture with Trump.

McDaniel — whose nameplate can be seen directly across from where Fruman is seated — can be heard giving a presentation on polling and the 2018 midterms.

Also in attendance: then-Rep. Pete Sessions (R-Tex.) — who has been subpoenaed as part of the ongoing criminal investigation involving Parnas and Fruman — and Brian Ballard, a Florida lobbyist who is close with Trump.

In the recording, which lasts about 37 minutes, Trump talks about his poll numbers and asks Sessions and McDaniel to provide the group with an update on Republican efforts to win the 2018 midterm elections. Sessions had previously been head of the National Republican Congressional Committee.

“Mr. President, thank you very much,” Sessions says. “We win when we are together. We win when we gather ourselves together around a common theme — that is, a president of the United States that wants to make America great again. It’s the common denominator for every single member of Congress.”

McDaniel gives the group a pep talk about the upcoming elections, saying that Democrats are energized but that Republicans are excited with Trump’s leadership.

“We must win. And we can win,” she says of the election, in which Democrats ultimately took control of the House.

At one point, the group talks about Syrian policy with the president, with an unidentified attendee criticizing President Barack Obama’s actions in the country.

A woman who identifies herself as a Syrian American from New Jersey lavishes praise on Trump, telling him, “Syrian Americans love you.”

In response, Trump attacks the Obama administration’s policy on Syria. “Obama, he didn’t go over the red line,” Trump says. “That was a disaster. You know, Obama gave Syria up two or three years ago.”

At the end of the meeting, a donor from St. Petersburg, Fla., named Bill Edwards tells the president he spent years in the mortgage business giving loans to military veterans and complains about a provision in legislation to revise the Dodd-Frank Act.

Edwards appears to be referring to a measure introduced by Sens. Elizabeth Warren (D-Mass.) and Thom Tillis (R-N.C.) that Warren said at the time was designed to eliminate a practice known as churning, in which home loans are repeatedly refinanced to generate fees for lenders.

In the recording, Edwards tells Trump that part of the legislation would eliminate what he describes as a streamlined program to allow veterans to lower their interest rates on mortgages through refinancing without having to go through appraisals and surveys.

“It’s the most effective program on the planet,” Edwards says.

“Where’s the problem? In the Senate or the House?” Trump asks.

Trump and Sessions say they are unaware of the provision.

“Mr. President, you’ve learned how this works,” Sessions says. “If you get a document from the Senate and it passes, the Democrats got something in there that was bad. So I need to look at that, and I will.”

Edwards told The Post on Thursday that he raised the legislation with Trump as a retired Marine and an advocate for veterans. He said he is no longer a mortgage lender, so he had nothing to gain by advocating against the provision, which ended up being incorporated into law in late 2018.

“I wanted to make sure that everyone was aware that veterans were going to take a beating on this,” Edwards said.

Edwards had been the owner of Mortgage Investors Corp., which at one point was the largest refinancer of Department of Veterans Affairs loans, according to the Tampa Bay Business Journal. His company closed its doors in 2013, citing an inability to comply with requirements in the Dodd-Frank Act.

The same year, his company agreed to a $7.5 million penalty from the Federal Trade Commission, described at the time as the largest fine ever enacted under the “Do Not Call” telemarketing rule. The FTC complaint said Edwards’s company called more than 5.4 million numbers on the “Do Not Call” list to offer mortgage refinancing to members of the military and veterans in violation of the rule.

Lesli Esposito, an attorney representing the company, told the Tampa Tribune at the time that the company was not admitting to any of the allegations but “simply made the business decision to resolve the matter, so they can move forward with business and helping veterans.”

Previous Jessica Simpson Revealed Justin Timberlake Kissed Her to Win a Bet with Ryan Gosling
Next Congress Votes ‘No War Against Iran,’ In Rebuke To Trump