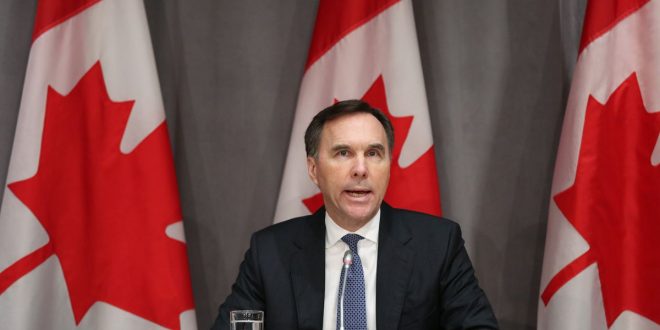 Ottawa won’t be much worse off fiscally, even with record borrowing

The federal government is aiming to take full – and lasting – advantage of rock-bottom interest rates as it borrows record amounts to fund its COVID-19-driven spending.

Finance Minister Bill Morneau pointed to two benefits as he delivered a limited fiscal update on Wednesday. First, Ottawa’s debt servicing charges for the current 2020-21 fiscal year will drop $4.3-billion from the level projected in December, 2019, despite $469.3-billion of new borrowing, a result of falling interest rates on short- and long-term bonds.

Second, the government is looking to lock in those benefits by nearly doubling the proportion of its borrowing that comes from long-term debt. Longer terms mean Ottawa will continue to enjoy savings even when the economy begins to recover and puts upward pressure on interest rates.

“We’re thinking about the duration of our debt, to protect ourselves from what they call rollover risk. ” Mr. Morneau told reporters on Wednesday.

On both counts, the government is correct in what it is saying – but is also omitting several unpleasant realities from the picture. It is indeed projecting lower total interest payments, at $19.5-billion for the 2020-21 fiscal year, down from December’s projection of $23.7-billion.

But Mr. Morneau is only looking at the benefits to the federal government from lower interest rates. On the other side of the ledger are the government’s obligations to federal civil servants for pensions and other benefits, unfunded liabilities that stretch over decades and are highly sensitive to long-term interest rates.

As interest rates fall, so, too, does the discount rate used for calculating pension liabilities. (The lower the discount rate used, the greater the present value of future obligations; in essence, it’s a compound-interest calculation in reverse.) The cost of those obligations is now projected to be $5-billion more than before, more than wiping out the debt service savings from lower interest rates.

Even with that caveat, Ottawa will be not much worse off, even though it is borrowing a record amount this year, equivalent to nearly three-quarters of the entire national debt before the novel coronavirus hit.

The total of $469.3-billion in new debt is higher than the stated deficit largely because it includes $139.3-billion in loans, investments and advances to Canada Mortgage and Housing Corp. (CMHC) and other Crown corporations for COVID-19-related assistance programs, as well as the loans issued by the government under the Canada Emergency Business Account.

Philip Cross, former chief economist with Statistics Canada, warned that ultralow interest rates are not really a cause for celebration in Ottawa, since they are simply a reflection of an extremely weak economy. “If it lasts, you’ll be borrowing for a very long time,” he said.

In flagging “rollover risk,” Mr. Morneau clearly has that prospect in mind and is pushing a greater share of the federal government’s new debt into longer-term bonds. Taken together, 10-year and 30-year bonds are projected to account for 26 per cent of debt sold this year, or $108-billion, nearly double the proportion of that debt issued in 2019-20, at 14 per cent, or $17-billion.

“Good for them, they’re managing the debt well,” said Alexandre Laurin, director of research at the C.D. Howe Institute.

But this is a shift only in emphasis in the government’s borrowing, since it is significantly increasing shorter-term debt as well.

Ottawa says it will issue $150-billion in two-year bonds, nearly triple the $53-billion it issued for 2019-20. The amount of three-year bonds will also skyrocket, to $65-billion from $19-billion. Issuance of five-year bonds is to rise to $88-billion from $33-billion.

Treasury bills, which have terms of a year or less, are projected to jump to $294-billion from $152-billion.

All of that debt is more vulnerable to the possibility of rising interest rates as it is rolled over – the very risk that Mr. Morneau is seeking to avoid.

Beyond the interest burden, Mr. Morneau faces the added complication of ensuring that massive federal borrowing does not disrupt bond markets. One long-standing concern about large and lasting deficits is that Ottawa may simply crowd out borrowing by the provinces and the private sector.

The Bank of Canada has already taken steps to increase and maintain the liquidity of financial markets during the coronavirus crisis, with regular purchases of government bonds and corporate debt. The federal government has also relaxed some of the rules around its securities auctions to make participation more attractive for dealers.

But the fiscal update clearly signals Ottawa is not simply assuming the market will buy whatever it wishes to sell – particularly long-term bonds – saying the government will be consulting with market participants in the next few months to gauge buyers’ appetites for long-term debt. The government will adjust its plans “to maintain stability in Canada’s fixed-income markets in these evolving circumstances, taking into account the requirements of other issuers, such as provinces, municipalities and corporations,” the update said.

Mr. Laurin said there is a question of how enthusiastic investors will be to lock into debt with negative real interest rates, which loses value after accounting for inflation. “It’s unprecedented territory, so they’re being cautious,” he said.

A significant part of the government’s borrowing is on behalf of Crown corporations and other entities, which would tend to blunt any crowding-out effect. The government plans to borrow $40.8-billion that will then be issued as loans to the private sector under the Canada Emergency Business Account.

Another $47.6-billion will be borrowed so that the Business Development Bank of Canada and Export Development Canada, Farm Credit Canada and the Canada Development Investment Corp. can deploy those funds in the private sector. The government’s borrowing also includes $50.8-billion for the CMHC to use in purchasing mortgage securities.