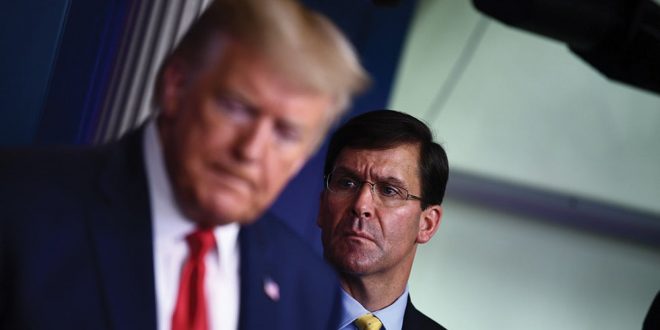 The Pentagon is actively planning on living with the coronavirus well into 2021, putting it at risk of angering President Trump

Donald John TrumpTrump retweets personal attacks on Clinton, Pelosi, Abrams Biden swipes at Trump: ‘Presidency is about a lot more than tweeting from your golf cart’ GOP sues California over Newsom’s vote-by-mail order MORE as he expresses confidence that the disease is on the wane.

Defense officials have extended a freeze on troop movement, held ships in port and laid the framework for what the military will look like in an extended pause because of the COVID-19 pandemic. On Tuesday, a leaked Pentagon memo revealed that top Defense Department (DOD) officials are planning for the possibility that the military could be dealing with the virus beyond this year.

The extended preparation cuts against White House messaging that the virus will recede in the coming months and that a vaccine could be available by the end of the year.

“There is a disconnect,” said Mackenzie Eaglen, a former congressional adviser on defense now with the conservative American Enterprise Institute. “At the same time, if anyone can take safe cover behind ‘we’re the department of planning for all contingencies,’ they can because that is what they’re supposed to do, over-plan and over-prepare.”

The situation is emblematic of the tough position the Pentagon has often been in during Trump’s presidency. Defense officials have frequently had to ensure they outwardly appear in line with the president’s wishes, while quietly navigate realities that might draw the president’s ire. It’s a phenomenon that has played out in everything from determining how to carry out Trump’s directive to remove troops from Syria, to implementing the president’s sudden edict to ban transgender service members, to offering options to respond to Iranian provocation.

With the coronavirus, the Pentagon has been charting its own course for months.

In late January, when only six people in the United States had been diagnosed with the illness and Trump was insisting the virus was under control, the Pentagon was releasing its first coronavirus-related guidance to its service members and personnel.

At the end of February, as the president claimed coronavirus would “disappear,” the Pentagon had already canceled several military exercises, restricted movement overseas and ordered all ships that had visited Pacific countries to self-quarantine.

In April, as Trump mused about reopening the country’s economy by Easter, Defense Secretary Mark Esper

And even as the Pentagon chief earlier this month declared that the administration aimed to deliver millions of doses of a coronavirus vaccine by the end of the year, the leaked draft DOD guidance warned of the “real possibility” that an effective vaccine won’t be available until “at least the summer of 2021.”

That unpublished outline, revealed last week, was likely held due to language that put it at odds with White House messaging, a former Pentagon official told The Hill.

But toeing the line between White House messaging and DOD action has opened Esper up to critics who have accused him of acting slowly and punting decisions during the pandemic, putting service members at risk.

Elizabeth WarrenWarren to host high-dollar fundraiser for Biden It’s as if a Trump operative infiltrated the Democratic primary process Hillicon Valley: Lawmakers demand answers on Chinese COVID hacks | Biden re-ups criticism of Amazon | House Dem bill seeks to limit microtargeting MORE (D-Mass.) sent a letter to Esper — signed by nine of her Democratic senate colleagues — in which they expressed “grave concern” about how the Pentagon has handled the crisis.

The eight-page letter cited several examples, including the outbreak aboard the USS Theodore Roosevelt aircraft carrier and Esper pushing decisions on implementing social distancing and other guidance to local commanders.

“Civilian leadership of the department has failed to act sufficiently quickly, and has often prioritized readiness at the expense of the health of servicemembers and their families,” the senators wrote. “This failure has adversely affected morale, and, despite the department’s best intentions, undermined readiness.”

Esper and other officials have repeatedly defended their response, asserting their top priority is the health and safety of their personnel.

Asked about the leaked memo during a Friday appearance on the “Today” show, Esper said the department “is looking at a variety of futures.”

“A second wave is a possibility. I don’t think the coronavirus is going away anytime soon, at least not until we have a vaccine or a cure,” Esper allowed.

The document may still see the light of day, albeit with editing, Eaglen said.

“I do see the possibility that those words about the vaccine are probably going to be left out of the official guidance,” she said.

“Esper took a lot of flack for letting individual commanders decide for themselves the best coronavirus responses. I think this is an attempt to put out more uniform guidance for planning and avoid that the next time around.”

Previous Varadkar followed guidelines in park
Next In a low-interest-rate world, high-interest savings proving a big winner for smaller banks