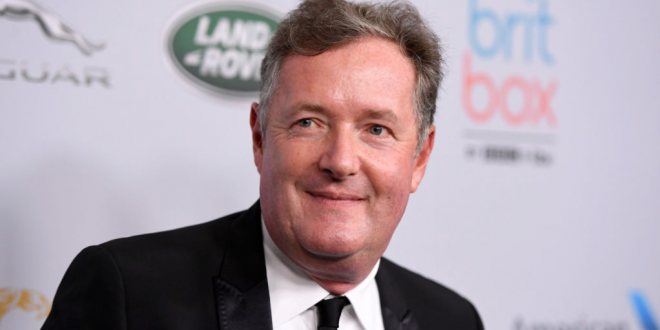 Reactions to the Super Bowl halftime show were a mixed bag, but many fans and celebrities gave the performances by Jennifer Lopez and Shakira glowing reviews. Lady Gaga – who urged them not to lip-sync prior to the show – showered the women with compliments afterward. Olivia Munn, Ryan Seacrest, Leslie Jones, the Kardashians, and Keith Urban also praised the show. Do you know who didn’t like it? Piers Morgan was not a fan.

To express his utter disagreement with what he saw, Morgan let his words do the talking in a column for Daily Mail. First, he compliments Lopez on her work in Hustlers and he points out that the film is rated “R” for nudity and sexuality. Then he compared her Super Bowl performance to her role in the movie:

“Yet J-Lo basically reprised her Ramona role at the Super Bowl, hurling herself around a giant pole in a skimpy silver flesh coloured outfit, having stripped off a studded black leather costume, and repeatedly flashed her crotch to the cameras (She was also joined by Colombian rapper J Balvin who gyrated into her from behind as he sang about booties.”

Morgan also calls some of Shakira’s dance moves a problem because she “belly-danced and tied herself up in what looked like bondage ropes.” He then said he felt like the show was a butt competition.

What was Morgan’s
main issue?

He goes on to say that the show was wholly inappropriate since millions of children were probably watching and the halftime show is supposed to be family-friendly. Morgan said the crotch shots, skimpy outfits, and stripper poles were better reserved for Las Vegas.

Additionally, he adds that it didn’t unite Americans, but rather:

“America, already a very fractured country, hasn’t been brought together in celebration, joy, love, unity and happiness by what it saw.

No, America’s been split in two between those who loved the show, and those who hated it because they thought it totally inappropriate for a massive TV audience including millions of children.”

Morgan
also cites tweets
from Dee Snider and Twitter users who didn’t appreciate J.Lo and Shakira’s attire,
props, or moves. He mentioned that some viewers found it hypocritical for the
NFL to allow such a presentation when they have a campaign going against sexual
trafficking and exploitation.

But Morgan really did enjoy the show

While Morgan spread his jabs out in the piece, he also took time to play the other side of the fence and said he thinks the show was electrifying and great. He too finds both Shakira and Lopez to be spectacularly talented women, but Morgan called the performance adult entertainment that’s not meant for kids or awkward conversations between parents and children.

He said that as an adult man, he’s “unlikely
to be overly perturbed by the spectacle of scantily clad women aged 50 and 43
wrapping themselves around poles and gyrating their crotches in front of the
cameras.”

Morgan questioned the NFL halftime show’s push for feminism,
something he’s done before with artists such as Ariana Grande and Little Mix.
While they feuded with him about his views on women’s bodies, J.Lo and Shakira
have not commented on his criticism.