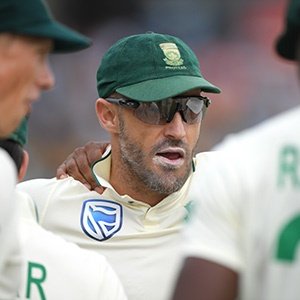 Despite reliable data pointing to a sizeable increase in South Africans’ consumption of news during the Covid-19 pandemic, Faf du Plessis is one of those shying away from the generally gloomy daily coverage on the crisis.

“Sportsmen are no different to anyone else. We go through the whole range of emotions,” the Proteas stalwart said via an audio clip released by Cricket South Africa.

“For me, it’s about remaining positive. It’s something I feel is very important and I’m putting a lot of energy into it as well.

“As a result, I’m trying to not read too many negative pieces and generally limit the news I consume. There’s a lot of panic out there. We as players experience a lot of anxiety too, there’s a fear of the future because we don’t know when we’ll be playing again.”

Du Plessis managed to procure some gym equipment for use at home a day before lockdown commenced, meaning he shares the challenges of his compatriots across all sporting codes in trying to keep a relatively monotonous fitness regime fresh.

However, Du Plessis’ charity work –  much like Springbok captain Siya Kolisi and wife Rachel through his foundation – is something that has assisted greatly in keeping him away from reading the headlines.

“We’re going through some real tough times as a country at the moment. I’ve been feeling a real sense of gratitude in this time,” he said.

“I’m grateful for what I have and there’s been a huge movement in my heart for people who don’t have it.”

Looking to more get actively involved in a project, Du Plessis received a message via social media from an acquaintance.

“He asked me if I could help to feed a small town of 174 families for a month. There’s hardly been any income to speak of there. We worked out that it would cost about R17 000, which we thought was a realistic goal.

“We wanted to show people we’re real, we just want to help. We were amazed with the generosity and raised that money within a day-and-a-half. At one stage, we had a surplus of R25 000.”

Through KFC, Du Plessis and co managed to buy essentials at wholesale rates at Makro and got it delivered to the community, which was being torn apart by rioting.

The surplus has now been utilised for a feeding scheme providing nutrition to 1 500 children.

Du Plessis and Kolisi are good friends and are now planning to align their charitable activities.

“We’ve had good conversations. We have similar hearts. We’re going to do some stuff together real soon.”

Previous Uber subsidiary Careem to slash workforce by 31%, suspends bus transport app
Next When it comes to coronavirus testing, not all tests are created equal