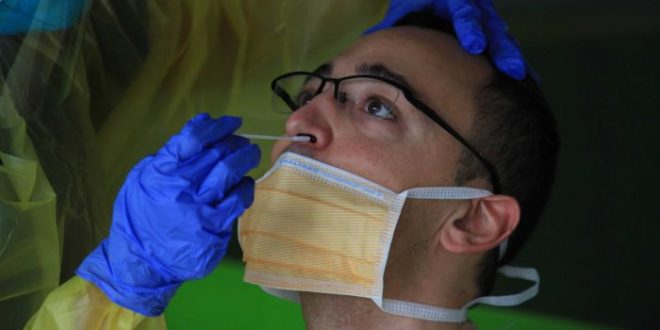 When it comes to coronavirus testing, not all tests are created equal

Australia is significantly expanding testing for COVID-19 across the country in order to stay on top of the virus and provide a path to re-open large portions of public life.

More than 630,000 people in Australia have been tested for the coronavirus, with the number of tests ramped-up to over 23,000 per day.

But not all tests are created equal.

If you get tested for COVID-19 in Australia, it will most likely be via a swab test.

Monique Isaacs was feeling healthy but nonetheless decided to get tested at a mobile COVID-19 clinic in Sydney.

“I suffer from asthma and it’s been getting worse,” said Ms Issacs.

The test, which involves a plastic swab gathering a sample via the nose or throat, identifies if the virus is present in that person, regardless of whether they are showing symptoms.

In late April, the so-called sentinel testing to detect COVID-19 within the community was expanded to all people with mild symptoms of COVID-19 — even those with just a scratchy throat or runny nose.

Testing is typically free for Medicare cardholders and available at a range of clinics around the country, often with no booking required.

The tests are processed in labs by microbiologists like Dr Feras Mirdad.

“Once we receive a swab, it’s processed through the central laboratory reception and then brought here to the microbiology lab. A scientist goes through and prepares the sample for the testing,” said Dr Mirdad.

The standard test takes somewhere between 6-12 hours to process, with patients usually notified of their result within 72 hours.

Twenty-four hours after being tested, Monique Isaacs received a text message informing her that she does not have COVID-19.

Unlike standard swab tests, which require sophisticated instruments and highly-trained staff like Dr Ferars Mirdad in larger labs to analyse results, rapid swab tests take less than an hour to produce a result at the point-of-care location the patient is tested.

There are strict criteria for using rapid tests and they are predominantly used in emergency and intensive care rooms.

Professor Greg Dore, an infectious diseases specialist at St Vincent’s Hospital and a research leader at the Kirby Institute, believes the rapid tests can be useful when laboratory tests are hard to access or too time-consuming.

“If the point-of-care test proved to be as effective as the laboratory ones, it may be used by more [regional] hospitals as well in remote Indigenous communities,” said Professor Dore.

While standard and rapid swab tests are costly to run, rapid blood tests are being touted as fast, easy and reliable alternatives.

Unlike swab tests, which test the gene of the virus, rapid blood tests screen two antibodies to COVID-19 from small blood samples within 15 minutes. The result can be interpreted by medical professionals as either a current infection, or as a recovery from the disease.

Australian suppliers, who have been selling the kits online, spruik the rapid test as “the 15-minutes ideal diagnostic test for COVID-19.”

“Using two drops of blood, get a result with 96.9 per cent sensitivity and 99.4 per cent specificity in 15 minutes,” one supplier’s advertisement reads.

Even British Prime Minister Boris Johnson called them a potential “total game-changer” and described rapid blood tests as being “as simple as a pregnancy test.”

Despite the ringing endorsement, Australia has banned the kits from being sold to the public, warning misuse or misinterpretation of the tests could have serious consequences.

Experts also remain cautious about using rapid testing both as a diagnostic test or a test for immunity.

“We really don’t understand a lot about antibody testing yet in terms of how long those antibodies do take to appear and in fact, what they mean when they do appear,” said Dr Gail Matthews, from St Vincent’s Infectious Diseases department.

The rapid blood tests were approved for use in Australia by the regulator, the Therapeutic Goods Administration (TGA), since late March.

Federal Minister for Health Greg Hunt indicated the Government has ordered 1.5 million of the tests for distribution to GPs.

Australian suppliers confirmed the rapid tests are being sold and used by GPs.

“Our kits have been deployed so far mainly in the General Practice setting. The response has been great,” said Dr David Badov, a local supplier of rapid test kits.

To enable the global supply chain to respond to Australia’s demands in time, the TGA did not conduct its typical validation of the kits, a process that usually takes months.

Instead, the Government engaged the Doherty Institute to run thousands of tests on the testing kits to validate their accuracy.

“We were asked to perform what’s called a post-market validation study,” said Professor Deborah Williamson, a clinical microbiologist who is leading the validation project.

“These were assessing the performance characteristics of tests once they had been given preliminary approval by the TGA.

“The purpose of doing that work was really to make sure that only high-quality diagnostic tests were entering the Australian market. That’s critical in this current pandemic.”

Studies conducted in Australia and overseas have found many available rapid blood tests are not accurate enough at identifying people who have COVID-19, a property called “test sensitivity”, or those who haven’t been infected, known as “test specificity”.

“Some of the overseas studies have shown that both the sensitivity and the specificity of these tests … are not quite what we would expect to use at a large scale.

“But one thing that is extremely clear at the moment is that these tests have limited if any role in the acute diagnosis of COVID-19,” said Professor Williamson.

“If you just use them in the very early stages where somebody hasn’t mounted an antibody result, then a false negative is a huge concern.”

Trent Warburton, managing director of TrendBio and one of the Australian-approved suppliers of the rapid blood kits, said the quality of rapid blood kits is another concern.

“There’s a lot of these kits flooding the market and I’m sure there’re very big variations in quality across those kits,” said Mr Warburton.

“We probably get half a dozen a day from companies with no track record of making diagnostics, selling rapid test kits to COVID-19.

“They have no certifications, no validation studies to back-up the use of their kits.”

The only way the rapid kits should be used, he said, is as a supplement to swab tests.

“I think it’s a good test to run in conjunction with the [swab] test, particularly when there’s a negative but someone has symptoms,” he said.

“It’s a supporting test, it’s not a diagnosis test.”

In response to growing controversy, several overseas manufacturers have posted online statements defending the quality of their products, while conceding they are unlikely to be suitable for early screening of COVID-19.

In a statement, the TGA said its expedited approval process for inclusion of COVID-19 tests is based on evidence from certified manufacturers and studies provided at the time of application.

“The TGA has contacted all sponsors of serology-based COVID-19 point-of-care tests currently included on the [Australian Register of Therapeutic Goods] to request they provide further information about the devices, their distribution, and samples of these devices for evaluation.”

In a statement to the ABC in relation to questions about rapid blood test kits, the Therapeutic Goods Administration said the Doherty Institute’s findings would be “taken into consideration”.

The TGA also said that “inconsistencies in performance claims would be investigated”.

Despite controversy surrounding the best use of rapid blood tests, scientists are confident serology-based antibody tests will still play an important role in tracing the virus transmission of COVID-19.

At Westmead Hospital in western Sydney, pathologists are leading the race with the development of a more accurate serology test.

While current diagnostic testing only returns a positive result if the person is still sick with the virus active in their system, serology testing shows if someone has had COVID-19 previously and recovered prior to testing.

“We’re actually able to time when that person might have had their infection, whether it was a week or two weeks, or a few months ago,” said Dr Matthew O’Sullivan, a clinical pathologist.

He said the next project for the lab is something called sero-survey testing, where random blood samples are examined to gain a better insight into the full scope of the outbreak.

“This gives us a very good idea of the actual overall incidence of this disease in the community. It tells us whether or not the numbers of cases that we’re seeing based on the swab test is a good reflection of how many cases are actually occurring,” said Dr O’Sullivan.

Professor Murphy said the tests aim to “be absolutely sure that we are capturing every case that we can and that we’re not missing cases.”

In a statement to the ABC, the Department of Health said it is “likely that serology tests will be relevant for the next phase of surveillance testing, or when a greater proportion of the Australian community has been exposed to the SARS-COV-2 virus.”