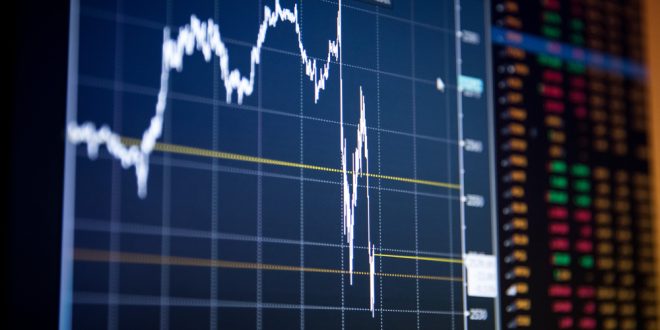 Equity markets are quickly giving up their gains garnered over the past few weeks as the pandemic refuses to fade away.

S&P 500 lurched this morning, down as much as 3.3 per cent after parts of Beijing were shutdown over the weekend following reports of more 40 new coronavirus cases, and the U.S.’s inability to contain the number of cases. The Stoxx Europe 600 index was down as much as 2.6 per cent in London, while Asian stocks lost about 2.4 per cent, on track for the worst day since March 23, Bloomberg data shows.

“Equity markets slumped last week, with the TSX giving back 3.8 per cent, and the weakness looks to continue into this week as concern about a second wave of COVID infections rises,” Bank of Montreal economist Robert Kavcic said in a note. “Energy slumped 9.2 per cent last week, while banks shed 4.3 per cent of their recent rally…. The loonie slipped alongside the broader risk-off move, and it remains under modest pressure this morning, trading at 1.365/USD.”

A number of seasoned analysts believe the market rally, which has defied the gloom surrounding the wider global economy, was driven by younger retail investors who were unable to go out, watch sports or bet in casinos. The stock market was their outlet to speculate and make quick money. But there will now be a reckoning.

“After a steady climb since late March, last week’s move was a wake-up call for retail and institutional investors alike,” Amy Wu Silverman, strategist at RBC Capital Markets, said in a note Saturday. “Veteran investors have experienced bumpy markets before. How will the newly minted COVID-19 at-home day traders react to the first major hiccup since the late March bottom?”

Silverman said the “Robinhood effect” — the impact of novice investors trading over the Robinhood Financial platform — “has been fascinating and a bit frightening to watch.”

Central banks may once again be called to calm frayed nerves. U.S. Federal Reserve governor Jerome Powell will give a testimony to Congress on Tuesday and Wednesday, which will hopefully offer more insight into his comments last week of a gloomy outlook that spooked markets.

In Canada, we will hear from Tiff Macklem, the new Bank of Canada governor, for the first time when he testifies before the House Finance Committee on Tuesday.

With U.S. West Texas Intermediate crude also falling, down 1.3 per cent at $35.77 this morning, analysts expect Macklem to rummage in his monetary toolbox to support the economy if needed.

While there have been some positive signs, employment in Canada will likely to remain below pre-virus levels “for years” which, together with the sharp reduction in immigration, means the housing market remains a big risk to the outlook, notes Capital Economics analysts.

“That risk is one reason why we expect the recovery to lag that in the US, and why we think the Bank (of Canada) will add further policy support before long, though we doubt it will take interest rates negative.”

But some analysts are dismissing the market swoon.

“While the market is certainly a little skittish, it makes perfect sense as we begin to reopen and recover,” David Zervos, analyst at Jefferies LLC, an investment bank, said in a note. “Through the process there will be bouts of too much optimism and too much pessimism. However, if the pessimism becomes too severe, the Fed will amp up its policy response. In the end, the highly asymmetric policy stance should lead to highly asymmetric bouts of market optimism over pessimism.”

DOUBLE-DOUBLE TRACKING: Tim Hortons is logging detailed location data of customers through its app — and many may not realize it’s happening at all, writes James McLeod.

Canadian household sector’s net worth fell by $443.4 billion to $11,293.9 billion in the first quarter as equity markets plunged, according to Statistics Canada. The value of financial liabilities rose $14.3 billion, while financial assets fell $532.0 billion.

Investors like to make statements that could be misguided and lead to wrong decisions within their portfolios. Here are some better alternatives to commonly heard investor refrains, writes Peter Hodson.

Today’s Posthaste was written by  Yadullah Hussain (@Yad_Fpenergy), with files from The Canadian Press, Thomson Reuters and Bloomberg.

Have a story idea, pitch, embargoed report, or a suggestion for this newsletter? Email us at posthaste@postmedia.com, or hit reply to send us a note.

Previous ‘A challenging set of numbers’: NSW economy to shrink by 10 per cent
Next Coronavirus: Cosas calls for mass testing of pupils, vows to shut down schools | News24