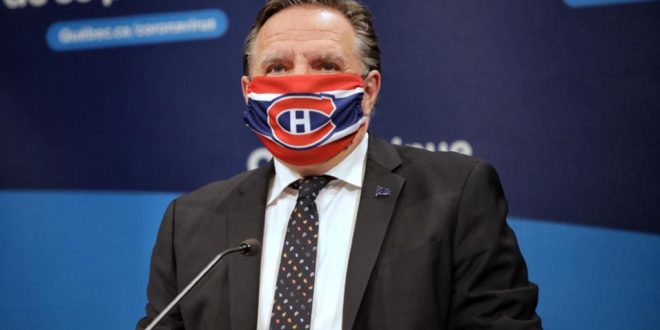 Legault sported a Montreal Canadiens face mask to his daily COVID-19 press briefing on Thursday, which was held in Montreal instead of Quebec City as usual. The mask was a gift sent to him by the Montreal Canadiens captain, even though Legault joked that he believed Weber should be traded back in January.

“In January I had suggested that (Weber) be traded, and he still sent me a mask,” Legault joked during the press conference.

The tweet, translated to English reads: “Thanks to Shea Weber, the captain of Canadiens, who sent me the mask I wore today at the press conference and which was manufactured by the company Image-Folie. He doesn’t seem to be resentful, because I offered to exchange him last January!”

The team seemed to have a good sense of humor about the Premier’s joke, tweeting that he looked good in their team colors and they would pretend they didn’t hear his past comments about their captain.

The team then followed up with with another post saying the Premier was “looking good.”

The company that makes the masks, Image Folie, has made them available for the public to purchase.

Previous In the Midwest’s coronavirus capital, cases highlight a historic racial divide
Next Just 12 new COVID-19 cases in B.C., as number of patients in ICU falls below 10