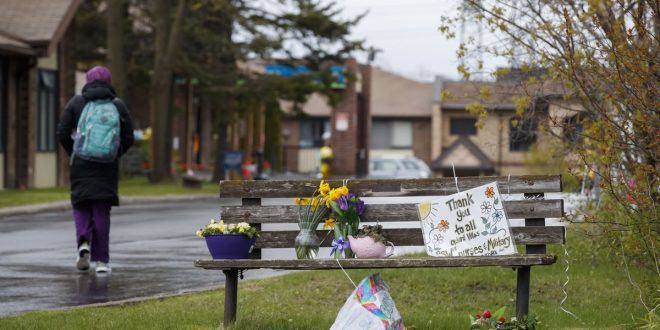 Ottawa should establish national rules and provide significant funding for long-term care to ensure high standards and avoid a repeat of the COVID-19 crisis in nursing homes, a group of 10 sector experts recommends.

In a report prepared for the Royal Society of Canada, the experts call on Ottawa to work with the provinces and territories on a national plan to overhaul the long-term care system to address widespread deficiencies, beginning with staffing.

Nursing and retirement homes have been hit hardest by COVID-19 in Canada, with more than 1,000 outbreaks and just more than 80 per cent of the country’s deaths – a long-term care mortality rate far higher than that of other wealthy countries.

“Canada’s reality is that, without federal financial support, provincial and territorial governments are unlikely to have resources for the high standards that our frail elderly deserve in nursing homes and LTC more broadly,” says the document, obtained by The Globe and Mail before its release on Friday.

Ottawa has faced similar recent calls to shoulder a significant, continuing role in the long-term care system. The federal government has so far sent in the military to help in hard-hit nursing homes in Ontario and Quebec and promised up to $3-billion for wage top-ups for low-income essential workers, including in long-term care.

The authors of the report suggest the creation of a national framework for long-term care similar to the Canada Health Act. Long-term care is currently a provincial responsibility.

“Reform and redesign must tackle not just the pandemic crisis, but also long-standing systemic failures – root causes – of the pandemic crisis in nursing homes in Canada. To fail in doing this leaves us with our currently woefully inadequate LTC system and the certainty that the next crisis will create similar or more catastrophic outcomes,” the 55-page document says.

As a first step, the provinces and territories, with new funding from Ottawa, should tackle the staffing crisis by implementing equitable pay and benefits for personal support workers as well as full-time positions for all staff, the report says. It also urges education standards, more training and mental health supports.

The report also calls on Ottawa to develop national staffing standards and earmark new transfer payments to provinces and territories that meet objectives, saying one of the “most critical components of quality in nursing homes” is the right amount and type of staffing. Despite reductions over time in levels of regulated caregivers, such as nurses, there is little Canadian data on the appropriate mix of workers and minimum hours of daily care per resident.

In addition, the report calls for nursing home funding to be tied to continuing, publicly accessible evaluations of measures of quality and safety.

However, the document does not provide cost estimates for reforming the long-term care system.

In late May, after the military released a report on horrific conditions in five Ontario nursing homes, Premier Doug Ford said provinces need federal funding to fix the system’s failings and called for national standard operating procedures. Prime Minister Justin Trudeau said at the time Ottawa would provide support and the country needs to do a better job of caring for seniors in long-term care.

The report says that in addition to a high mortality rate in nursing homes, the novel coronavirus created a “humane crisis,” with some residents left to die alone while others were abandoned without food or water.

Long-term care residents were especially vulnerable for several reasons, the report says, including prepandemic planning that focused almost exclusively on hospitals, shortages of personal protective equipment, staff who spread the virus by working at multiple facilities and older buildings with shared rooms that made isolating sick residents difficult.

The Royal Society’s report also urges immediate steps to prepare care homes for a potential second wave of the coronavirus, including regular in-person public health unit inspections, infection prevention training, provincial management of procurement of personal protective equipment and ensuring sick residents can be properly isolated in facilities or, when that is not possible, sending them to hospital.

The report notes that despite multiple reports on unacceptable long-term care conditions in Canada, necessary fundamental change hasn’t yet occurred.

“At the end of the day, no matter what we do or how many fine minds we put together, we have to decide what an older Canadian should be able to expect when they go to a nursing home. That’s a choice and that’s a choice that’s embedded in Canadian values,” Carole Estabrooks, chair of the Royal Society’s long-term care working group and a professor at the University of Alberta, said in an interview. “At its core, it’s about do we place as much value on a life that has been lived to one that’s going to be lived?”

Previous The coronavirus pandemic could spell disaster for our rainforests — and the communities that protect them
Next ICMR note says Covid vaccine for public use by August 15, experts say unrealistic