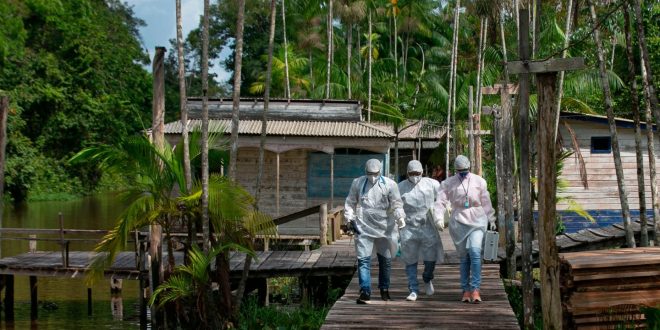 The burning season is about to begin in Brazil, where Indigenous Amazonians already face a frightening rise in infections with COVID-19. The virus has been spreading rapidly through Brazil, where nearly 1.5 million cases have been reported so far. Within the country’s Indigenous communities, deaths linked to the virus have risen more than fivefold in the past month, according to APIB, Brazil’s Indigenous Peoples association.

“2019 was the highest deforestation year that Brazil has seen in the last 15 years and 2020 looks like it’s going to be even worse. Projections show that we’re looking at something like between 12,000 and 15,000 square kilometers of deforestation by the end of the year,” says Marcia Macedo, a landscape ecologist with the Woods Hole Research Center. Her research employs remote sensing, field observations and statistical models to study the impact of government policies, drought and deforestation in fueling the burning season in the Amazon.

“With that deforestation unfortunately comes fire and that’s a potential ignition source even for standing forests in those indigenous lands and protected areas. Add to that a global pandemic crisis and the potential for respiratory distress from the smoke plumes that are generated from those fires and you have a real recipe for environmental and public health catastrophe.”

WHAT YOU NEED TO KNOW ABOUT CORONAVIRUS RIGHT NOW

HERE ARE THE 6 WAYS THE CORONAVIRUS PANDEMIC COULD END

YOUR BLOOD TYPE MAY AFFECT WHETHER YOU GET CORONAVIRUS

Marcedo says that they know the solution, it’s just a matter of implementation. “We have to stop deforestation,” she implores. “We have to stop fires and we know that indigenous people have a lot of the tools and the knowhow and certainly the motivation to do that good work and yet they’re also at the moment, the most vulnerable to the COVID-19 pandemic, the most vulnerable to climate change and certainly vulnerable to public policies that are threatening their land rights and illegal incursions into their land so in a moment when they need our support the most, things are pointing in another direction and that seems counter-strategic because the science is absolutely clear.”

It was mid-March that Guatemala reported its first COVID-19 infection while also confronting its most severe forest fire season in recent times, according to recently released satellite data. The tiny country, which at this point has recorded a little more than 19,000 cases, may have valuable lessons to offer larger Brazil — experts warn of a drier than usual rainy season this year in the Brazilian Amazon, while suggesting that spotty law enforcement and policies that encourage illegal land clearing spell disaster for the region and for the Indigenous and rural communities that have protected these forests for hundreds of years.

America is changing FASTER THAN EVER. Add Changing America to your Facebook and Twitter feeds to stay engaged on the latest news and smartest insights.

With governments distracted by the pandemic, human-caused fires continue to pose a major threat to the ecology of regions in Brazil. This year, blazes have already been detected in the Brazilian Amazon rainforest, months ahead of the typical fire season.

Human-caused fires not only pose a major threat to the ecology of Brazil, but also a health risk. The fires’ smoke is adding to the problems of the pandemic by placing more stress on people’s lungs, and the country may experience another spike in forest fires as enforcement of environmental laws lapses and pressure mounts to exploit their riches. It doesn’t help that since coming to office, President Jair Bolsonaro of Brazil has enabled increased razing of the Amazon rainforest.

“I see opportunism fueling illegality as people take advantage of the fragility of the moment we’re living, politically as well as economically,” Ane Alencar, the director of science at Ipam Amazônia, told The New York Times. “This coronavirus crisis is turning into an environmental crisis, too.”

In the first half of the year, the region has experienced an uptick in illegal loggers, miners and land grabbers that have cleared vast areas of the Amazon with impunity, as enforcement efforts were shot by the pandemic. In fact, an estimated 464 square miles of Amazon tree cover was slashed between January and April, which is a 55 percent increase from the same time last year and an area about 20 times the size of Manhattan, according to Brazil’s National Institute for Space Research, a government agency that uses satellite images to track deforestation.

A spark of hope

Yet, in a large swathe of the Mayan Biosphere Reserve, Central America’s largest continuous tract of tropical forests, local Maya communities in Northern Guatemala have managed to successfully reduce the incidence of forest fires to near zero on their government-granted concessions, while successfully protecting their communities from the novel coronavirus — for now.

“These activities are largely financed by the communities, through their income made through timber and non timber forest management, which generates about half a million dollars per year.”

Connecting back to the situation in Brazil, Davis and other experts believe that the successful efforts by indigenous communities in Guatemala have many important lessons to be learned. “So what have the keys of this model been?” Davis asks. “The first is the recognition of community land rights. Community land rights establish the framework of collaboration between communities and governments, and it also helps communities keep out outsiders who have an interest in promoting forest fires.”

“Finally, it’s important to have integrated community and government systems, both for prevention and control. We believe that this system in Guatemala can be an extremely useful model to expand in other parts of the world, not just in Brazil but across the tropics around the world. There’s a growing number of people realizing that doing so would achieve a number of goals…tackling climate change, reducing biodiversity loss, reducing poverty, curbing destructive wildfires, reducing pandemic risks caused by deforestation as well as the harmful emissions caused by forest fires.”

WE DON’T BELONG ON MARS, WE HAVEN’T LANDED ON EARTH YET

10 THINGS WE CAN ALL DO ABOUT CLIMATE CHANGE