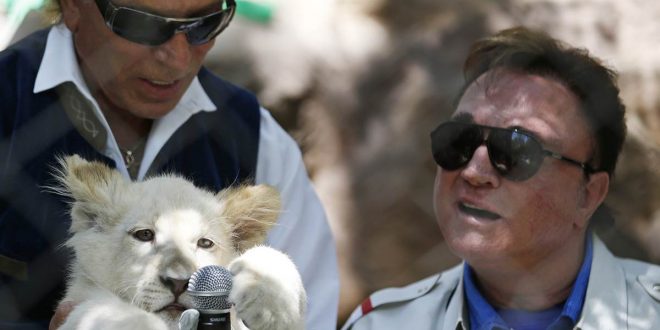 Roy Horn, half of the famed Las Vegas magic and entertainment duo Siegfried & Roy, has died of complications related to the coronavirus, partner Siegfried Fischbacher said in a statement Friday. He was 75.

Last month, Horn tested positive for the virus that causes COVID-19, a spokesperson for the duo said. He was being treated at a Las Vegas hospital and was said to be responding well to treatment.

“Today, the world has lost one of the greats of magic, but I have lost my best friend,” Fischbacher said. “From the moment we met, I knew Roy and I, together, would change the world. There could be no Siegfried without Roy, and no Roy without Siegfried.”

They put on shows in Las Vegas for decades, and their work with big cats became a staple of entertainment on the Strip.

In 2003, a 380-pound tiger, Mantecore, bit Horn’s neck during a show at the Mirage Las Vegas. It dragged him off stage. The attack crushed his windpipe and left the then-60-year-old partially paralyzed, ending the long-running “Siegfried & Roy” production.

Horn was born in wartime Germany as “bombs were exploding all around” his mother, according to the pair’s website.

The duo met more than 60 years ago when they worked on a cruise ship, Horn as a steward and Siegfriend as a magician, according to a statement from the act’s publicity firm. Horn ended up helping with the act.

They hit Vegas in 1967 and, in 1989, started a 14-year run at the Mirage that transformed the duo into a singular tourism draw. Their $30 million production at the hotel sold out nightly, according to the statement.

The pair used a collection of animals onstage that included white tigers, white lions, leopards, jaguars and an elephant

“Roy was a fighter his whole life including during these final days,” Fischbacher said. “I give my heartfelt appreciation to the team of doctors, nurses and staff at Mountain View Hospital who worked heroically against this insidious virus that ultimately took Roy’s life.”

Horn is survived by his brother, Werner Horn.

Dennis Romero writes for NBC News and is based in Los Angeles.