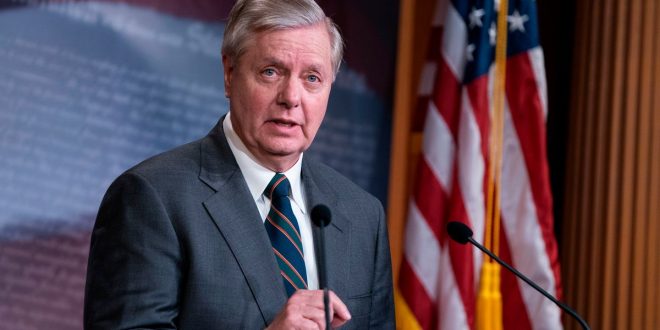 WASHINGTON ― Every Democrat on the Senate Judiciary Committee on Tuesday urged Sen. Lindsey Graham (R-S.C.), the chairman, to focus hearings on the coronavirus as soon as the Senate returns next week ― and to delay a confirmation hearing he is already planning to hold for another one of President Donald Trump’s judicial nominees.

“Now is not the time to process routine judicial nominations,” reads a new letter to Graham from all 10 committee Democrats. “We therefore urge you to delay the May 6 nominations hearing and instead focus the Committee’s efforts on responding to the COVID-19 pandemic and protecting the lives and livelihoods of all Americans.”

The Judiciary Committee has jurisdiction over a number of issues related to the health and economic fallout from the coronavirus, as the Democrats note, and Graham could immediately make this his focus if he wanted to.

He could, for example, hold hearings that look at the needs of state and local law enforcement on the front lines of the pandemic, the health and safety of corrections staff and incarcerated people, changes in immigration policy tied to the pandemic or the spike in hate crimes against the Asian American community.

That’s not going to happen. At least, not at the expense of judicial nominations.

Senate Majority Leader Mitch McConnell (R-Ky.) has made it clear that he plans to get back to confirming more of Trump’s judges as soon as the Senate returns from its monthlong hiatus. This has been his top priority since Trump became president, and he’s already delivered two Supreme Court justices, a whopping 51 appeals court judges and 138 district court judges. All are lifetime seats.

“Of course, we will go back to judges,” McConnell said in a March 31 interview on the Hugh Hewitt radio show. “My motto for the rest of the year is, ‘Leave no vacancy behind.’”

As luck would have it, the judicial nominee scheduled for next week’s confirmation hearing is a McConnell protege. Justin Walker, 38, is up for a seat on the D.C. Circuit Court of Appeals, the second-most-powerful court in the nation. He’s got three things going for him ahead of his May 6 hearing: McConnell has known him since high school, McConnell knows his grandfather, and McConnell recommended him to the White House last year for a Kentucky district court seat.

The American Bar Association gave Walker a rare and embarrassing “not qualified” rating when Trump nominated him last year. But Senate Republicans confirmed him anyway as McConnell raved about him. Now, barely six months later, Walker is poised to get a major promotion.

Is there any chance that Graham will postpone Walker’s hearing to focus on COVID-19 issues next week?

“Nothing to add at this time,” said Graham spokesperson Taylor Reidy.