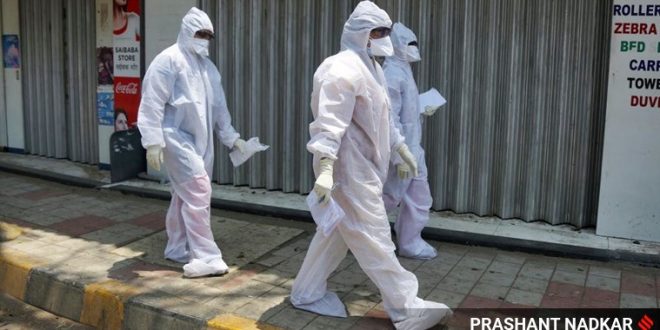 Covid-19 tracker: Twenty of the red-zone districts account for 60 per cent of the novel coronavirus case load in the country, data available with the Ministry show.

Covid-19 tracker: As the nationwide lockdown nears its scheduled end on May 3, the number of hotspot districts (red zones) has shrunk to 129 from the 177 — India has 736 districts — that were identified on April 15, after three weeks of implementing the curbs. The number of orange zone districts has risen from 207 on April 15 to 250 now, sources in the Health Ministry said.

Twenty of the red-zone districts account for 60 per cent of the novel coronavirus case load in the country, data available with the Ministry show. This data is crucial as the government explores modalities for relaxations after May 3.

Over the past few weeks, the disease has spread to more districts, but it is in the major urban centres of Delhi, Mumbai, Pune, Indore, and Ahmedabad that the clusters of larger and faster transmission have emerged.

The number of heavy case-load districts has increased, accounting for a larger share of cases in the country. At the end of the first week of April, only seven districts had more than 100 cases; by 22 April, this number was 24. In that period, the number of districts reporting cases jumped from 211 (April 1) to 429 (April 22).

The patterns are shifting in the districts with low case loads as well. A scrutiny of the list of districts labelled as red-zone districts and orange-zone districts indicates a dynamic battle ahead, as the country winds down its 40-day nationwide lockdown this weekend.

The number of orange zone districts has risen from 207 on April 15 to 250 now, sources in the Health Ministry said.

As per the Integrated Disease Surveillance Programme (IDSP), there were 85 districts that did not record any fresh case in 14 days as of April 27. But a scrutiny of the names of districts announced by the PIB through its COVID-19 bulletins through the month reveals that the composition of the list has been changing.

Two districts — SBS Nagar (Punjab) and Pilibhit (UP) — recorded fresh cases on Monday after they had been declared free of new cases in the previous 28 days on April 23. On Tuesday, Lakhisarai in Bihar dropped off the new list.

This number is much higher for districts falling off the list after 14 days of recording no cases. The comparison reveals that as many as 38 districts which had earlier been declared to have no fresh cases for 14 days were no longer among the IDSP’s list of 85 districts as of Monday. This means that these 38 districts recorded new cases after 14 days of lull.

Among the districts dropping off the list, six were in Bihar, five in Karnataka, and four in Haryana. Twenty of them had been reported as 14-day free on April 16; nine were reported on April 18.

Incidentally, all of these are low case load districts. In fact, the 85 districts labelled as 14-day free on April 27 account for only a total of 332 cases (less than 2 per cent) of the 18,985 cases on April 22 for which district-wise case load details are available on the Health Ministry’s website. The 16 districts with no fresh cases in 28 days accounted for only 22 cases.

The emergence of new cases after a continuous 14 or 28 days of no fresh cases during the lockdown indicates that these lulls are no assurance that the outbreak has been halted, and serves as caution against lowering the guard even in the relatively quiet areas.

The 14 days or 28 days of no new cases are an important aspect of the COVID containment strategy. At the end of the previous lockdown, the Ministry had stated in an April 15 note that “Containment operation would be deemed over when there is no case reported in 28 days from an area after last case tests negative. Hotspots (designated red zones) will be assumed to be undertaking effective containment activities, if no case is reported in next 14 days (designated orange zones) and will be deemed successful in containment, if no case is reported for 28 days (designated green zones).”

This dynamic nature of the battle against the outbreak would require constant vigilance, the Prime Minister told Chief Ministers on Monday. He said, “as per experts, the impact of coronavirus will remain visible in the coming months”, to emphasise the “importance for states to enforce guidelines strictly in the hotspots i.e., the red zone areas”.

“The efforts of the states should be directed towards converting the red zones into orange and thereafter to green zones,” he told the CMs.

📣 The Indian Express is now on Telegram. Click here to join our channel (@indianexpress) and stay updated with the latest headlines

For all the latest India News, download Indian Express App.