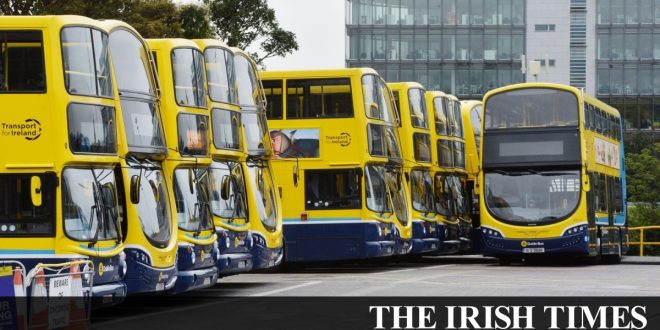 The State must provide immediate guarantees of funding for its public transport companies which are experiencing significant financial problems, the National Bus and Rail Union (NBRU) has said.

The NBRU said it would not under any circumstances “entertain the notion of job losses as a result of decisions made by faceless bureaucrats”.

The union said it would be “preposterous and untenable if Dublin Bus, Iarnród Éireann and Bus Éireann were to be left to run aground”.

The Irish Times reported on Monday that the board of the CIÉ group of transport companies advised Minister for Transport Shane Ross in a letter last week that the firms are facing a serious financial position due to plummeting passenger numbers caused by the coronavirus pandemic.

The three companies are being supported by the annual allocation that the State had earmarked to finance routes and services deemed essential but which could not be run on a commercial basis – known as public service obligation funding. However, it is understood Ministers have been advised that this money could run out by the end of next month.

Mr Ross said on Sunday that the Government was determined that there would be no interruption to subvented public transport operations as a result of Covid-19.

“We will continue to take whatever measures are necessary to support these essential transport services,” he said.

But there are concerns about Bus Éireann’s intercity Expressway network which is considered a commercial operation and receives no State funding.

Bus Éireann has commissioned external consultants to review Expressway and to look at routes and staffing issues.

NBRU general secretary Dermot O’Leary said on Monday “the fact that the three State companies and their dedicated staff have kept the wheels of public transport running throughout this crisis whilst other so-called bus operators went into hibernation should not and will not be forgotten.

“Bus Éireann’s Expressway remained practically the only so-called commercial service which continued to operate amid the Covid-19 crisis, serving over 40 Hospitals, a plethora of other medical services and has maintained a vital link into almost every nook and cranny across the country.

“The NBRU has for years, been warning that the saturation of the inter-urban motorway bus market with excessive capacity was designed to undermine Bus Éireann’s ability to maintain its Expressway services. The fact is that quite a large number of these services are essential social services that need State support to be able to serve the areas that large multinationals have no interest in serving.”

More from The Irish Times