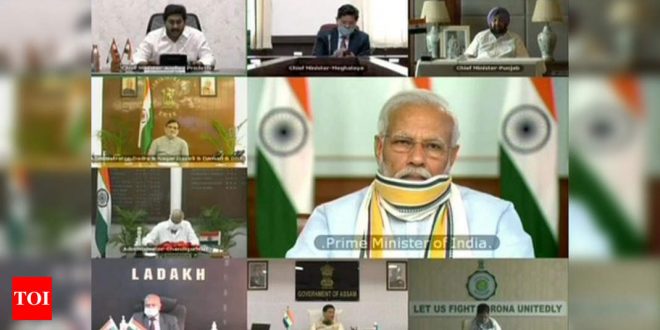 What the CMs told PM Modi during consultations over Covid-19

NEW DELHI: Prime Minister Narendra Modi on Monday chaired a fresh round of consultation with chief ministers on ways to strengthen the Covid-19 containment strategy and stepping up of economic activities in a calibrated manner as the 54-day nationwide lockdown nears an end.
Here’s what the chief ministers told the PM during the meeting:
Maharashtra chief minister Uddhav Thackeray strongly sought extension of lockdown saying it is impossible to contain spread of the virus without continuation of the lockdown restrictions,
West Bengal chief minister Mamata Banerjee demanded that the lockdown should be extended and at the same time complained that there should not be politics with states while handling the crisis. She suggested that country needs to fight unitedly.

Delhi chief minister Arvind Kejriwal said that economic activities should be allowed to resume in the national capital, except in containment zones.
Kerala chief minister Pinarayi Vijayan said each state is facing different challenges and should be given the freedom to make reasonable changes to the guidelines relating to the lockdown.
Tamil Nadu chief minister K Palaniswami opposed resumption of passenger train and air services in the state till May 31 and sought more PCR kits from the Centre to ramp up the ongoing aggressive testing.
Punjab chief minister Amarinder Singh pitched for the extension of lockdown, but with a carefully crafted exit strategy backed by economic empowerment of states to save lives and secure livelihood.
Rajasthan chief minister Ashok Gehlot demanded a blanket ban on movement of people from Red Zone to Green Zone
Haryana chief minister Manohar Lal Khattar said his state will contribute to the country’s GDP immensely with good yield of wheat crop.
Odisha chief minister Naveen Patnaiak didn’t demand extension of the lockdown but suggested that there should be a broad lockdown principles with states having discretion to implement them in decentralised way. He also suggested that the train movement should be allowed after consulting the state governments.
Gujarat chief minister Vijay Rupani suggested that metro services should be resumed in safe areas, which have not reported any infections.
Telangana chief minister K Chandrasekhar Rao opposed resumption of passenger train services and said allowing them would lead to movement of people and pose problems in testing and quarantining them.
Chhattisgarh chief minister Bhupesh Baghel said the Centre should allow state governments to decide on red, green, orange zones based on severity of the

situation in areas under their jurisdiction.
In Video:PM Modi-CMs meeting: Mamata Banerjee objects to Centre sending ICMTs to West Bengal