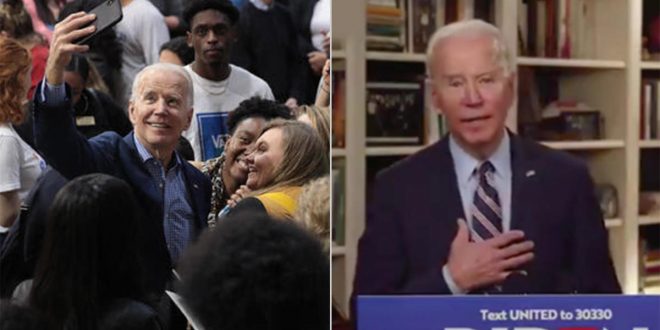 Just weeks ago, Joe Biden was riding high on stunning primary wins, starting to fill rallies with thousands, dominating headlines, and quickly coalescing the Democratic Party around his candidacy. Now he is hunkered down in his Wilmington basement, forced to communicate through live stream technology that he says took four days to install.

In normal circumstances, Biden would be the figurehead of his party. But in the wake of the coronavirus, local leaders and governors like New York’s Andrew Cuomo are on the front pages and at the frontlines of a global health and economic crisis.

On the trail, the former vice president used to spend hours a day glad-handing with potential voters on the ropelines but now he’s been consigned to the role of sideline Senate sage.

“I’m chomping at the bit,” he told reporters on Wednesday during a virtual press conference on Zoom. “I wish I were still in the Senate being able to impact on some of these things…but I am where I am.”

Biden spent over three decades as a U.S. senator and was a key Capitol Hill negotiator during his tenure as vice president. In the Obama administration, he was tasked with managing the $800 billion stimulus package to address the financial crisis. He led the task force on the Ebola outbreak. And he took on a role of top consoler, drawing upon his own family tragedies to connect with everyday Americans. As he inches closer to clinching the Democratic nomination for president — and as the contest has turned into a real-time test for commander-in-chief — Biden’s campaign would seem uniquely positioned to capitalize on the current environment.

Yet, he’s facing difficulties getting attention. Case in point: An interview on “The View,” the first stop of Biden’s scheduled media blitz on Tuesday, was preempted in New York and Washington D.C. markets by press conferences by Cuomo and D.C. Mayor Muriel Bowser.

Later in the day, he joined cable news hosts for almost a combined hour, greatly increasing his public appearances from last week, and explained how he spends his mornings in 90-minute briefings and consults with state and congressional leaders. As he sat in his broadcast chair, sometimes with his arms folded, he seemed at times to veer off message, and clarified at least one apology after comparing the president to a yo-yo when asked about the White House’s statements on China. The former vice president was also interviewed by CBS News’ Major Garrett for an “Evening News” piece Wednesday.

Biden also has to contend with the potential rallying effect around the current president in a time of crisis. The former vice president has been critical of President Trump’s handling of COVID-19, arguing his response was too slow and diluted. But some recent polls show the president has actually received a boost in support during this pandemic response. Gallup found his approval ticked up five points to 49%. A CBS News poll found that 53% of Americans say Trump is doing “a good job” handling the coronavirus outbreak, and 54% say they are optimistic about his administration’s ability to handle it from here.

“I don’t care whether the president’s numbers are going up or down,” Biden said when asked about the bump and later added, “I hope that he is so strong that he is way above [current approval] because we need the help now.”

As much as Biden needs to create a one-on-one national contrast with Trump, “it’s hard to find equal footing with a president that is enduring a national crisis,” says Democratic strategist and former Senate staffer Joel Payne. “In addition, the Democratic focus is on leaders in office — governors, mayors, Speaker Pelosi and Leader Schumer. So Biden has to, in a way, wait his turn to have the opportunity to be the party spokesman.”

To do that, the campaign is retrofitting Biden’s home to be able to compete. His current skeletal staff (most, like the rest of the country, are working remotely) are donning masks and gloves around his house and have been forced to take on the duties of television producers.

On Wednesday, the former vice president got a glimpse into the lives of stuck-at-home campaign reporters, as their bedrooms and living spaces were broadcast into view while they questioned him during the campaign’s first virtual press conference.

In that conversation, he spoke candidly about how he is adjusting to the new normal of a virtual campaign. “I’m finding out that, what you’ve mastered long before me, that the new technologies are quite effective,” he said. Biden noted that his address earlier in the week outlining his pandemic plan “didn’t get covered by the national networks, but [I] found out 3.8 million people watched it online.”

There are personal constraints, too. Biden, who is extremely close to his family and often has children or grandchildren on the campaign trail with him, said he has to keep a safe distance from his grandchildren who live nearby. “”They walk through the woods and sit in the backyard, and we sit on the porch,” he said in an interview with CNN on Tuesday. “We’re not able to go down and hug and kiss them.”

Another shadow over Biden’s spotlight is his ongoing battle to clinch the Democratic presidential nomination. With many states pushing their primaries until June due to health concerns, Bernie Sanders shows no signs of conceding and has been using his own online social network to host coronavirus town halls. His campaign said Tuesday he hopes to debate Biden again in April.

“My focus is dealing on this crisis right now,” Biden said. “I think we have had enough debates. We should get on with this.”

While campaigning during “social distancing” has presented challenges, it has also allowed the mostly traditional campaign to shake things up.

Later on Wednesday the teetotaling Biden is inviting “young Americans” to grab their favorite beers, wines or alternatives and join a “virtual happy hour,” according to the invite, an effort to reach out to a voting bloc he has struggled to attract.