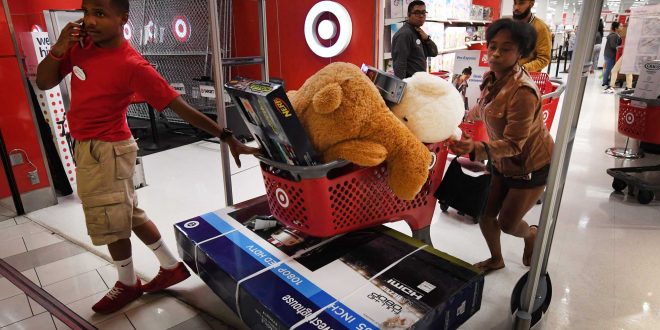 Target on Tuesday outpaced fourth-quarter earnings expectations, but revenue fell short because of weak sales of toys, electronics and home goods over the holidays.

Shares were up fractionally in premarket trading.

Here’s what Target reported compared with what analysts were expecting, based on a survey of analysts by Refinitiv:

Excluding items, Target earned $1.69 per share, which was higher than the $1.66 per share analysts were expecting, according to Refinitiv.

The discount retailer has invested in its stores and expanded its e-commerce business, as many other retailers have struggled and shuttered brick-and-mortar locations. It has launched thriving apparel brands and recently added a new activewear line, All in Motion, and new luggage line, Open Story.

Target’s comparable digital sales were up by 20% in the fourth quarter. That’s lower than the 31% growth it had in the third quarter and in the same period a year earlier.

Target said same-day services were a major driver in the fiscal fourth quarter. The retailer offers same-day pickup in store and by drive-up and has same-day delivery of packages through Shipt. The company said those same-day services accounted for more than 80% of its comparable digital sales growth during the period.

“The strategic investments we’ve made over the past several years to elevate the shopping experience, curate our multi-category assortment at scale, and deliver ease and convenience through our fulfillment capabilities are deepening our relationship with our guest,” CEO Brian Cornell said in a news release.

Target surprised Wall Street in January when it disclosed slower-than-expected holiday sales, but it saw continued strength in apparel, beauty and food and beverage. A company spokesperson said strong sales in those categories meant there were fewer bargains leftover for after-holiday shoppers. That meant higher profits, but fewer sales.

In the first quarter of fiscal 2020, Target has called for $1.55 to $1.75 earnings per share and for same-store sales to grow in the low single digits.

Analysts surveyed by Refinitiv estimated Target would earn $1.66 per share on revenue of $18.19 billion and same-store sales would grow by 2.7% in the quarter.

In fiscal 2020, Target has said earnings per share will range from $6.70 to $7, compared with analysts’ estimates of $6.87. It said same-store sales will grow by the low single digits, while analysts said they’ll be up by 3.2%

Target’s shares have gained nearly 50% over the past 12 months, bringing its market value to $55.3 billion.

CORRECTION: This article has been updated to show that Wall Street is expecting earnings per share of $1.65.