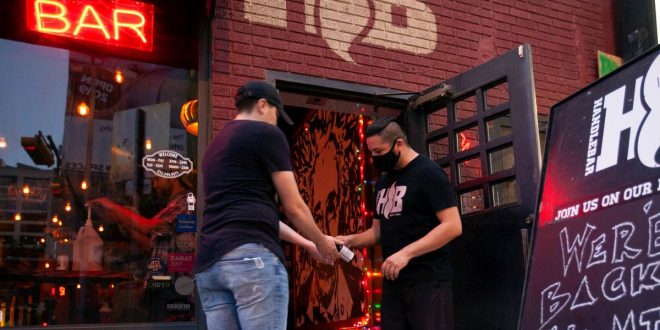 The governors of Texas and Florida both ordered bars closed across their states Friday as confirmed COVID-19 cases there continue to hit record highs.

The sweeping action marks a reversal of what critics worried was a rush to reopen following coronavirus shutdowns earlier this year. Bars are especially dangerous environments for the spread of the disease.

Florida reported a record high of 8,942 new cases of coronavirus Friday ― an increase of 7.8% for the total cases in the state, and easily besting the previous record of 5,508, set just two days prior.

In Texas, new rules limit bars to takeout and delivery only, while restaurants are limited to 50% capacity. The state also shut down rafting and tubing businesses Friday and restricted outdoor gatherings to less than 100 people.

“As I said from the start, if the positivity rate rose above 10%, the State of Texas would take further action to mitigate the spread of COVID-19,” Gov. Greg Abbott (R) said in a release. “At this time, it is clear that the rise in cases is largely driven by certain types of activities, including Texans congregating in bars.”

Notably, Texas’ order specifically exempts indoor religious services from the occupancy limit, even though such gatherings are responsible for many of the “superspreading” events where large numbers of people fall ill. Earlier this month, 236 members of a church congregation in eastern Oregon became sick after attending services there.

As cases rise rapidly in Florida, Gov. Ron DeSantis (R) is facing explosive accusations of “cooking the books” by the state’s former leading COVID-19 data scientist, Rebekah Jones, who says DeSantis is trying to minimize the true impact of the disease. Jones says she was fired in in May for refusing to distort data.

In May, the state shut down a web portal where consumers could report businesses for failing to follow COVID-19 guidelines. A spokeswoman told WLRN reports had decreased to the point that the portal was no longer needed, but Department of Business and Professional Regulation records obtained by the outlet show they’d actually doubled from April to May.

DeSantis, who was one of the last governors to issue stay-at-home orders in April, previously blamed the surge on an increase in testing.

Clarification: Language has been amended to indicate that the percentage increase of cases in Florida is for the total number of cases, not the number of new, daily cases.