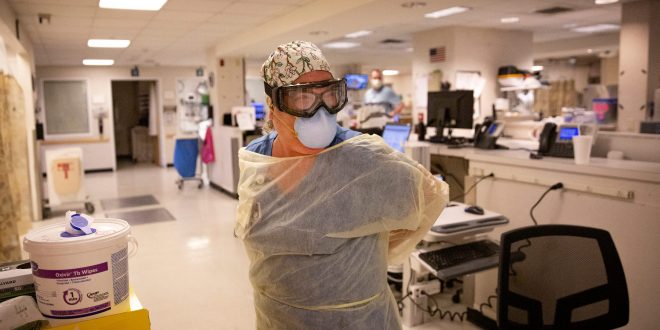 ‘The curve is no longer flat’: Nearly half of Florida’s ICUs are at least 90% full

FORT MYERS, Fla. – Nearly half of Florida’s intensive-care units are at least 90% full, and more than 1 in 5 are completely full, according to state data.

Hospitals are increasingly strained under COVID-19. Hospitalizations have jumped more than 13% just since July 1 across the state. More than 17,100 Floridians have been hospitalized for COVID-19 since the start of the pandemic.

Those at high and full capacity are spread among 36 counties, including Lee, Collier and Charlotte.

At least 4,111 people in Florida have died from the virus, according to the state — a figure that would have made it the ninth leading cause of death in Florida last year, according to Florida Department of Health statistics. Florida set a one-day record Thursday with 120 deaths. The previous high, 83, was in late April.

Florida counted 8,935 more cases of the novel coronavirus Thursday, bringing the state’s total number of cases to 232,718. That’s more than 1% of the state’s population of about 21.5 million.

Travel: Is it safe for Disney World to reopen this weekend as coronavirus cases soar in Florida?

Some hospitals are scaling back elective surgeries and taking other measures to make sure enough beds are available to treat COVID-19 patients.

“This is a necessary action we must take to keep our hospitals from being overrun and for the overall well-being of our community,” Larry Antonucci, CEO of Southwest Florida’s Lee Health hospital system, said Thursday as he announced that elective surgeries will be reduced, based on a daily review of patient volumes.

The hospital system is currently treating 316 patients with COVID-19, all of whom must be isolated and require those treating them to wear extra protective gear.

“At our current rate, Lee Health hospitals will be completely full by the end of the month. We must act now to reduce the spread of the coronavirus,” Antonucci said. “Three months ago, everyone joined in a shared goal of flattening the curve, which was temporarily accomplished … the curve is no longer flat, instead we have a spike in cases and the spike is growing fast.”

Hospitals in the state’s more populated regions, including Miami and the I-4 corridor, have been short on beds. That includes 21 ICUs in Miami-Dade and Broward counties and hospitals throughout Orange, Pinellas and Hillsborough counties.

DeSantis also announced an agreement to provide up to 150 additional medical workers to Miami’s Jackson Memorial Hospital, which has been swamped by coronavirus cases. Lee Health has so far not received any such assistance, spokesman Jonathon Little said.

Agency for Health Care Administration Secretary Mary Mayhew said Tuesday’s announcement of the opening of another long-term care facility for those with the virus was important, given the number of strained hospitals statewide.

“(It) helps us prevent one case from becoming 10, five to becoming 20,” said Mayhew, who was in Miami with DeSantis.

ICU numbers fluctuate daily, depending on the seriousness of cases, and full hospitals have been able to transfer patients to other facilities to free up beds, Stickle said.

“All hospitals have surge plans that can accommodate the increased need/demand for care,” Stickle wrote in an email. “At any point in time, hospitals are prepared to increase the number of available ICU beds and access to necessary clinical resources and equipment up to 30-40%.”

In Florida, 14.15% of tests reported positive for the novel coronavirus. Positivity rates have more than tripled over the last month, a sign that the virus is spreading uncontrolled throughout the state.

A Yale School of Public Health study published this week found that more than half of new U.S. cases are found in people with no symptoms of the virus.

Doctors called this a “silent disease transmission” and said it points to the need for increased testing of the population and follow-up tracing and isolation of all who come in contact with these asymptomatic carriers.

However, DeSantis on Tuesday downplayed the effectiveness of contact tracing. While acknowledging that he has steered $138 million to the state Health Department for such follow-up work when someone is reported with the disease, he said in Miami, “Most of the people walking around with this, they either don’t know they have it or have very mild symptoms and will never come in contact with the Health” Department.

“Another problem that you’ve seen is, particularly the younger folk, they aren’t cooperating with contact tracers,” he added. “So when they’re trying to call, they’re just not getting a lot of support.”

But Dr. Purvi Parikh, a New York allergy and infectious disease specialist and board member with Physicians for Patient Protection, a health care advocacy organization, said DeSantis was wrong to minimize the role of contact tracing.