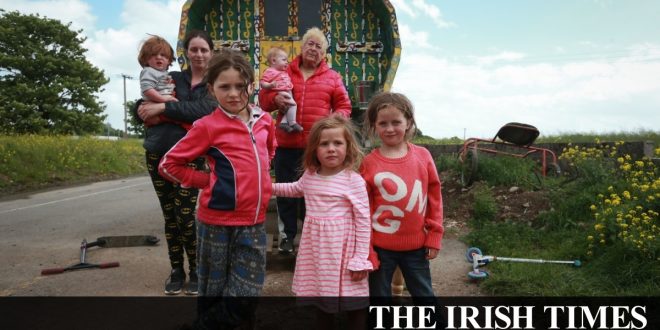 Traveller realities amid the pandemic: ‘I thought I’d never see a sup from a tap again’

Brigid Harty (28), her husband, John Reilly, and their nine children – all under 12 – share a caravan on a muddy, rocky site just off the M8 motorway outside Cashel, Co Tipperary.

Also on the site are John’s parents, Nellie (62) and Willy (73) Reilly, who share a traditional, brightly painted wagon. Pretty though it is (tourists stop to take photographs), the wood is crumbling, the interior is cramped and dark, and Nellie shows how, when it rains, water soaks through the tarpaulin roof.

“We got this years back. In the cold and wet, it’s not good for your health,” she says.

For most of their two years on the site they have had no running water, toilets or secure electricity supply. They collected water from a service station across the road, filling basins to wash themselves and their clothes.

With the Covid-19 crisis, however, and following direction from the Department of Housing, Tipperary County Council has provided a 1,000-litre water butt and two portaloos.

A March 18th circular told councils that some members of the Traveller community, especially those on sites with limited facilities, “may be particularly vulnerable” to Covid-19 and “extra measures may need to be put in place”. These included toilets, running water, additional accommodation to ease overcrowding, extra refuse collection and additional units (either mobiles on site or houses elsewhere) that could be used for self-isolation.

“It should be noted that every effort should be made to find prompt and practical solutions on existing sites . . . The Traveller Accommodation Unit has some funding available for essential mitigation works and any such requests will be prioritised within 24 hours,” the circular said.

Take-up of this funding has been mixed, with 19 of the State’s 31 local authorities – they are not named – drawing down a combined €1.7 million, the department said.

Advocates say it has taken a global pandemic for vulnerable families, including hundreds of children living in poverty, to get basic services, and that the progress is welcome. However, the fear is that the facilities will disappear when the pandemic passes.

“We cannot go back after this,” says Martin Collins of Pavee Point. “In this day and age it’s not acceptable for people to have to walk for water. We need to make sure that this crisis is used to bring about positive change.”

The Reillys say the water provided is welcome, but that the tank is filled once a week and runs out after four days. The portaloos, Bridget adds, have not been emptied for three weeks and one is very dirty, while the second cannot be approached without retching due to the smell. The families still clamber into an adjoining field to go to the toilet as they fear someone could catch an infection from using the portaloos.

Nellie, who has asthma and diabetes, says: “Ah, ’tis wrong the way we are living at this time and age.”

The family does not know if they will be permitted to keep the water butt and toilets after the pandemic. A spokesman for Tipperary County Council said the portaloo contractor had “great difficulty” accessing the “unauthorised site . . . not helped by the large number of dogs”. He said the families had used the portaloos incorrectly.

The families had been offered alternative accommodation but had turned it down, he added. “[The council] has been working with the Tipperary Rural Traveller Project [TRTP] and the occupants . . . to try and address [housing] issues, with limited success.”

Jack Griffin, family support worker with the TRTP, said the housing offered to the families was “not acceptable” to them, due to the location in one case. The other case involved “standard social housing which the families do not want”.

About 130km away, in Edenderry, Co Offaly, Lena (46) and Danny (46) O’Brien and their three older children (15, 16 and 21) share a tiny caravan by the side of the Carrick Road. Despite the pandemic, they still have neither running water nor a toilet. They have not seen their younger children (aged six and 13) since the start of the pandemic. Since last year they have lived with relatives elsewhere, on the advice of Tusla, until the family’s housing situation improves.

“We have been here three years,” says Lena. “We have no toilet, nowhere to shower. We do go to a field. We used to go to the swimming pool to shower but that’s closed.”

They collect water from a tap near the canal.

Danny describes as “heartbreaking” that they have not seen two of their children for so long. “We would take a house anywhere, to get our children back.”

A spokesman said Offaly County Council could not comment on an individual case but was “continuing to actively pursue sustainable and appropriate housing solutions for a number of Traveller families”. A “range of services” had been provided, he added, including “standard housing and sanitary facilities”.

In the Carcur area of Wexford, the extended Berry family of 19, including eight children, have just been provided with a cold-water tap and three portaloos after three years. These are being cleaned weekly and are spotless.

We are after putting in two very hard years here with the cold, the muck. I don’t know how we are after surviving

Mary Berry (63) says her husband Patrick (65) “is after having a quadruple bypass and has had two mini-strokes after”.

“He’s very depressed. I myself have high blood pressure, angina. We have no way of showering ourselves. We used to go to other people’s houses, but with this disease now we can’t go,” she says.

“Five weeks ago we got a tap from the council. It’s very, very good of them because I thought I’d never see a sup of water from a tap again. And the three toilets, and a bin for the rubbish. Oh I tell you, it was the very same as winning the lotto. It does make a big difference.

“We are after putting in two very hard years here with the cold, the muck. I don’t know how we are after surviving. I would hope to almighty God that we don’t have to spend another winter here.”

A spokesman for Wexford County Council said alternative accommodation was available to the families “should they wish” during the pandemic and they could return to Carcur afterwards, though it was “not suitable for permanent habitation”.

“Standard housing is not the long-term desired housing solution for the families,” he said, adding that a group housing scheme was planned under the current Traveller Accommodation Programme 2019-2024.

On private land off Old Connaught Avenue in Shankill, Co Dublin, the extended Moorehouse family has been provided with two taps and a portaloo by Dún Laoghaire-Rathdown County Council, after 10 years. Five households, including more than 10 children and an adult with profound hearing impairment, are living on the site.

In the Holyhill area of Cork city, The Irish Times met a family of 11 sharing a three-bed caravan, and a young widow (29) with four young children living with no running water for the past six weeks.

A spokeswoman said Cork City Council could not comment on individual cases but was “continuing to work with families across the city to address their concerns and needs due to Covid-19”.

The Irish Traveller Movement (ITM) has details of numerous cases across the country where Travellers continue to live in dire conditions, despite the March 18th circular.

“Supports have not been comprehensively applied in the nine weeks since the circular was issued,” says ITM director Bernard Joyce. He said the hope remained that the uneven progress would be built on, rather than taken back, after the crisis.

A department spokesman, however, described the services as “temporary arrangements”.

“The department would like to acknowledge local authorities for their swift response in implementing these measures, and the valuable assistance of the national Traveller organisations during this emergency.”

Previous Can a trip to the iconic Monaco Grand Prix cure an F1 cynic?
Next Covid-19 restriction-lifting may speed up if cases keep falling