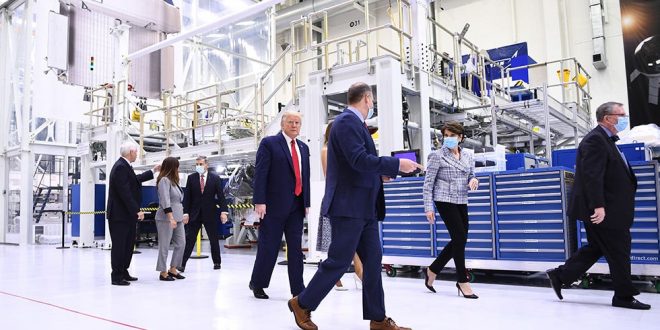 Donald John TrumpJustice says it will recommend Trump veto FISA bill Fauci: Nominating conventions may be able to go on as planned Poll: Biden leads Trump by 11 points nationally MORE’s plans to attend a historic space launch were spoiled Wednesday by bad weather, causing him to return to Washington without giving a planned address as the nation crossed the grim threshold of 100,000 coronavirus deaths.

The launch and Trump’s remarks thereafter would have represented an opportunity for the president to draw on a positive narrative of U.S. advancements under his administration and highlight priorities beyond confronting the coronavirus pandemic.

“This is a very exciting day for our country,” Trump said at a launch briefing less than an hour before SpaceX canceled the launch because of inclement weather. “We have been at this long and hard for three and a half years.”

Instead, Trump left more than an hour before his previously scheduled remarks at the Kennedy Space Center, with plans to return for the expected rescheduled launch on Saturday.

The focus of the media stayed on the mounting death toll, which exceeded 100,000 just before 6 p.m. — shortly before Trump arrived back in the Washington area.

Trump did not speak to reporters upon his return to the White House on Wednesday evening and has yet to address the 100,000 figure specifically.

The coronavirus has dominated headlines and consumed the White House’s energy for three months. The president has endured criticism for downplaying the crisis early on, and his administration has come under fire for testing missteps that cost time in the effort to confront the coronavirus.

Those polls and the criticism have clearly been on Trump’s mind.

He’s traveled to four battlegrounds states in four weeks, and the Florida trip itself was a visit to a key state where polls show a competitive race.

He’s tweeted about the critics, writing Wednesday morning that the “Radical Left Lamestream Media, together with their partner, the Do Nothing Democrats, are trying to spread a new narrative that President Trump was slow in reacting to Covid 19.”

“Wrong, I was very fast, even doing the Ban on China long before anybody thought necessary!” the president wrote, referring to his travel ban on visitors from China.

Charles (Joe) Joseph ScarboroughTrump again tweets about Scarborough conspiracy, despite heavy criticism WSJ editorial board condemns Trump for ‘trash’ Scarborough tweets: ‘Ugly even for him’ The Hill’s Morning Report – Presented by Facebook – Major space launch today; Trump feuds with Twitter MORE when he was representing Florida in Congress nearly two decades ago. The messages have earned Trump public rebuke from members of his own party.

The coronavirus has had a devastating impact on both the public health of the country and its economy. More than 38 million Americans have filed unemployment claims in nine weeks, and Trump’s own advisers expect the unemployment rate to exceed 20 percent, but the White House has expressed optimism that the economy will recover by the end of the year.

Trump throughout the pandemic has cast himself as a wartime president. He has appeared increasingly eager in recent weeks to move past the coronavirus, declaring the worst days over and urging states to reopen so Americans can return to work despite continued questions about the United States’s ability to contain future outbreaks of the virus until there is a vaccine.

Anthony FauciFauci: Nominating conventions may be able to go on as planned The battle of COVID in the ‘quiet war’ on China Dolphins owner: ‘We’re planning to have fans in the stadium’ MORE, a top U.S. infectious disease expert and member of the White House coronavirus task force, said on CNN on Wednesday that a second wave was not inevitable in the fall and that he was feeling “better and better” about the capabilities to sufficiently test and conduct contact tracing.

Fauci also said hydroxychloroquine — a drug touted by Trump — isn’t an effective coronavirus treatment and that officials should “reserve judgment” on whether party conventions should take place in August. Trump this week has signaled his strong desire for the GOP to hold its convention, saying he’s willing to move it from North Carolina if necessary.

The projected death toll has been a point of focus for Trump at times. He acknowledged earlier this month that the death toll could reach 100,000, adjusting up his prior predictions — which were guided by a White House-favored model — that the U.S. could keep the death toll around 60,000.

Still, Trump has repeatedly pointed to figures showing between 1.5 million and 2.2 million Americans would have died without implementing social distancing steps recommended by his White House as evidence he acted quickly and decisively.

“For all of the political hacks out there, if I hadn’t done my job well, & early, we would have lost 1 1/2 to 2 Million People, as opposed to the 100,000 plus that looks like will be the number,” the president tweeted on Tuesday. “That’s 15 to 20 times more than we will lose. I shut down entry from China very early!”

Previous Covid-19: Tax on unemployment payment could be collected by reducing credits
Next Coronavirus unleashing new wave of U.S. layoffs