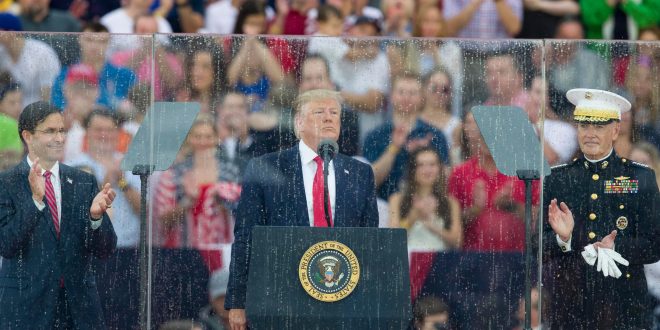 This year’s Independence Day event is somewhat scaled back – there won’t be armored military vehicles on display at the Lincoln Memorial, as happened last year –but the White House still plans to host hundreds of people on the South Lawn for music and fireworks.

Trump also plans to make remarks at the White House a day after a speech in which he took sides in the nation’s culture wars while appearing at Mount Rushmore in South Dakota.

Attacking what he called “a new far left fascism” seeking to tear down statues of leaders who owned slaves or fought for the Confederacy during the Civil War, Trump claimed “our nation is witnessing a merciless campaign to wipe out our history, defame our heroes, erase our values, and indoctrinate our children.”

Trump at Mount Rushmore: Trump accuses protesters who tear down statues of wanting to ‘wipe out our history’ in Fourth of July speech

Political analysts slammed Trump’s use of Mount Rushmore, and Independence Day, as a political props.

The fight against the coronavirus pandemic is a theme of what the White House calls a “Salute to America.” Invited guests include doctors, nurses, and other front-line responders to the COVID-19 crisis, as well as members of the military, law enforcement and their families.

“The American people have shown tremendous courage and spirit, particularly our amazing frontline workers, in the fight against this global pandemic just as our forefathers did in the fight to secure our independence,” the White House said in a statement.

Given the recent spikes in COVID-19 cases, the White House said it will provide face masks and hand sanitizer to guests, and encourage social distancing. Some guests will be on the Ellipse just south of the White House.

The preparations underscore the unnecessary risks of the event, some lawmakers said.

“The President, as he has since February, continues to insist that the virus will simply disappear, and the Administration’s response continues to be guided by wishful thinking,” said Rep. Don Beyer, D-Va., whose district includes suburbs of Washington, D.C.

Beyer, who has accused Trump of again “using the military to stage yet another costly political photo op,” said the president’s approach is “not a strategy for ending a pandemic.”

The COVID-19 threat hit home for Trump and his re-election team as one of its most prominent members contracted the virus. Kimberly Guilfoyle, a campaign surrogate and the girlfriend of Donald Trump Jr., tested positive for the virus, officials announced right before the South Dakota event.

Trump also marked the July 4th holiday by signing an executive order creating what it called “a National Garden of American Heroes.” It didn’t say where or how the garden would be built, or how it might be financed.

What statues Trump wants: Billy Graham, Harriet Tubman and Frederick Douglass among others

In action related to COVID-19, Trump also signed a bill into law extending the deadline for businesses, struggling in the pandemic, to apply for aid under the Paycheck Protection Program (PPP).

Washington, D.C., Mayor Muriel Bowser, who canceled the traditional Fourth of July parade in the nation’s capital, said her office informed Trump’s Interior Department that the event it is planning violates the health guidelines set by the Centers for Disease Control and Prevention.

“We are giving D.C. residents the same message about any of their outings for the holiday weekend,” Bowser told reporters. “Ask yourself, ‘Do you need to be there?'”

The number of new cases in the United States has exceeded 50,000 the past three days, a record, according to a database maintained by Johns Hopkins University. To date, there have been more than 2.8 million COVID-19 cases nationwide, and more than 129,00 deaths.

Still, thousands of people are expected to gather up and down the National Mall to watch fireworks.

The event will also feature music, military demonstrations, and aircraft flyovers, in addition to the annual fireworks extravaganza over the National Mall, the White House said.

Trump celebrates at a fraught time in his presidency. A series of polls show Trump slipping farther behind Democratic challenger Joe Biden in the November election. There are also renewed questions about his friendly relationship Russia President Vladimir Putin, in light of reports that the Russians may have paid bounties to Taliban fighters for killing U.S. troops in Afghanistan.

The American president is also under attack for a shaky response to the COVID-19 pandemic, although he celebrated improving job numbers Thursday.

The South Lawn of the White House won’t be the only place for large gatherings on Independence Day in the nation’s capital.

Civil rights groups are expected to gather near the White House for continuing demonstrations against police brutality and racial discrimination. The protests stem from the May 25 police killing of George Floyd in Minneapolis.

Trump took heat over the scale and expense of last year’s July Fourth event, which wound up costing taxpayers $13 million, according to the Government Accountability Office.

More: ‘This says something’: Thousands gather in Washington for Donald Trump’s 4th of July celebration

On the steps of the Lincoln Memorial, standing behind rain-streaked bulletproof glass, Trump gave a speech paying tribute to all five branches of the military – plus the newly created Space Force

Trump also made one of his most famous gaffes in his last July 4 speech. Saluting the colonial military forces that defeated the British in the American Revolution, Trump said: “Our Army manned the air … it rammed the ramparts, it took over the airports.”

There were no airplanes or airports the late 18th Century. Trump later blamed a teleprompter problem.

Some lawmakers said Trump made last year’s July 4 speech and event too much about himself, and he is doing the same thing this year in the era of COVID-19.

Said Beyer: “It is clear he is willing to put others at risk in order to prop up his own fragile ego.”

During his July 4th speech, President Trump had a few historical inaccuracies.

Previous Pubs reopen in England as Covid-19 restrictions lift
Next What you need to know about COVID-19 in Alberta on Saturday, July 4 | CBC News