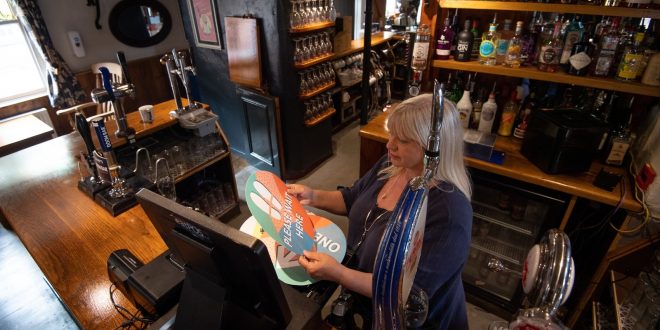 The first pints have been poured at pubs in England, which can now reopen following months of closure as Covid-19 lockdown restrictions are lifted.

Couples can get married and hairdressers have been allowed to welcome customers, alongside restaurants, bars and cinemas on so-called Super Saturday, which has seen the biggest relaxation of rules yet.

Andrew Slawinski, 54, who bought a Guinness, described his first pub pint in three months as “gorgeous”.

“It’s like winning the [Premier] League,” he told the PA news agency.

Chancellor Rishi Sunak has also welcomed the reopening of businesses.

On a visit to The Bell & Crown in Chiswick, west London, he said: “The hospitality sector is a vital part of our economy and crucial to people’s livelihoods.

“Britain’s pubs and bars alone employ almost half a million people, which is why it’s such good news that so many people are able to return to work this weekend, helping us all to enjoy summer safely.”

The pub is run by brewers Fullers, who only plan on opening 27 of their 215 own-managed venues today.

Research suggests they are just some of many who will be keeping the shutters down for now as the industry has called for more support from the government.

Statistics from the Night-Time Industries Association (NTIA) have revealed 31% of bars, pubs and restaurants will stay closed today.

NTIA boss Michael Kill said: “Our members feel stuck in a bizarre tug of war between government, licensing and planning regulators and the police.

“But no-one knows which rope to pull and in which direction, leaving businesses stranded in the middle with no way to move forward and out of this mess.”

Meanwhile, pubs in Wales and Scotland must remain closed until later this month as the devolved nations are lifting their own lockdown rules more slowly, but hotels, bars, restaurants and cafes in Northern Ireland reopened yesterday.

Ministers have urged the public not to get carried away with the new freedoms.

British Health Secretary Matt Hancock told the Daily Mail that people were entitled to enjoy themselves at pubs but added: “You could end up behind bars if you break the law.”

He also said he would not “shirk” from shutting pubs and restaurants again, and imposing local lockdowns if needed.

He said: “I’m no killjoy, but the virus can still kill. I don’t want to see bars and pubs have to close again. I love going to the pub and enjoy a pint or two.”

The new relaxed rules on social distancing means some couples are finally able to say “I do”.

Care home worker Jennifer Wilson and security guard Louise Arnold, both 22, married at the Peace Garden Pergola in the grounds of Runcorn Town Hall, Cheshire, in what was thought to be the first wedding after the updated Covid-19 guidelines came into force.

Ms Wilson said: “Last week the registry office rang and asked if we wanted to be the first couple in the UK to marry after lockdown, and we just said yes.

“We both work nights normally, so the time suited us.”

Ms Arnold, who works for lorry firm Eddie Stobart, added: “With it having just been Pride month, this felt like something we couldn’t really pass up. Not just for us but for other LGBT people who haven’t been able to get together to celebrate Pride.”