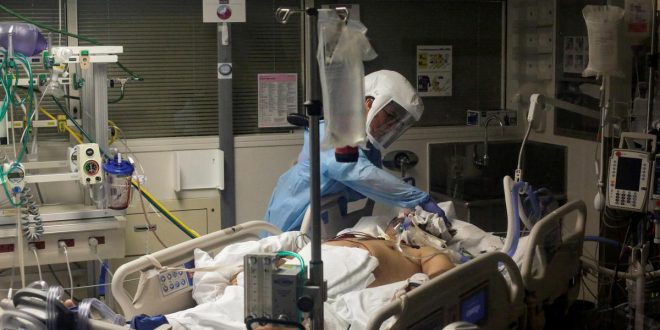 Those gains, however, could be short term, depending on how quickly the coronavirus outbreak subsides and healthcare business begins to return to something close to normal.

UnitedHealth Group Inc, the largest U.S. health insurer, last week posted first-quarter earnings above Wall Street expectations and kept its profit forecast in place for 2020, despite an economy battered by massive layoffs and business shutdowns to slow the spread of the virus.

“The costs from COVID-19 are going to be actually very small and more than outweighed by the deferral of elective procedures. The net impact is going to be positive for them,” said Jeff Jonas, portfolio manager with Gabelli Funds.

The new coronavirus has infected more than 875,000 in the United States and killed more than 50,000, according to Reuters tally. As of the middle of last week, about 150,000 people had been hospitalized, almost half of which were in New York, and more than 45,000 required intensive care, Evercore ISI analyst Michael Newshel said.

While extended hospital stays, particularly in intensive care units, can rack up massive bills for individuals, that pales compared to the savings from millions of Americans delaying care. Those savings also outpace the costs to insurers of waiving COVID-19 related co-pays, deductibles, tests and other care, which most insurers have agreed to waive.

Most of the country has been under stay-at-home orders, and many non-emergency care visits and elective procedures have been canceled to help hospitals manage the surge of coronavirus patients.

The largest U.S. for-profit hospital operator, HCA Healthcare Inc, said it has seen a 70% drop in outpatient surgeries so far in April compared with a year ago, while inpatient admissions declined 30%.

Federal authorities have said hospitals could resume more routine care as appropriate, as states begin to ease some social-distancing measures.

It is unclear how quickly that will happen. Much depends on how well contained the coronavirus outbreak is in a specific city or state. Hospitals will also need increased access to coronavirus testing and take additional precautions to help prevent transmission between staff and patients.

In addition, as more than 26 million Americans have lost their jobs, some will also lose their health insurance or move to government insurance programs such as Medicaid or Obamacare plans, created by the Affordable Care Act (ACA).

Some expect a gradual return of patients for conditions other than COVID-19 and treatments delayed by the public health emergency. UnitedHealth warned last week that medical costs would likely increase in the second half of the year.

Health plans and employers who provide insurance have seen an overall decline in healthcare use of about 30% to 40% excluding COVID-19 patients, according to Tim Nimmer, the global chief actuary at Aon, a benefits company that advises large corporations and health plans.

“For each month that this goes on, we are expecting about 1.5% to 2% in annual costs to be reduced,” Nimmer said. “The number one issue is how long will this go on.”

Right now, that drop is outweighing the costs of patients with COVID-19, Nimmer said. Companies with younger, healthy employees are experiencing even less spending.

Some healthcare appointments that are canceled because of the pandemic will not return because people will decide not to have surgery, or will not need a sick visit, Nimmer said.

Health insurers could largely benefit this year from a more gradual resumption of discretionary and elective care, analysts agreed.

“It is unlikely that we will see healthcare volumes fully rebound or even close to fully rebound in the back half of the year relative to pre-crisis levels,” said Stephens analyst Scott Fidel. That should continue to help UnitedHealth and other insurers possibly into the fourth quarter, he said.

The gains, however, are likely short term. A wider economic collapse may push Americans into health plans that can be less profitable for insurers.

Florida Blue, part of the Blue Cross Blue Shield network, said it has seen a toll on people employed by small businesses hit hard by mandatory closures that prompted worker furloughs and layoffs. That has led people to move into its ACA government subsidized health plans in Florida.

“There’s probably twice as much enrollment as we would have anticipated in the ACA,” said Chief Executive Pat Geraghty, largely because they have lost coverage elsewhere.

Centene Corp and Molina Healthcare Inc, which focus on Medicaid, are best positioned for a declining economy as people make the switch, he said. Gabelli’s Jonas favors Centene in particular.

“They are probably going to gain a lot of membership in a recession given all the layoffs and job losses,” he said.

Previous Trump tells advisers U.S. should pull troops as Afghanistan COVID-19 outbreak looms
Next Why landlords must help save Target

Florida set another grim record Tuesday with nearly 200 more COVID-19 deaths recorded overnight, but in recent days an ominous sight outside a funeral home has been sending a shiver through a Miami-area town –- a refrigerated trailer for storing bodies.Rumors that the corpses of coronavirus victims were being stored there -- and unfounded fears…