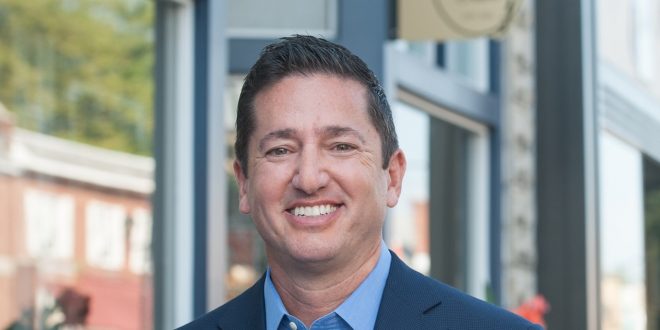 Republican David Richter, who recently moved from Princeton to Avalon so he could run for Congress in New Jersey’s 2nd District, has decided to run in the 3rd District instead, thereby avoiding a primary against Democrat-turned-Republican Rep. Jeff Van Drew.

“I’ve made my decision. I am going to step aside from the 2nd District race,” Richter, the former CEO of the construction consulting firm Hill International, said in a phone interview, adding that he is endorsing Van Drew.

Richter, 53, will have a tough fight in the Republican primary against already-declared candidate Kate Gibbs, a former Burlington County freeholder who says she won’t drop her candidacy, even if some party leaders pressure her to do so.

In a statement, Gibbs derided Richter as a “seat shopper who apparently believes he’s entitled to party support — somewhere, anywhere.”

The 3rd District, which includes parts of Burlington and Ocean counties, is represented by freshman Democrat Andy Kim, whom Republicans consider vulnerable in November.

GOP leaders have been in discussions with Richter about potentially moving to the 3rd District to help clear the path for Van Drew to win the Republican nomination. Van Drew switched parties last month amid collapsing Democratic support over his refusal to back impeaching President Donald Trump.

Richter, who has loaned his campaign hundreds of thousands of dollars, had been the frontrunner for the GOP nomination in the 2nd District to take on Van Drew as a Democrat before he switched parties. But Trump’s endorsement of Van Drew and party leaders’ subsequent embrace of him has diminished Richter’s chances at winning in the district.

“I ran because I wanted to have the opportunity to take a traditionally Republican seat that had gone blue in the last election and make it Republican again. That already happened. Jeff Van Drew has become a Republican with the full support of the president, and I want to support the president,” Richter said in a phone interview. “Instead, I’m going to jump into the 3rd District race where I think Andy Kim has some real problems getting reelected.”

Some Republicans in the state have been alarmed at the prospect of pressuring the 33-year-old Gibbs to drop her campaign in favor of a wealthy male candidate who grew up partly in the 3rd District, but hasn’t lived there for years.

“Anyone who thinks they can push me around doesn’t know anything about South Jersey women,” Gibbs, the deputy director of Engineers Labor-Employer Cooperative Local 825, said in a statement. “I was raised by a single mom who taught me how to stand up for myself and never back down from a challenge. To our party leaders who like to talk about empowering and supporting young Republican women to run and serve, well, here I am. The ball is in your court.”

Five Republican women who run organizations with missions to increase the number of elected women in New Jersey urged the party to stick with Gibbs and said they would help her raise money.

“The historic lack of support for women seeking office at all levels has resulted in a lack of diversity among Republican candidates and officeholders in the party,” former state Sen. Diane Allen, along with Kathy Hugin, Laura Overdeck, Candy Straight and Stacy Schuster, said in a statement. ”Fortunately, we’re beginning to see a reversal of that trend. That’s why we were thrilled to see Kate Gibbs step up to run for Congress this year.”

Richter had lived in Princeton, which is in the solidly Democratic 12th Congressional District, for years before he moved 120 miles south to Avalon in October, to run in the 2nd District. But Richter stressed that he grew up in Willingboro, which is in the 3rd District, and Cherry Hill, which was before the last redistricting in 2011.

Gibbs already has the backing of the Burlington County GOP. Richter indicated he will seek support from the Republican Party in Ocean County, which makes up roughly half the district. Richter said he and his family plan to move to the Ocean County portion of the district.

“I’ve spoken with Republican leaders from Ocean County, and, frankly, if they were ready to get behind Kate Gibbs, there wouldn’t be an opportunity for me to get in this race at all,” he said.

It’s not clear if Trump will weigh in on Richter’s candidacy, but Bill Stepien — who was the White House political director and helped engineer the Van Drew party switch — has signed on to Richter’s campaign as an adviser. Trump is scheduled to appear at a rally in Wildwood on Tuesday in support of Van Drew.

Richter is the second Republican candidate this month to announce a district switch. Rosemary Becchi, a tax attorney and lobbyist who had been seeking the GOP nomination in the 7th District against Tom Kean Jr. to challenge Democratic freshman Rep. Tom Malinowski, recently announced she will instead run in the 11th District, where she’s expected to have a clear path to challenge freshman Democratic U.S. Rep. Mikie Sherrill.

Previous In 5-4 ruling, Supreme Court allows Trump plan to deny green cards to those who may need gov’t aid
Next The Grammys Can’t Go On Like This