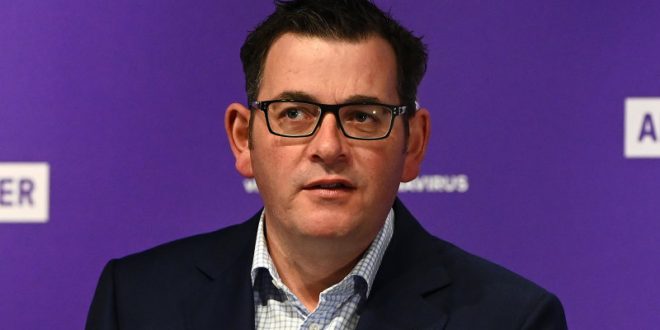 “There’s often 10 per cent to 20 per cent of all coronavirus infections who require hospitalisation, so that’s a couple of hundred individuals at least.”

Of Victoria’s 26 intensive care patients, 21 are on ventilators.

Professor Sutton said elevating Melbourne and Mitchell Shire to stage four restrictions – stricter than Victoria has experienced so far in the pandemic – remained an option if case numbers didn’t decrease, though he refused to reveal details on what stage four may include.

“[Tuesday] is not as high as our biggest single day [of 288 last Friday], but we haven’t turned the corner yet,” Professor Sutton said.

“I hope to see that this week, but there are no guarantees. Again, we have to rely on everyone doing the right thing in order to drive numbers down.”

The Premier said he had asked Prime Minister Scott Morrison to continue to divert international flights away from Melbourne indefinitely, meaning the troubled hotel quarantine system will be suspended in Victoria from Thursday.

“We’ve just got to be completely and utterly focused on contact tracing, testing, and then making sure we’ve got the appropriate public health response for every single positive case.”

Chief Health Officer Brett Sutton on Monday revealed that all of Victoria’s active COVID-19 cases could possibly be traced back to breaches at quarantine hotels.

As The Age and The Sydney Morning Herald reported today, top Victorian bureaucrats warned health officials on the first day of the hotel quarantine scheme in late March that private guards were ill-equipped and police should be called in to oversee the operation.

Mr Andrews deflected questions on what government officials knew about hotel mismanagement, saying it was a matter for a judicial inquiry by retired judge Jennifer Coate that will begin on Monday and finish in late September.

“Those matters – who was in charge, how that worked, decisions that were made, all of those issues – are, rightly, the province of retired judge Coate,” Mr Andrews said.

“I’m not criticising you for asking the question. I’m just pointing out thatit’s very challenging to provide a commentary. That’s not the right thing to do.”

Mr Andrews said 28 of Tuesday’s new cases are connected to known outbreaks and 242 remain under investigation.

The new Victorian cases bring the nation’s total number recorded since the beginning of the outbreak to over 10,000.

Tuesday is the ninth day in a row that Victoria has recorded a triple-digit increase and comes after almost 22,000 tests were conducted on Monday.

There are multiple aged care outbreaks in Victoria, including 28 cases at Menarock aged care facility in Essendon.

Professor Sutton said many were outbreaks were one or two staff at a facility, though some residents were being removed from facilities that health officials deemed sites with a high risk of transmission.

Australia recorded its first case on January 25, in a man from Wuhan who flew into Melbourne from Guandong on January 19.

About 1000 members will bolster Victoria’s resources in the next three to four weeks, adding to about 4000 members already helping the state’s effort.

Many Victorian ambulances will now be staffed by one ADF member together with one Ambulance Victoria paramedic.

Mr Andrews said this was in anticipation of scores of paramedics being sent into self-isolation after contact with confirmed cases.

ADF members will also bolster their existing presence in the state control centre and at testing sites, as well as helping Victoria Police check that residents in Melbourne and Mitchell Shire are adhering to stage three lockdown restrictions.

Get our Coronavirus Update newsletter for the day’s crucial developments. Sign up to The Sydney Morning Herald’s newsletter here and The Age’s here.

Previous NRL considers moving entire competition to Queensland as COVID-19 crisis escalates
Next Ontario is entering Stage 3, U.S. states are locking down again: 4 charts that pinpoint where we are in COVID-19 battle