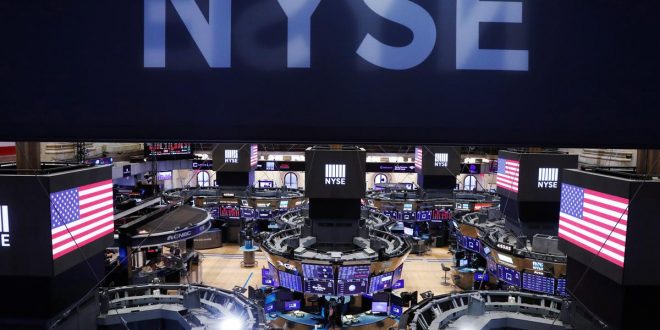 (Reuters) – U.S. stocks jumped to seven-week highs on Wednesday as Gilead Sciences gave an encouraging update on a potential COVID-19 treatment and upbeat earnings from Google-parent Alphabet boosted shares of other technology and internet giants.

Gilead (GILD.O) rose 5% after the drugmaker said its experimental antiviral drug remdesivir helped improve symptoms for COVID-19 patients who were given the drug early.

“Optimism is growing that remdesivir will get fast track approval, but traders need to exercise some caution as it has yet to be proven safe nor effective in treating COVID-19,” said Edward Moya, senior market analyst at OANDA in New York.

The three main indexes have recovered over 30% from their mid-March lows, boosted by aggressive stimulus efforts and, more recently, on hopes of an economic revival as many U.S. states begin to relax lockdown measures.

Boeing Co (BA.N) shares climbed 8% after the planemaker said it would cut its workforce by about 10%, further reduce 787 Dreamliner production and try to boost liquidity.

All eyes will be on the policy statement by the Federal Reserve at the end of its two-day meeting at 2 p.m. EDT (1800 GMT).

“They are going to be broadly supportive of the markets, the economy and signal a continuing commitment to further ramp up interventions if necessary, to support the recovery,” said Tony Roth, chief investment officer at Wilmington Trust in Wilmington, Delaware.

Analysts foresee a sharper decline in second-quarter earnings, with profits for S&P 500 companies expected to record a 36% decline following a 15% anticipated drop in the first quarter, according to Refinitiv data.

Investors shrugged off data that showed the U.S. economy contracted in the first quarter at its sharpest pace since the Great Recession, ending the longest expansion in history.

“The economic data is backward-looking and markets will continue to be forward-looking,” said Chris Zaccarelli, chief investment officer at Independent Advisor Alliance in Charlotte, NC.

Markets are trying to anticipate a resumption of economic activity in the short run and a vaccine in the medium term, he said.

The mood by midday was risk-on, with only defensive plays like the consumer staples .SPLRCS and utilities .SPLRCU sub-sectors trading lower.

General Electric Co (GE.N) fell 2% after its industrial businesses took a $1 billion hit to cash flow in the first quarter and it warned the damage would be worse in the next.