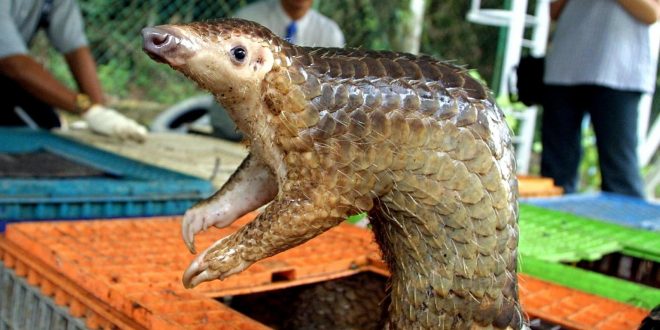 Was the pangolin the source of the Covid-19 outbreak?

An insightful documentary shown on RTÉ Two on Sunday night highlighted the plight of the pangolin, a shy, scaly animal found in Asia and Sub-Saharan Africa, which has the unfortunate title of the world’s most trafficked mammal.

A 2016 report by animal charity, WildAid, estimated that one million pangolins were taken from the wild in the preceding decade. The nocturnal, solitary creature is often compared to a scaly anteater. It has no teeth and survives on a diet of insects it consumes with the aid of its extremely long tongue.

Pangolin meat is considered a delicacy in parts of Africa, China and Vietnam and their scales are used as a traditional medicine in Asia. To add to the animal’s woes, it’s now being blamed as a possible source of the coronavirus pandemic.

Since the coronavirus began to take hold in China early this year, scientists have been scrambling to find its origin, believed to have been a food market in Wuhan.

As bats are traditionally associated with coronaviruses (such as SARS), it was widely assumed that this novel coronavirus also originated in bats.

In fact, bats are reservoirs for hundreds of coronaviruses. Part of the reason for this is that, as the only flying mammals, bats have developed a rare ability to fight viruses, and consequently live with various types of diseases.

Analyses of the genetic code of the novel coronavirus, known as SARS-CoV-2, backed up the theory that the virus originated in bats.

Since other coronaviruses have transmitted to humans from bats via an intermediary animal, it’s now assumed that’s the case here too. Several possible culprits have emerged, including the aforementioned pangolin, but scientists haven’t reached consensus on the matter.

Researchers in Hong Kong and China claim to have found viruses in the scaly mammals, which are closely related to the one responsible for the Covid-19 outbreak.

The team analysed samples taken from more than 30 Malayan pangolins seized during anti-smuggling operations between August 2017 and January 2019.

They detected two groups of coronaviruses related to the new virus behind the human pandemic in some of the animals smuggled into China. But the researchers said the role of pangolins as the intermediate host of the disease remains to be confirmed.

However, a paper published in the journal Nature, said the findings suggest handling pangolins “requires considerable caution” and that the sale of these animals in wet markets “should be strictly prohibited”.

It added further surveillance is needed to understand the role of the animals in the emergence of coronaviruses. Outside of bats, pangolins are the only mammals reported to date that have been found to be infected with a coronavirus related to Sars-Cov-2.

The researchers said their findings highlight “a potentially important role” for the animals in the ecology of coronaviruses.

They wrote: “The discovery of multiple lineages of pangolin coronavirus and their similarity to Sars-CoV-2 suggests that pangolins should be considered as possible hosts in the emergence of novel coronaviruses and should be removed from wet markets to prevent zoonotic transmission.”

In what could be seen as a boost to the endangered animal, China declared an immediate and “comprehensive” ban on the trade and consumption of wild animals in February.

Beijing implemented similar measures following the SARS outbreak in the early 2000s, but the trade and consumption of wild animals, including bats and snakes, made a comeback.

This time the ban is permanent, raising hopes that it could end the local trade in wildlife.

“I do think the government has seen the toll it takes on national economy and society is much bigger than the benefit that wild-eating business brings,” said Jeff He, China director at the International Fund for Animal Welfare.

Reports linking the virus to the pangolin have also scared off would-be consumers of the scaly mammals elsewhere, with bushmeat vendors in Gabon reporting a plunge in sales.