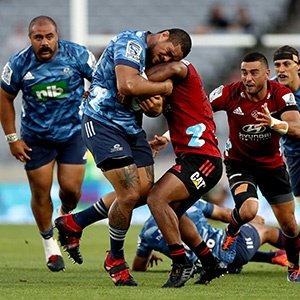 New Zealand’s top rugby players will share homemade videos on how they are coping during Covid-19 lockdown and keeping fit in a new show airing on Wednesday called “Isolation Nation”.

With the Super Rugby season in limbo, pay-TV broadcaster Sky Sport is desperate to provide fresh content for subscribers and worked on the concept with New Zealand Rugby and the players’ association.

The programme, co-hosted by former All Black Israel Dagg, features gags, inspiring stories and fitness tips from players, who are in the midst of New Zealand’s four-week lockdown.

“We’ve all seen how talented these players are on the field and now we will get to see what makes them tick off it,” he said.

“Like everyone else in Aotearoa (New Zealand) they are keen to stay fit, healthy and motivated to get back in action as soon as we have Covid-19 licked, and they’re letting us in on how they are trying to do it.”

While the programme gives Sky Sport an alternative to endless reruns of old matches, those involved said it was also a way to lift spirits and stay connected to fans.

“(It’s) trying to keep a fair amount of normality to this isolation period,” said All Blacks fly-half Beauden Barrett, who appears in the first show drop-kicking a rugby ball from his balcony into a distant basketball hoop.

Broadcast rights to Super Rugby and All Blacks internationals were the jewel in the crown for Sky Network Television, which signed a lucrative deal last year to retain them until 2025.

But shares in Sky – which is not linked to the European media group of the same name – have halved to 28 NZ cents this month as the prospect of matches in the near to medium term looks increasingly remote.

Previous Govt searches for MSC Orchestra holidaymakers after 2 Covid-19 cases
Next Was the pangolin the source of the Covid-19 outbreak?