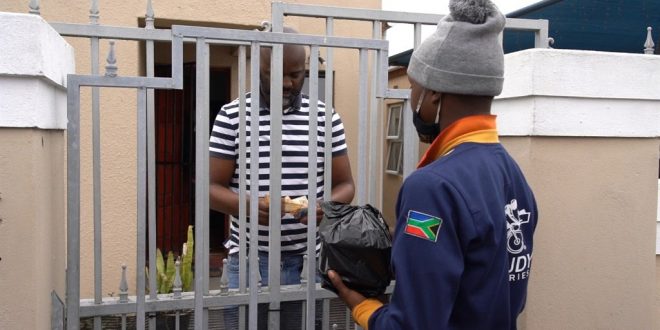 Fourth-year law student Colin Mkosi wanted to make life easier for the people in his community and so he decided to start the first local door-to-door delivery service in Langa, Cape Town.

Cloudy Deliveries started operating in February this year, just in time for the national Covid-19 lockdown, and offers a South African take on “Uber Eats” with local young men delivering groceries and takeouts on bicycles.

Mkosi said, like him, his fleet of 11 high school boys were “big dreamers”.

“These boys have been committed since the first day. They love what they are doing and what fascinates them the most and makes them committed, it’s not the money that they earn, but that they’re able to grow and they’re fascinated by what we could become,” Mkosi told News24.

Mkosi, along with his team, spent a few weeks saving up their earnings so they could invest in uniforms.

“Branding is very important in every business so we decided to save up money. Three weeks the boys didn’t get paid but they were committed to having uniforms,” he said.

Cloudy Deliveries teamed up with local restaurant Jordan Ways of Cooking to assist them with their takeout deliveries.

“We’d been talking about it for some time and then, after the coronavirus started, and then that’s when we started using Cloudy,” said Ntlalo Jordan, owner of the popular restaurant.

He said Cloudy Deliveries had been “a great addition to Langa” and that his business had managed to keep its doors open thanks to their service.

“We adapted to the situation because if we didn’t adapt we were never going to survive. With them, they added value to the business and I think that is how we survived so far,” Jordan said.

Previous Disaster looms for indigenous Amazon tribes as COVID-19 cases multiply
Next Anti-racism protests to go ahead in Offaly, Longford