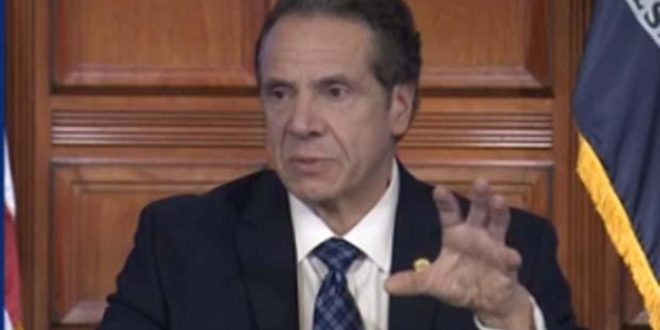 The coronavirus death toll in New York state climbed to 1,550 on Tuesday, up more than 300 from the day before, Governor Andrew Cuomo announced at a briefing. He said more than 75,000 cases have been confirmed in the state, which is the U.S. epicenter of the virus outbreak.

The number of cases are expected to continue to climb in New York for about at least two more weeks, until the state hits a peak in infections, he said.

“We’re still going up the mountain,” Cuomo said. “The main battle is on the top of the mountain.”

The USNS Comfort, a Navy Hospital ship with 1,000 beds and 1,200 medical personnel, arrived in New York on Monday to help handle an expected overflow of patients. Several temporary hospitals are going up in the state.

Cuomo has made an urgent plea for health care workers.

“If you don’t have a health care crisis within your community, please come help us now,” he said Monday. “Today it’s New York, tomorrow it will be somewhere else. This is the time for us to help one another.”

Cuomo on his brother testing positive

Andrew Cuomo’s brother, CNN anchor Chris Cuomo, announced Tuesday that he has tested positive for the virus. “I have been exposed to people in recent days who have subsequently tested positive and I had fever, chills and shortness of breath. I just hope I didn’t give it to the kids and Cristina. That would make me feel worse than this illness!” he wrote on Twitter, referring to his wife, Cristina Greeven Cuomo.

Andrew Cuomo said Tuesday his brother is “going to be fine.” “He is young, in good shape, strong – not as strong as he thinks, but he will be fine,” the governor said.

He also said, “There’s a lesson in this.”

According to Andrew Cuomo, his elderly mother, Matilda Cuomo, was at his brother’s house two weeks ago. “I said ‘that is a mistake,'” the governor said, adding that the incident is when he came up with the idea for “Matilda’s Law,” part of his executive order to help protect seniors, immune-compromised people and those with underlying illness.

“Love is sometimes … needs to be a little smarter than just reactive,” Andrew Cuomo said.

He urged people to remember who is vulnerable and protect them.