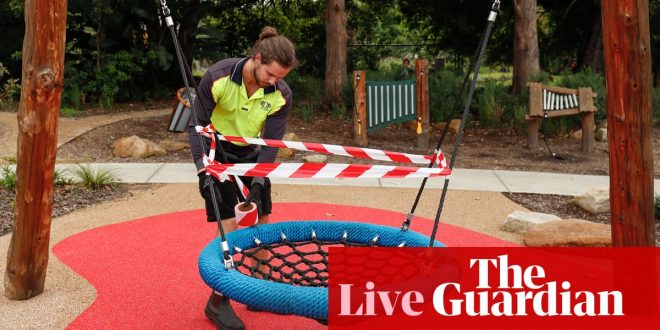 10% of Australia’s cases are from Ruby Princess

My colleague Naaman Zhou has this story tracking the number of coronavirus cases from the Ruby Princess cruise ship.

You should read the story, but this paragraph is damning:

There are now more cases of Covid-19 from the Ruby Princess outside NSW than within the state.

The Northern Territory’s health service wants to minimise the number of people visiting its hospitals.


It’s important to remember if you do have an emergency, or need to access the hospital services, please do so.

We are, however, asking those who have non-emergency health issues to see their GP as soon as they become sick to try to avoid becoming unwell. This helps our hospitals care for those who most need a hospital bed during this time.

If you have an appointment at the hospital and you do not need a carer, please come alone.

Hospitals have established a screening process for those attending and have introduced restricted visiting hours to minimise the risk of transmission of Covid-19 to patients. Exemptions will apply in special circumstances, such as palliative care, maternity and paediatrics.

The health department asked that people who were unwell with cold- or flu-type symptoms, had health problems or were elderly reconsider their need to visit.

The WA government is also introducing emergency laws in parliament on Tuesday.

Anyone who refuses to comply with self-isolation directions could be forced to wear an electronic device or have one installed in their home.

Those who continue to flout the directions, or remove or interfere with the device without a reasonable excuse, face a $12,000 fine or 12 months’ jail.

The legislation will also introduce $1,000 on-the-spot fines for people and $5,000 fines for businesses that disobey self-isolation and gathering directives.

Under another bill, anyone who knowingly has or says they have coronavirus and attacks a public officer will face up to 10 years’ jail, and seven years for threats or other harm.

The new laws will be used only during the state of emergency and will be withdrawn after one year.

The WA premier, Mark McGowan, described the cruise ship crisis as a “nightmare” and “extremely stressful”.

The Artania is scheduled to leave Fremantle on Wednesday with almost 500 crew.

About 200 WA travellers from the Vasco da Gama liner are in quarantine at Rottnest Island, and hundreds of Australians are quarantining at a CBD hotel, along with about 270 people who arrived on Monday on board a Qatar Airways flight.

Hundreds of others have been able to fly home.

About 20 at-risk homeless people are moving into a five-star hotel under a trial program aimed at protecting them and the community from the spread of coronavirus, but the national suicide prevention and trauma recovery project has said it is inadequate.

The ban on intrastate travel comes into effect at midnight, with offenders facing fines of up to $50,000, but there will be exceptions such as for work and medical appointments.

‘When the storm hits, WA will be ready’

AAP has an update from Western Australia.

Seven people who were infected with coronavirus while onboard the cruise ship Artania are in intensive care at Perth hospitals, taking the total in Western Australia to 12.

Four people from the Artania are at Fiona Stanley hospital, while three are at a private facility at Joondalup health campus, which is also treating dozens of other stable patients from the German liner.

Two other passengers from the cruise ship Ruby Princess are also in intensive care.

“They are continuing to struggle with their illness and we hope that they get better,” the WA health minister, Roger Cook, said.

There are 54 people battling Covid-19 in WA hospitals.

Cook said the state government had ordered $15m worth of clinical equipment including 301 ventilators, 201 humidifiers and 200 ICU beds.

“We are sailing into this storm, not out of it. But when the storm hits, we’ll be ready for it,” he said.

The Law Society of NSW appreciates the extraordinary circumstances facing the NSW government, in particular in relation to the number of infections in Sydney.

Clearly there are some extraordinary measures in the latest public health order that would be inappropriate in the ordinary course of events.

We will continue to work with the NSW government to ensure that these extraordinary powers are used sensibly, only where absolutely necessary to protect public health, and in a way that is consistent with the continued operation of the rule of law.

It goes without saying that we all need to continue to be vigilant in observing social distancing measures to stem the spread of this virus.

Thanks to Amy for her excellent work – as usual. I’ll be with you into the evening.

If you want to get in touch with a tip or some feedback, send me an email at luke.henriques-gomes@theguardian.com or a message on Twitter (@lukehgomes).

While things are a little quieter today on the coronavirus front, I am going to duck out a little earlier than usual and leave you with Luke Henriques-Gomes for the afternoon.

The G20 finance ministers and central banks will hold a teleconference meeting tonight to discuss the global economy, keeping supply chains open, and help for developing nations. Australia will be expected to step up for the Pacific.

National cabinet was held yesterday instead of tonight, so the next meeting is scheduled for Friday. Rental relief remains on that agenda.

Thank you very much for your company today. We truly appreciate it. I’ll be back early tomorrow morning. Please, take care of you.

There has been a lot of bitsy information today, so to recap:

Australia’s Covid-19 death toll has risen by one, with the death of a woman in her 80s in Tasmania.

Australia now has 4,359 cases of coronavirus; 50 people are in the ICU; 20 people are on ventilators.

There are beginning signs of possible community transmission in Bondi, with a mobile testing unit potentially being set up.

Almost 200,000 businesses have registered for the $130bn jobkeeper wage subsidy in less than 24 hours.

The government has agreed to a $1.4bn underwriting of private hospitals in Australia, as part of a public-private health partnership, aimed at increasing Australia’s ICU and ventilator capacity.

NSW and Victoria have announced a strict enforcement regime of physical distance and gathering restrictions.

Virgin Australia is hoping for a $1.4bn bailout from the government. Qantas reportedly wants a $4.2bn loan

This, too, is an important story, as regional and remote areas struggle to plan for what could be coming for their communities.

A lot more dignified for people than what we saw outside Centrelink offices last week.