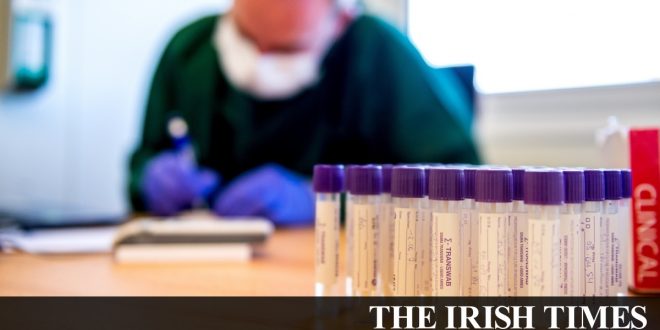 Coronavirus test backlog: How did it emerge and can it be controlled?

Widespread testing for coronavirus is among the key pillars of the Government’s plan to slow the spread of the pandemic in Ireland.

With a backlog of 40,000 people awaiting a test, to succeed, the State’s success hinges on a plan to ramp up the testing capacity to 15,000 a day in the coming weeks – roughly an entire seven-month flu season’s worth of testing – every day, for months on end.

How did the backlog emerge?

Ireland’s current strategy – “community testing” of those with symptoms – is designed to build a picture of where and how the disease is developing but, most importantly, to isolate confirmed cases and those with whom they have been in touch.

It is worth noting that Ireland’s testing figures compare relatively well to other European countries. According to ourworldindata.com, Ireland’s rate of 1,350 tests per million lags Austria and Germany, but is comfortably ahead of the UK and France, for example. It is some way off South Korea, considered among the best testing regimes.

This strategy, though, has placed unprecedented pressure on Ireland’s virus testing system.

During a normal flu season, the National Virus Reference Laboratory (NVRL) might carry out 600 tests a week. Now, with the assistance of the other laboratories, 1,500-2,000 test results are produced a day, according to its director, Cillian De Gascun, who is also chairman of the HSE’s coronavirus expert advisory group. The plan is to increase that about 10-fold in the next four-five weeks.

Can the backlog be controlled?

Much depends on how effective Ireland is at ramping up its capacity. Already, some 41 “community sampling centres” – often mislabelled as test centres – have been set up. The most high profile of these are at stadiums like Croke Park, Páirc uí Caoimh, and next to the LE Samuel Beckett in Dublin’s docklands.

The swabs taken at these centres are, generally speaking, sent to the NVRL. More than 10 hospital laboratories have been equipped to analyse tests around the country, but Dr De Gascun says the primary focus for these centres is on their own patients and staff.

“Broadly speaking, the hospitals are testing their own patients and their own healthcare workers, and then the NVRL is moving into community testing.”

This is in keeping with a wider strategy of providing access for those most in need – the sickest, and those whose participation in frontline efforts to fight the virus will be suspended while they await results of a test.

Meanwhile, community testing – the swabs being taken around the country – will be largely sent to the NVRL, which is working with the Department of Agriculture, Food and Marine to identify additional lab space and is, according to Dr De Gascun, aiming for “almost a factory-style high throughput model of testing in the coming weeks”.

The aim is also to vary the method of laboratory testing done at each centre, so the system doesn’t become overdependent on one type of kit. This is important, as equipment shortages have slowed efforts in recent days.

“We’re in a pinch-point now where we have the labs, we have a certain amount of equipment, we have the staff, but we’re also waiting on the assays [a key piece of equipment] to come in and be available in a sustainable fashion,” says Dr De Gascun.

The expectation is a glut of commercial kits will come onto the market in two-three weeks, enabling the further ramping up of testing. In the meantime, the list of those waiting to be tested, and those awaiting results, is unlikely to shrink. About 4,500 swabs can be gathered a day, but only 1,500-2,000 test results come from the labs, due to kit shortages. Forcing that backlog down can be achieved only by ramping up capacity.

Should I be worried?

There is an emotional toll on those waiting. However, it is worth remembering that for those well enough to remain out of hospital while awaiting their results, the outcome is largely academic. They are being asked to behave as though they have the disease, and self-isolate for 14 days. Unless their condition deteriorates, this is their treatment, with or without a test.

Meanwhile, those awaiting tests are advised to make detailed lists of recent contacts while the information is fresh in their minds. Mitigating the impact of the delays on the public health strategy by self-isolating and helping the contact tracing process is the most helpful thing individuals can do.