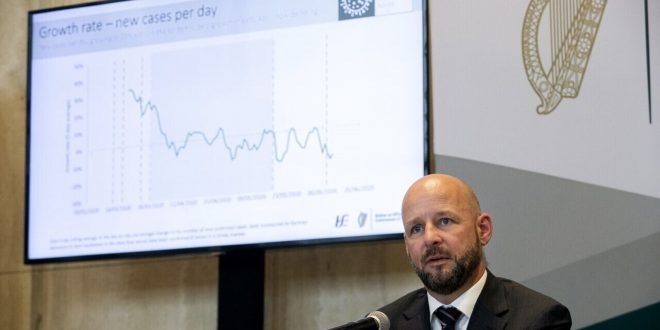 The Department of Health has announced that a further five people who had been diagnosed with Covid-19 have died.

The total number of coronavirus-related deaths in Ireland now stands at 1,738.

There have been 15 additional confirmed cases, bringing the total number of cases to 25,489.

The situation with Covid-19 in this country is currently “stable”, according to Professor Philip Nolan, chair of the National Public Health Emergency Team Irish Epidemiological Modelling Advisory Group.

He said the reproductive number of the virus is “estimated to be closer to 1 than it has been in recent weeks”.

The ‘R’ number has increased from a low of 0.5 to a high of almost 1. But he said it could be a transient rise and health officials “will wait over the next few days to see if it stabilises”. 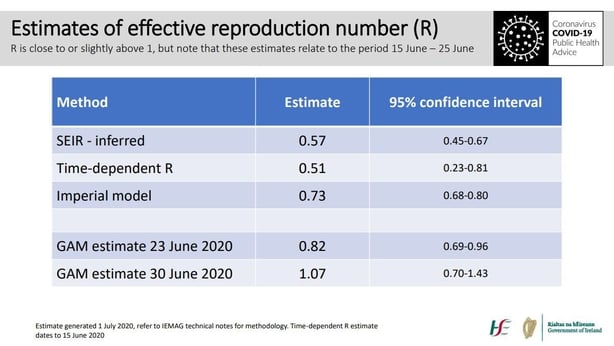 Prof Nolan emphasised the “very low” levels of disease in the wider population, with a low number of new cases and cases in hospital and intensive care.

The five-day average from yesterday is slightly higher than the previous period, with 13 cases compared to nine last week.

However, he said: “We’ve seen this before” adding that it may be “a transient short event.”

Prof Nolan said the number of travel-related cases is increasing again, which he described as a cause for concern. 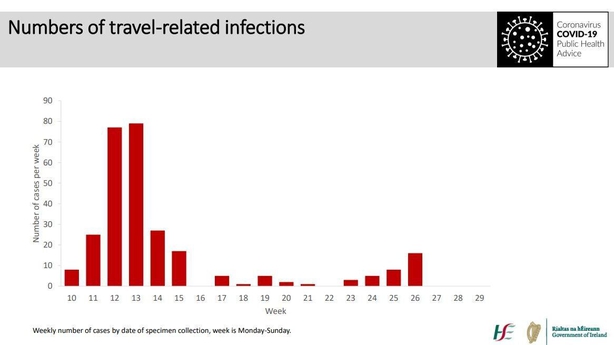 19% of cases last week were related to travel. Less than half were acquired internationally.

Chief Medical Officer Dr Tony Holohan said the travel situation is an evolving one and the Government will “figure out” guidance on travel.

He said that travel could continue between countries but “we will be very cautious about this”.

“We see travel-related cases making up an increasing number of cases. From a public health point of view, the only responsible thing we can do is to express caution.”

A cautious approach informed by evidence and science would allow people to take an informed decision, Dr Holohan added.

Chief Medical Officer Dr Tony Holohan announces that a further five people with Covid-19 have died, while another 15 cases have been confirmed | More: https://t.co/SQ95kbld9g pic.twitter.com/tRB8COnkSo

Dr Holohan said the nature of the situation means that a list of countries “below a certain threshold” will be different week on week.

Meanwhile, latest figures show that 40-60% of cases are emerging in isolated household or family settings, with the remainder in long term residential care settings.

Dr Holohan said from a public health point of view, there is no longer a reason for schools to stay closed and NPHET “will work in support of that sector”.

“We’ve had good and extensive engagement with the Department (of Education) to implement it (the guidance). Every sector that will be important should take the advice and put in place plans.”

He said “hopefully” the evidence will give further reassurance that “this disease affects children less severely and they play less of a role in transmission but it will be kept under review”. 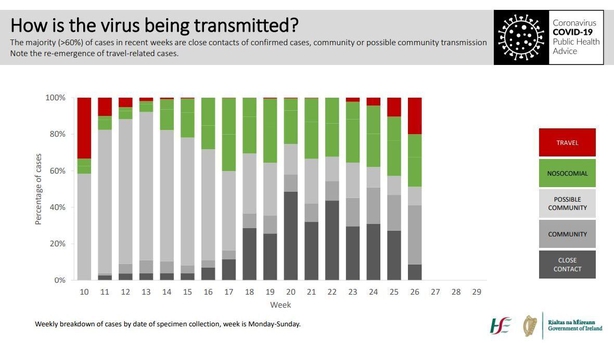 On face coverings, Dr Holohan said the number of people wearing them is “probably increasing” but is still at a very low level.

“We want to encourage every person in an indoor setting and on public transport to wear face masks. Our strong continuing advice is for people to wear face coverings in retail environments” because “there will be situations where it will be difficult to maintain a two-metre distance.”

He said the importance of personal responsibility has been emphasised.

Prof Nolan says different estimates are giving different answers on the reproduction number of the virus. He says the number could be as low as 0.6, but more recent estimates show it is equally likely that it is rising closer to 1 | More: https://t.co/SQ95kbld9g pic.twitter.com/xGlkUWmXCq

Asked about social media posts regarding pubs serving multiple pints with a small portion of food, Dr Holohan said: “We’re not naive” but “we’re not at point where it’s safe to say pubs can open.”

However, it will be down to the public as individuals to understand the nature of the disease and to see if a place looks safe, he added.