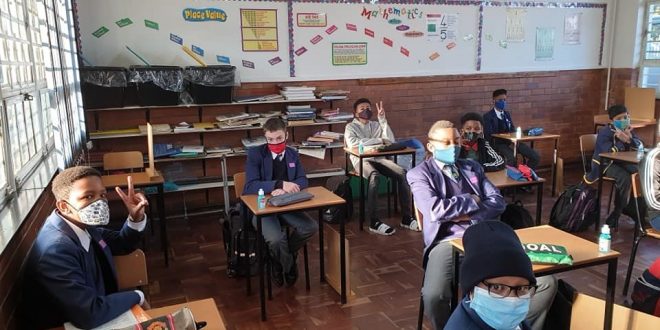 As schools adjust to the new normal of pupils physical distancing while in and out of class, a Johannesburg primary school has come up with an innovative way of getting pupils used to the new way of interacting amid the Covid-19 pandemic.

While most schools have reminders up to keep 1.4 or 1.5 metre distances, Tom Newby Primary School in Benoni is also making use of hula hoops.

Principal Giselle Mynhardt told News24 on Thursday that the hoops were used because ground stickers tended to peel off the corridor flooring and that some classes had grass outside their door which meant it could not be painted.

Mynhardt said the hula hoops also functions as a concrete representation of the physical distancing that needs to be maintained between the pupils – because many people cannot visualise a 1.5m length.

“We are hoping that if they use this ‘real’ barrier for a while that the physical distance dimension and concept will be inculcated and we can do away with them later in the year,” the principal said.

The hula hoops are used when pupils arrive in the mornings and when they are on break. When out for break, they sit in the hoop which becomes their base to ensure they and others maintain their distance.

“Our Grade R learners will have hula hoops with material bibs attached to them so that it hangs like a dress – they will wear these at break when they play,” she said.

READ | Children kept away from school won’t be deregistered – Motshekga

It has been a week since schools opened their doors to Grade 7 and 12s after closing in March due to the spread of the virus in the country.

Mynhardt described the Grade 7s as “fairly reserved” on Monday and Tuesday after arriving but that they became more relaxed from Wednesday and started particpating more naturally in lessons.

The school said its planning and preparations for pupils’ return has ensured that there was a calmness and smoothness in the reopening.

Daily temperature checks and screenings for pupils and staff are done as required by the regulations.

Pupils are also allowed to wear civvies “to avoid having to wear the same clothing every day”.

Do you miss your grandkids? Are you desperate to see them again? Are they missing you? Share your story with us! Post in the comments or mail us at chatback@parent24.com pic.twitter.com/ECzr8wK7EZ

“Learners have been divided into two groups, A and B, to reduce the number of children in one class at a time – this ensures that physical distancing can be practised.

“Groups attend on alternate weeks and academic activities are sent home for completion for the group that is not physically at school,” the principal outlined.

Once classes come to an end in the afternoon, teachers escort pupils to the exit where parents and guardians collect them from the gate – because no parent is allowed to enter the premises. Once at the gates, the pupils are once again screened and sanitised, the principal said.

“Late collection is processed from the school hall, where desks have been set up so that learners are about two meters apart from each other. A security officer at the exit gate contacts the teachers on duty in the hall when a parent arrives.”

Previous B.C. records its deadliest month for illicit drug overdoses in May
Next COVID-19 spikes, but most governors signal they’re staying the course | TheHill