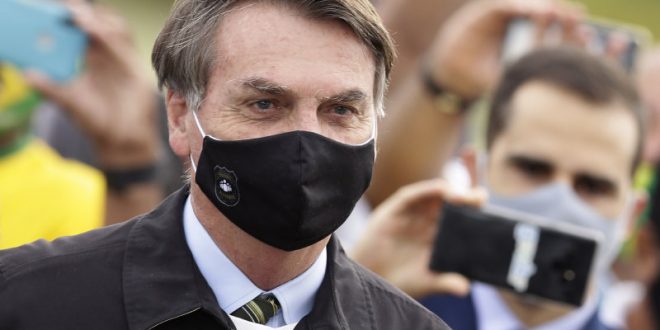 On a visit to Brazil last year, I had a chat with a prominent financier about the parallels between Donald Trump and Jair Bolsonaro.

“They are very similar,” she said, before adding: “But Bolsonaro is much stupider.” This answer took me aback since the US President is not generally regarded as a towering intellect. But my banker friend was insistent.

“Look,” she said. “Trump has run a major business. Bolsonaro never made it above captain in the army.”

The coronavirus pandemic has reminded me of that observation. Brazil’s President has taken an approach that is strikingly similar to that of Mr Trump — but even more irresponsible and dangerous. Both leaders have become obsessed with the supposedly curative properties of the antimalarial drug hydroxychloroquine.

But while Mr Trump is merely taking it himself, Mr Bolsonaro has forced the Brazilian health ministry to issue new guidelines, recommending the drug for coronavirus patients.

The US President has squabbled with his scientific advisers. But Mr Bolsonaro has sacked one health minister and provoked his replacement to resign. Mr Trump has expressed sympathy for anti-lockdown protesters; Mr Bolsonaro has addressed their rallies.

Sadly, Brazil is already paying a high price for its President’s antics — and things are getting worse fast. Coronavirus hit Brazil relatively late. But the country has the second-highest infection rate in the world and the sixth-highest recorded COVID-19 deaths.

The number of deaths in Brazil, which accounts for roughly half the population of Latin America, is now doubling every two weeks, compared with every two months in the hard-hit UK.

Brazil’s economic and social make-up means that the country will be severely hit as the pandemic accelerates. The hospital system in São Paulo, Brazil’s biggest city, is already close to collapse. With large parts of the population living in crowded conditions, and without savings, mass unemployment could lead to hunger and desperation over the coming months.

But is it fair to blame Mr Bolsonaro? The President, who was sworn into office on January 1 2019, is obviously not responsible for the virus — nor for the poverty and overcrowding that make COVID-19 such a threat to the country.

He has also not been able to prevent many of Brazil’s governors and mayors from imposing lockdowns in local areas.

But by encouraging his followers to flout the lockdowns and undermining his own ministers, Mr Bolsonaro is responsible for the chaotic response that has allowed the pandemic to get out of hand. As a result, the health and economic damage suffered by Brazil is likely to be harsher and deeper than it should have been.

Other countries facing even tougher social conditions, such as South Africa, have had a much more disciplined and effective response.

If life were a morality tale, Mr Bolsonaro’s coronavirus antics would lead Brazil to turn against its populist President. But reality may not be so simple.

There is no doubt that Mr Bolsonaro is in political trouble. His popularity ratings have tumbled and are now below 30 per cent; some 50 per cent of the population disapprove of his handling of the crisis. The support he once enjoyed from mainstream conservatives — who were desperate to see the back of the leftwing Workers’ party — is now crumbling away.

Sergio Moro, his popular corruption-fighting justice minister, resigned last month. Mr Moro’s allegations about the President’s efforts to interfere in police investigations were sufficiently explosive to provoke the Supreme Court into opening an investigation that could lead to his impeachment.

But impeachment in Brazil is as much a political as a legal process. The misdemeanours that led to the removal of Dilma Rousseff as president in 2016 were fairly technical. It was more significant that Ms Rousseff had sunk to a 10 per cent approval rating in the polls and the economy had suffered a deep recession.

Mr Bolsonaro’s ratings are still way above Ms Rousseff’s nadir. And while the economy is undoubtedly heading for a deep recession and a surge in unemployment, his anti-lockdown rhetoric may buy him some political protection.

Oliver Stuenkel, a professor at the Getúlio Vargas Foundation in São Paulo, says, “What Bolsonaro wants to do is to disassociate himself from the economic crisis that is approaching.”

The social isolation measures that Mr Bolsonaro decries, may actually help him politically. They could prevent the mass demonstrations that provided the impetus for the drive to impeach Ms Rousseff. And they will make it harder for politicians to plot and bargain in the proverbial “smoke-filled rooms” — a process that is necessary to stitch together a successful impeachment.

Plotting over the phone is just not the same. Some politicians may feel that plunging Brazil into a political crisis is unseemly, in the middle of a pandemic.

Yet national unity will not emerge while Mr Bolsonaro is President. In classic populist fashion he thrives on the politics of division. Brazil is already a deeply polarised country, where conspiracy theories are rife. The deaths and unemployment caused by COVID-19 are exacerbated by Mr Bolso­naro’s leadership.

But, perversely, a health and economic disaster could create an even more hospitable environment for the politics of fear and unreason.

Gideon Rachman is chief foreign affairs columnist for the Financial Times. His particular interests include American foreign policy, the European Union and globalisation.

Previous Coronavirus vaccine trials begin in Melbourne
Next COVID-19 killed more than a quarter of this seniors’ home’s residents. Here’s how it, and the province, missed warning signs