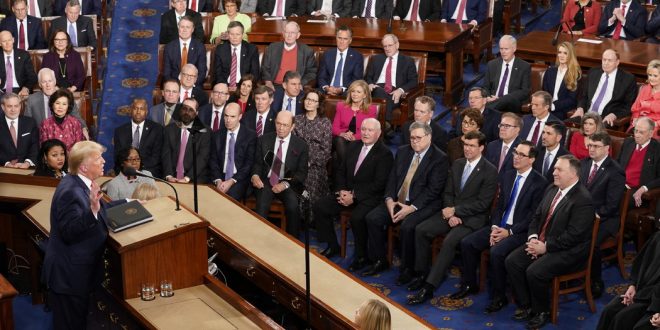 Live State of the Union 2020: Updates on Trump’s Speech

Mr. Trump dispensed with ‘carnage’ in favor of ‘comeback’ as he argued that he has revitalized America.

With the November election just nine months away, President Trump used his speech to frame the choice as he sees it, claiming credit for what he called a “Great American Comeback” and revival of American spirit while defining the coming campaign against the Democrats as a battle to stop the rise of socialism in the United States.

Mr. Trump, who decried what he called “American carnage” when he was inaugurated in January 2017, described a different country on Tuesday night, saying the nation is one again making progress at home.

The cited his tax cuts, deregulation, renegotiation of the North American Free Trade Agreement and a partial trade agreement with China, while arguing against Democratic plans to expand access to health care.

“To those watching at home tonight, I want you to know: We will never let socialism destroy American health care,” he said.

Picking up another favorite theme, Mr. Trump reaffirmed his campaign to restrict the flow of new people into the country, assailing California, New York and other jurisdictions he calls “sanctuary cities” that limit their cooperation with federal immigration authorities. He called for the enactment of legislation that would allow them to be sued by victims of crimes committed by undocumented immigrants.

“The United States of America should be a sanctuary for law-abiding Americans, not criminal aliens,” he said, introducing a senior Border Patrol official and the brother of a man killed at a gas station.

It was a night of awkward encounters and pointed snubs. As he arrived at the rostrum, Mr. Trump turned to hand copies of his speech to Speaker Nancy Pelosi and Vice President Mike Pence but when Ms. Pelosi offered her hand to shake, he turned away without taking it. She shrugged.

Moments later, Ms. Pelosi announced Mr. Trump to the assembled lawmakers with the simple words, “Members of Congress, the president of the United States” — eschewing the more florid language that speakers, including her, have used in the past: “Members of Congress, I have the high privilege and the distinct honor of presenting to you the president of the United States.”

Mr. Trump came across another central figure in his impeachment drama on his way to the rostrum as he saw Chief Justice John G. Roberts Jr., who is presiding over the Senate impeachment trial. The president paused to speak to the chief justice, to which the chief justice appeared to say “thank you” even as he kept a studiously neutral face.

And among the official escorts assigned to bring Mr. Trump into the chamber was Representative Hakeem Jeffries of New York, one of the seven House Democrats prosecuting the president in the Senate trial.

Republicans, by contrast, greeted Mr. Trump enthusiastically, chanting, “Four more years! Four more years!” as he took the rostrum, as if it were a campaign rally.

Awaiting acquittal, Mr. Trump planned a low-key address, saving his views on impeachment for another speech.

Mr. Trump’s appearance in the same House chamber where he was impeached nearly seven weeks ago marked a surreal moment in Washington as he addresses many of the same lawmakers still trying to remove him from office. Despite the fireworks, Mr. Trump all but ignored the battle over the future of his presidency, at least out loud. He told network anchors earlier in the day that he plans to save his thoughts on the matter for a separate speech he wants to give after the final vote on Wednesday, when the Senate is poised to acquit him.

The unusual confluence of the president’s annual speech with an impeachment trial was not a first. President Bill Clinton likewise delivered his State of the Union address in 1999 in the midst of a Senate impeachment trial that later acquitted him. Mr. Clinton made no mention of the trial either.

Mr. Trump sought to show support for Venezuela’s opposition by inviting Juan Guaidó to the speech.

For weeks, the Trump administration has fought speculation that it was no longer backing Juan Guaidó, the leader of Venezuelan’s opposition movement, frustrated that he has yet to push President Nicolas Maduro from power. On Tuesday, the White House gave Mr. Guaidó its most visible show of support yet: a seat in Mr. Trump’s guest box for the State of the Union address.

“Please take this message back that all Americans are united with the Venezuelan people in their righteous struggle for freedom,” Mr. Trump said, turning to face Mr. Guaidó as Ms. Pelosi and other Democrats joined Republicans in a standing ovation. “Socialism destroys nations. But always remember, freedom unifies the soul.”

Mr. Guaidó left Venezuela last month, defying a travel ban imposed by Mr. Maduro’s disputed government, to round up international support. More than a year ago, as president of the Venezuelan National Assembly, Mr. Guaidó declared that because Mr. Maduro’s re-election in 2018 was under dispute, he could not claim power. Instead, under the Venezuelan constitution, Mr. Guaidó, declared himself the country’s interim leader.

More than 50 countries, including the United States, recognize Mr. Guaidó as the rightful president of Venezuela. The Trump administration has imposed dozens of economic sanctions against Mr. Maduro and his government to help Mr. Guaidó push him from office.

Rush Limbaugh was honored with the Presidential Medal of Freedom.

Another surprise guest in the first lady’s box, seated next to Melania Trump, was Rush Limbaugh, the conservative talk show host who announced on Monday that he has been diagnosed with advanced lung cancer.

Mr. Limbaugh has been a strong supporter of Mr. Trump, even appearing with him at a campaign rally during last year’s midterm election, and the president offered a tribute to him in his speech.

“Thank you for your decades of tireless devotion to our country,” Mr. Trump said. “And Rush, in recognition of all that you have done for our nation, the millions of people a day that you speak to and that you inspire, and all of the incredible work that you have done for charity, I am proud to announce tonight that you will be receiving our country’s highest civilian honor, the Presidential Medal of Freedom.”

Mr. Limbaugh looked surprised and emotional, his mouth hanging open as he passed his hands across his face. In an unusual break from tradition, Melania Trump then stood and fastened the medal around his neck. Mr. Limbaugh mouthed “thank you” while he flashed a thumbs up toward the floor. Ms. Pelosi and other Democrats, who have been some of Mr. Limbaugh’s regular targets and fiercest critics, did not stand.

Also in the box were Carl and Marsha Mueller, who held up a picture of their daughter, Kayla, a humanitarian aid worker kidnapped, tortured and killed by the Islamic State. Sitting nearby were Kelli Hake and Gage Hake, the wife and son of Chris Hake, a soldier ki

Sergeant Hake now rests in eternal glory in Arlington, and his wife Kelli is in the gallery tonight, joined by their son, who is now 13 years old. To Kelli and Gage: Chris Present as well were Charles McGee, one of the last surviving of the Tuskegee airmen, along with his great-grandson, Iain Lanphier, who wants to join the Space Force that Mr. Trump has just created.

Mr. Trump reveled in the Democratic dysfunction in Iowa, calling it ‘a fiasco that just plays right into us.’

Even before heading in his motorcade to the Capitol for the big speech, Mr. Trump was enjoying the day, reveling in the dysfunction of the Iowa Democratic caucuses and relishing new polling that showed his public approval at the highest point of his presidency.

The long-delayed counting of the opening round of the Democratic presidential nomination race gave Mr. Trump ammunition for his efforts to sow dissension among Democrats by claiming, without proof, that the party establishment was trying to rig the race against Senator Bernie Sanders, the self-proclaimed socialist he would like to face in the fall.

“It’s a fiasco that just plays right into us,” Mr. Trump told the network anchors, according to people in the room.

Mr. Trump said he did not know who would win the Democratic nomination but said that Mr. Sanders is “nastier and smarter” than the other candidates and expressed amazement that former Mayor Pete Buttigieg of South Bend, Ind., was doing so well. Mr. Pence, a former governor of Indiana, then interjected that South Bend was a troubled city.

The president noted that he was looking forward to another Democrat-on-Democrat showdown, predicting that Representative Alexandria Ocasio-Cortez, the first-term liberal firebrand from New York, would take on Senator Chuck Schumer, the party leader in the Senate, in a primary in 2022. “She will kick his ass,” Mr. Trump predicted.

After Trump finishes, two Democrats will respond, criticizing his policies and rhetoric about immigrants.

Once Mr. Trump is done speaking, the Democrats will get their chance to respond and they selected one of the party’s rising stars straight from the Midwest where the fall presidential contest will likely be waged most intensely.

Gov. Gretchen Whitmer of Michigan, who won her office in 2018 with a convincing 10-point victory over Mr. Trump’s favored candidate in a state that he had won in 2016, represents what party leaders consider the archetype for a successful candidate in the Trump era, a “fix the damn roads” pragmatist, to use her own words, who can work with Republicans on bread-and-butter issues.

In excerpts from her speech released in advance, Governor Whitmer takes on Mr. Trump’s rosy view of the economy. “It doesn’t matter what the president says about the stock market,” she plans to say. “What matters is that millions of people struggle to get by or don’t have enough money at the end of the month after paying for transportation, student loans or prescription drugs.”

To deliver the party’s Spanish-language response, Democratic leaders tapped Representative Veronica Escobar of Texas, who declined to join Mr. Trump when he visited El Paso last August after a mass shooting by a gunman warning of a “Hispanic invasion.”

In her own prepared remarks, Ms. Escobar says the shooter parroted some of the rhetoric used by the president. “Just before he began his killing spree, he posted his views online and used hateful language like the very words used by President Trump to describe immigrants and Latinos,” she plans to say.

Previous Sources: Red Sox agree to trade Mookie Betts, David Price to Dodgers
Next The Memphis Grizzlies have agreed to a deal